Almost any layout will include locations where roads cross tracks. This requires modeling a grade crossing (or else let your scale motorists bump over the rails). I have made three different kinds of grade crossings on my layout, and I will say a little about them in this post.
Not knowing a great deal about the prototype situation for how grade crossings come about and are maintained, I asked well-known modeler Jack Burgess, retired from an engineer’s job with the City of Newark. Here is what I learned.
In the prototype, grade crossing installations depend on the history. If a road exists prior to the railroad being built, the railroad has to both build and maintain the road crossing. But if a road is built after the railroad is in place, the city or county has to build it and also maintain it. The former case naturally results in great local frustration, because the railroad rarely cares as much about a smooth roadway as do the local citizenry, and it can be hard to get them to do maintenance.
Now let’s look at modeling. To make a general observation regarding layout operation in relation to grade crossings, it is important to provide adequate clearance for the rolling stock. You should leave a wider flangeway than would be the case in the prototype, and of course to make sure that all parts of the crossing between the rails are lower than the rail height. (This is also helpful when cleaning track.) Of course, if you don’t observe these rules, operating a train through the crossing will generally bring them to your attention.
One type I have modeled is the type made up entirely of wood planks. I used Model Hobbies wood ties (which are stained black), appropriately split to make them shallow, and fitted them into the spaces of a somewhat complex trackwork that is crossed. This is the crossing of Nipomo Road in my town of Ballard. There are tar repairs in some of the paving, and the split ties are weathered to look about like the road surface. At the bottom of the photo, you can just see the culvert where Cienega Creek comes under the tracks, and at left there is a drainage ditch culvert under the road. 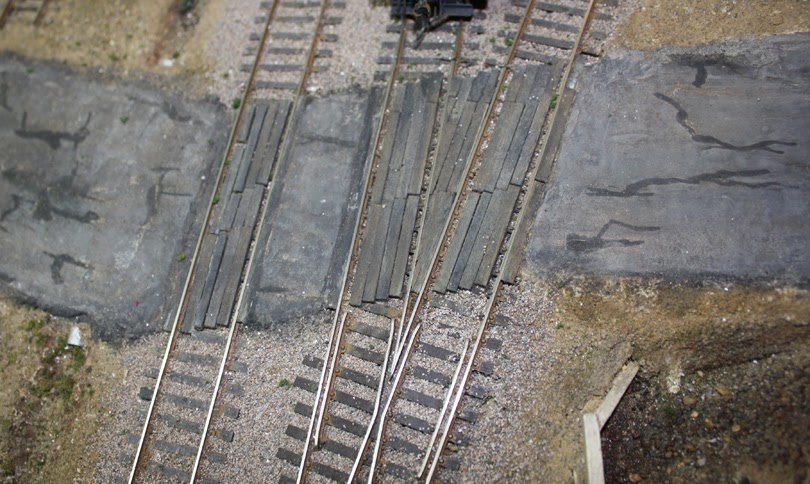 A second type, which I have seen a lot of places, is a mixture of paving and planks, with the (replaceable) planks at the edges alongside the rails. This is the crossing of Chamisal Road in my layout town of Shumala. Here again, I have tried to represent tar-repaired cracks, and also a certain amount of oil and grease dropping. A center line has been provided. That’s the depot parking lot at upper left, and just the very edge of the green depot roof is visible in the lower left corner.


The third type, which I have seen occasionally, is all paving, with old rail used to contain the paving between the rails and keep the flangeway open. I would use the next smaller size of rail, compared to the track, for this application, such as Code 55 in Code 70 track. This is Bromela Road in my town of Ballard, in a view looking right over the depot roof. The roadway surface is plaster. The road will probably get a center line one of these days, and for my era, 1953, it will be white. The road obviously needs weathering too. 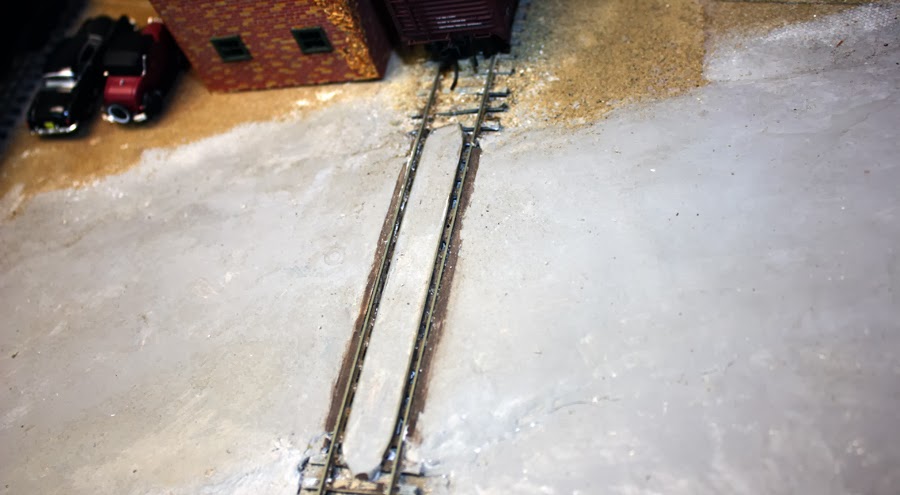 The one thing missing at my crossings is protection, minimally in the form of crossbucks, or flashers at a busier crossing. The crossings shown above are all near the layout edge, meaning that an HO scale crossbuck would be pretty vulnerable. I did build one crossbuck when I was in Pittsburgh, using (oversize) square brass tubing for the post and soldering two strips of heavy brass sheet to the post for the crossbuck itself. All corners were real sharp. That sucker wasn’t vulnerable; it was your forearm that was vulnerable if you bumped into it! But it got lost in the move and so far hasn’t surfaced. I may get to making more of those.
I enjoy building these crossings and have put some effort into getting them to look right. If you live at all near a railroad, you can drive over and look at a few crossings for yourself. You will certainly get some ideas of how they look, and how they get worn or damaged.
Tony Thompson
Posted by Tony Thompson at 8:06 AM