For more than three years now, Rapido Trains has had an announcement “on the table,” for 37-foot General American meat refrigerator cars in HO scale. Moreover, I alluded to that announcement in a post to this blog almost exactly three years ago, when I was describing the start of my project to create some of my own meat refrigerator cars from the old LifeLike models (at: http://modelingthesp.blogspot.com/2011/02/modeling-meat-reefers.html ). And as it happened, contrary to the long-standing hobby rule that as soon as you put a lot of time into any project, it will be introduced in commercial form, neatly eclipsing your efforts, I did get my own meat car models done and into service last spring, long before the Rapido cars arrived (as you can see at: http://modelingthesp.blogspot.com/2013/05/modeling-meat-reefers-part-5.html ). I most recently mentioned the Rapido cars in my comments about the 2014 meeting in Cocoa Beach, Florida, that some of the cars had actually shown up as door prizes at the meeting (you can read it at: http://modelingthesp.blogspot.com/2014/01/cocoa-beach-2014-part-2.html ).
Long ago, I reserved three Rapido cars at my nearest serious hobby shop, Just Trains in Concord, California, and now the cars have arrived. They really look great! and were certainly worth waiting for. But they did need a little work.
The couplers are imitations of Kadee No. 5 couplers, produced by Rapido’s Chinese factory, and though most of the ones I got work all right, one was very stiff and did not improve by repeated flexing. I replaced both couplers on that car with Kadee No. 58, and will probably replace the others eventually. Trucks look good but do have Code 110 wheels, thus are candidates for wheel replacement, though I have not yet done so. I added reweigh dates correct for my layout, and lightly weathered the cars.
I will just show one of them, GARX 3494, a car I particularly like because it is not one of the “billboard” paint schemes, but represents a plain, workaday leased car. This is the kind of car that does not jump out at you in a passing train — I already have too many cars of that kind, and am trying to keep them under control! 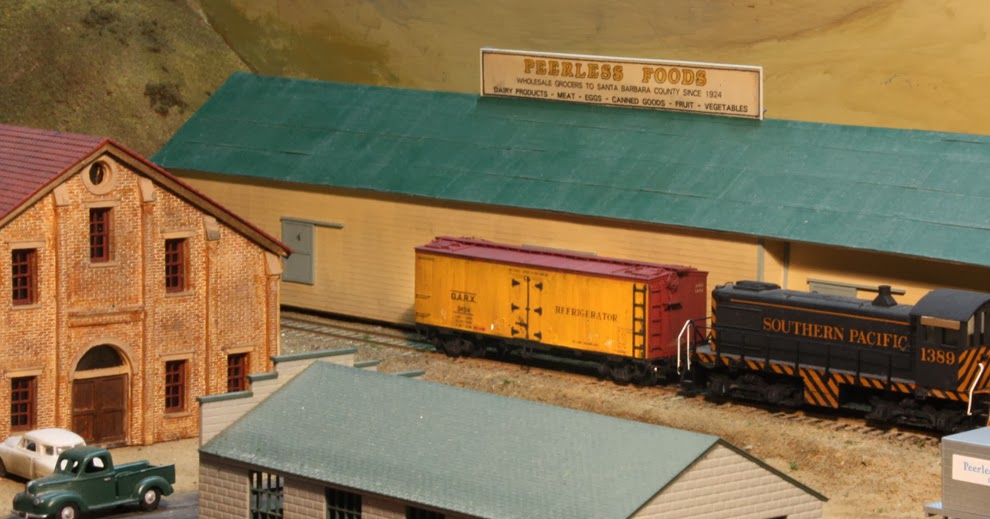 The car is being spotted at Peerless Foods in my layout town of Ballard. Incidentally, the Peerless delivery truck is visible at lower right. You can click on the photo to enlarge it.
In the photo, the car is destined for the warehouse door at the left, Door No. 4, which is where meat and any refrigerated products are unloaded at Peerless. Fresh produce is unloaded at Door 3 (behind GARX 3494 in this view), while canned goods and dry goods are at Doors 1 and 2, behind the switcher. My waybills reflect specific spots like this. Here is an example: 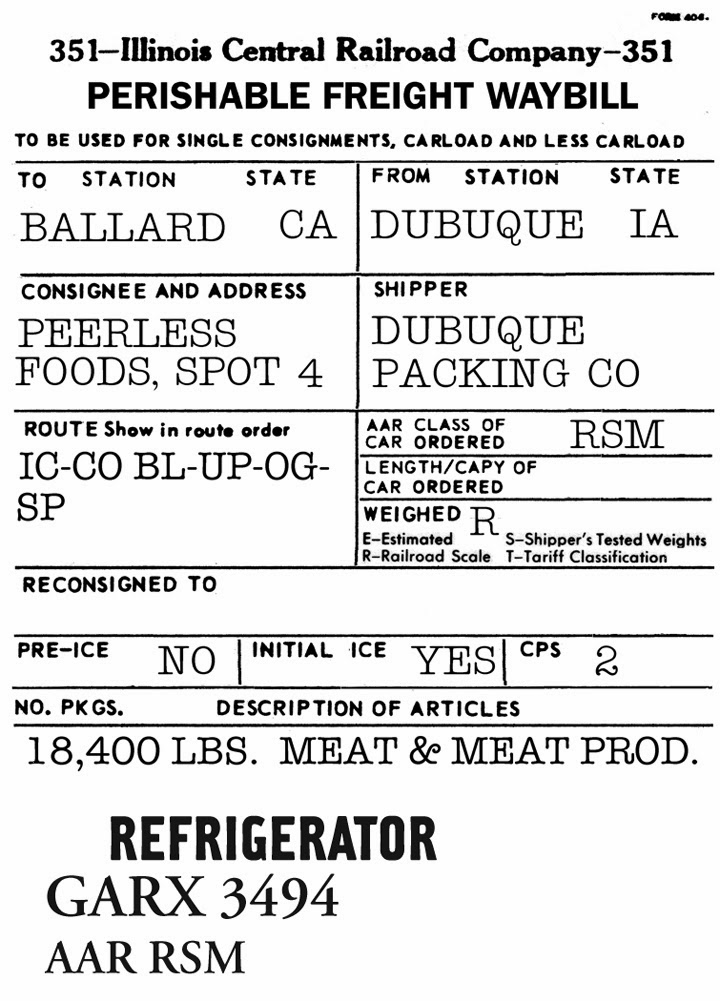 Part of the fun of operation for me is this kind of detail in spotting cars, which is entirely prototypical. If you would like to know more about my approach(es) to model waybills, I would recommend the summary post which is at: http://modelingthesp.blogspot.com/2013/02/waybills-27-collected-posts.html .
Tony Thompson
Posted by Tony Thompson at 12:35 PM