I mentioned in an earlier post that my layout had been open for visitors one evening during the LDSIG / OPSIG meeting in January, and that I had prepared a one-page layout description for folks to take away. (That post is at: http://modelingthesp.blogspot.com/2014/02/a-layout-open-house.html .)
With the layout surface cleaned up and made ready for viewing, the aisles also cleared out for visitors, and the black drapes attached below the layout fascia, the Shumala side of the layout looked like this. 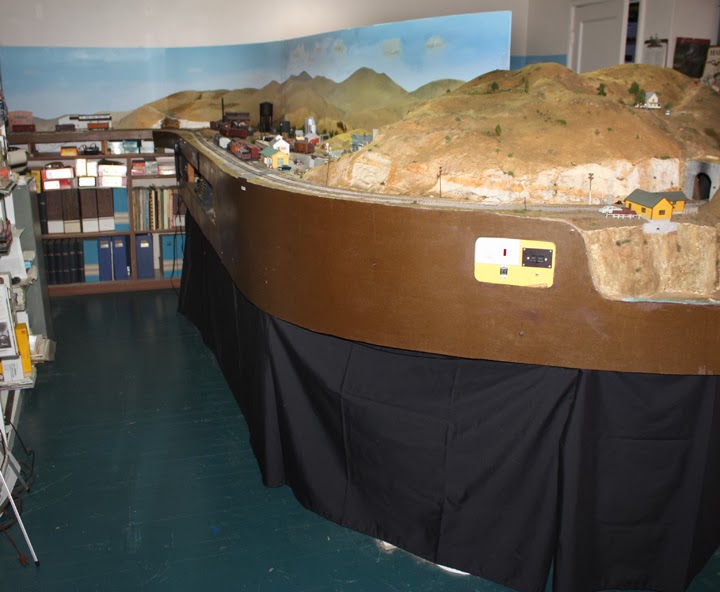 Walking around to the other side of the peninsula to Ballard, this view could be seen, again with the black drapes in place. These are simply attached with Velcro strips to the underside of the fascia — which is one reason to maintain a consistent height of the bottom of the fascia! The staging table, so far without its own fascia, is visible underneath the track board for Ballard. The description I prepared mostly contains material already available in various posts on this blog, though scattered among a number of posts. The main such post is the one about my choice of layout locale, which can be found at: http://modelingthesp.blogspot.com/2011/01/layout-design-locale.html .
The text of that description is included below. I have also prepared a downloadable PDF document for Google Drive, so if you would prefer it that way, here is the link:

Here is the description text as it was handed out.

A little history: between 1980 and 1994, I built a 16 x 19-foot layout in Pittsburgh, PA, representing San Luis Obispo and environs on Southern Pacific’s Coast Line. It was set in 1953, the last year that SP still operated a predominance of steam in coastal California.
After Mary and I moved to Berkeley in 1994, we first lived in a house without a good space for a layout. But when we moved to our present house, I was finally able to get going on a layout again in 2009. I used parts of the old layout, along with some new construction, to build the present one. I chose NCE as my control system.
The layout represents a mythical branch line, leaving the Coast Line in the Central Coast area between San Luis Obispo and Santa Maria. The branch is imagined to serve the agricultural production of the area north of Santa Maria, largely field vegetables, with some tree fruit.
Town names are chosen as a selection of the kinds of names often encountered in this area of California: Shumala (Chumash Indian), Santa Rosalia (Spanish) and Ballard (American settlers). The junction with the main line is at Shumala, while the branch ends at Santa Rosalia, which thus becomes the name of the branch. This area contains two familiar California plant communities, oak woodland (which means a lot of golden grass), and coastal sage. Some effort has gone into trying to represent these communities realistically, particularly on the backdrops.
In addition to the agricultural products shipped from packing houses, some light manufacturing is also included, along with traditional small-town businesses like bulk oil dealers, wholesale grocers, and a California Division of Highways garage. The SP roundhouse at the Shumala junction receives shipments of fuel and shop parts, and the perishable shipments require an ice deck to pre-ice or initial ice refrigerator cars.
A special interest of mine is freight cars, not only of the SP but of North American railroads generally, so extensive effort has been devoted to assembling a fleet of appropriate and accurate freight cars. Of course SP and Pacific Fruit Express are major components, but so are other western railroads, such as Santa Fe, UP,  and Western Pacific.
The branch itself is “dark territory,” meaning that it is unsignaled, and because the track plan includes only a short segment of the Coast main line, schedules are not very important. Nevertheless, a timetable has been developed, including train descriptions and relevant special instructions for the guidance of crews.
The mainline trains which are through freights can be simply run as a line-up. And of course the Coast Line main does host the Daylight and Lark trains, along with the “Coast Mail” and the “Overnight.” Together, the Guadalupe local and the Surf turn provide the vital interchange function for the branch. Both those trains originate at and return to San Luis Obispo, north of Shumala.  Through freights are powered by cab-forwards, 2-10-2s, and F-unit diesels. Local freights mostly use Consolidations and Ten-wheelers.
The largest amount of switching on the layout is at Ballard, the track arrangement for which is modified from Terry Walsh’s “West Agony & Inchoate” layout, published in Model Railroader in July 1960. The other two towns have simpler track arrangements. The main line staging is accomplished in a “transfer table” arrangement underneath Ballard, where 12 staging tracks permit ample train selection.
My interest in prototypical waybills for model use has resulted in development of a system which has been working well on this layout. Crews receive a handful of waybills when they begin work at Shumala, and would collect additional ones from the agent at Ballard when they arrive there to switch. A bill box at each depot is used instead of pockets for waybills on the fascia.
Scenery and structure building are still in progress in some areas, but I hope completion of those features is not too far off. The trains and the waybills can hardly wait.

Posted by Tony Thompson at 8:46 AM