There are quite a few previous posts about the topic of waybills in this blog (you can find them by using the search box at upper right on this page, and using the word “waybills” or other search terms of your choice). As I point out from time to time, Mike White in Maryland has collected my first 26 posts into a single document, and it’s available in Waybill Post 27 (which can be found at: http://modelingthesp.blogspot.com/2013/02/waybills-27-collected-posts.html ).
The present post is occasioned by several recent conversations I have had with fellow modelers, and also by some experiments I’ve conducted on my own layout. I came to realize that there is, one might say, a creative tension between two different approaches to modeling waybills. I want to say a little about them both in this post.
There is a long-traditional method, usually called “car cards and waybills,” in which something representing the car, and something representing waybill information but without car identification, are combined. The history of these goes back to Doug Smith in 1961, and on current layouts is usually the “mini” version from Old Line Graphics or Micro-Mark. This can be simplified and simultaneously made much more prototypical, using the Bill Neale idea of baseball-card sleeves; I described that approach in an article in Railroad Model Craftsman in December 2009.
I am still using the transparent sleeve method, and this photo (from the RMC article) illustrates what the product looks like, and roughly how big it is, shown alongside the Rock Island box car it refers to: 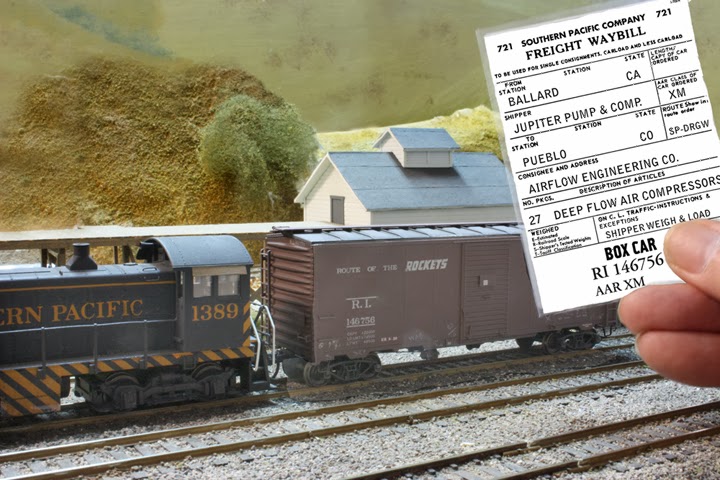 The photo above actually shows my earliest waybill design, which was not divided down the center like the prototype. They now look like this: 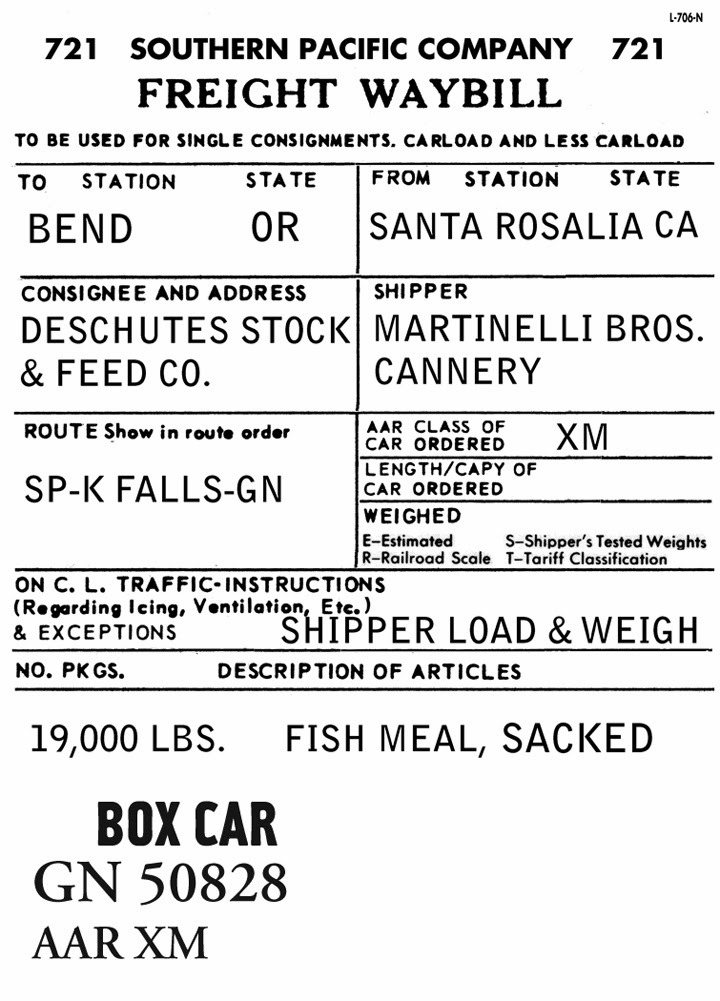 The three lines of car information at the bottom are on the sleeve, not on the waybill paperwork behind it.
This approach, whether using Old Line Graphics four-cycle bills or these sleeves with prototypical paperwork in them, can be regarded as “traffic-centric,” because the traffic needs of the railroad dictate the loads and empties which are moved — and not the cars which handle the traffic, in most cases. The load paperwork is matched up to the sleeve, representing the car, much like the prototype does it. And in staging a session with this approach, you select loads to move, not cars which already have assigned loads.
The other approach, very appealing in its simplicity and realism, is to do away with any car-card or other separate identification of the car along, and make a single document, the waybill, just as the prototype did and does, which has on it the car identification (initials and number). One version of such a system is the one I have implemented on Otis McGee’s layout (see the post at: http://modelingthesp.blogspot.com/2011/07/waybills-9.html ), and they look like this: 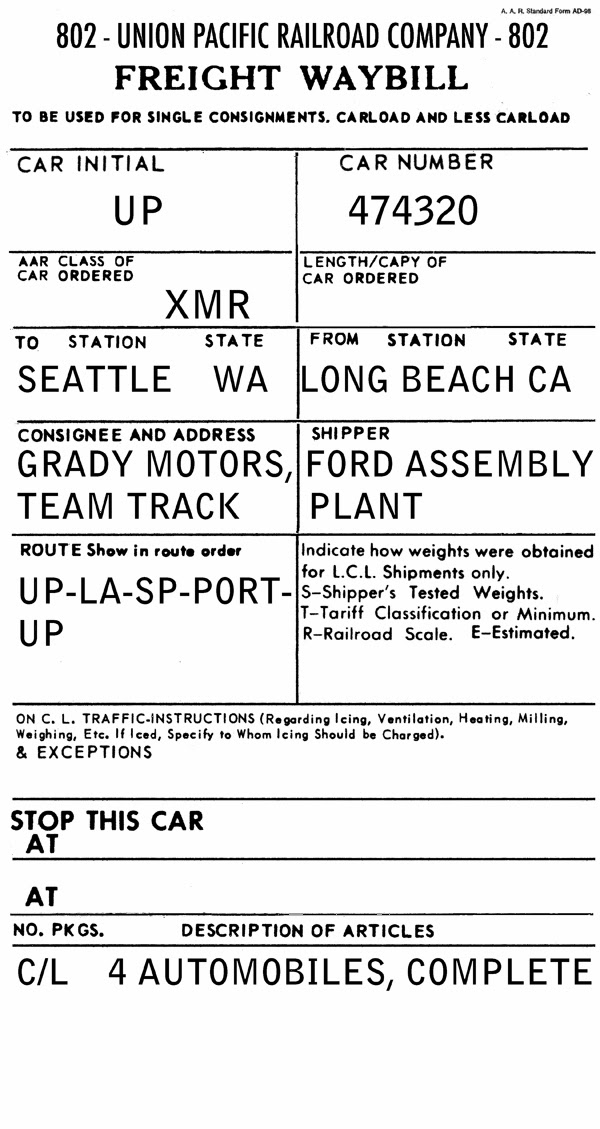 The size is 2 x 4 inches, matching the Old Line Graphics four-cycle car cards. Note that this load now moves only in one specific box car, unless multiple copies of this waybill are made, each with a different car initial and number on it. That’s why I think you can regard this system as “car-centric,” because the focus is on individual cars and what they may carry. When you re-stage this paperwork, each waybill assigned to this car is a pre-selected movement.
The “car-centricity” of this approach can be reduced by using the idea of a “master bill,” having only a header with car initials and number, and then a series of “load bills” which can be inserted in front of the lower part of the master. (I discussed this use of a modified “short bill” in a prior post, at: http://modelingthesp.blogspot.com/2011/08/waybills-11.html .) But this only works for cars which get loaded at industries which are on-line and thus always have the same originating railroad name in their waybill header. For other free-running loads which can originate anywhere around the country, thus originating on a wide range of railroads, this modification accomplishes little.
My own view is that if you model a bridge line or any situation in which large numbers of cars are moved across the layout in an operating session, it makes good sense to use a car-centric waybill method. If you model a switching layout, or any small layout in which modest numbers of cars are moved, a traffic-centric method may work better. My own layout is small and switching-oriented, and despite trying the simple waybills of a car-centric approach, I have found that the traffic-centric bills work better for me.
Does this mean that the new approaches are not yielding a “universal method?” Maybe so. But with ideas still emerging and new strategies still being explored, it is probably too soon to be sure of such a conclusion.
Some of the recent ideas about both of these approaches were described in one of Tony Koester’s “Trains of Thought” columns, entitled “In search of the perfect waybill,” in Model Railroader for February 2012 (page 82), and Ted Pamperin’s excellent article in that same issue of Model Railroader (page 45) further refines the car-centric waybill. If you’re interested in this topic and haven’t read one or both of these articles, I strongly recommend that you do so. And whether you choose car-centric or traffic-centric methods, there is genuine realism nowadays in how both methods are being used.
Tony Thompson
Posted by Tony Thompson at 10:19 AM

Email ThisBlogThis!Share to TwitterShare to FacebookShare to Pinterest
Labels: My layout, Waybills