I have now completed my individual descriptions of aspects of the method I use with acrylic washes to weather rolling stock. Links to the first five segments, in which the basic method was presented, were given in Part 6 (which is at this link: http://modelingthesp.blogspot.com/2014/10/my-acrylic-weathering-method-part-6.html ). Parts 6 through 9 covered special problems and details of the method, and links to parts 6 through 8 were provided in my Part 9: http://modelingthesp.blogspot.com/2014/10/my-acrylic-weathering-method-part-9.html .
The present Part 10 is an effort to summarize all this material, and show comparative examples of some of the work. In Parts 2, 3 and 4, I showed work in progress on a Red Caboose box car, lettered for Southern Pacific, and I have had some viewers observe that the car does not look very weathered to them. Here is that car as completed, including a paint patch for the reweigh date.

But though it may look like little has been done, here is that same car at right, alongside an unweathered box car from the same source.

This photo illustrates one strength of the acrylic wash method, that it can provide an overall “dirt” level and create a faded look. The level of dirtiness is something you can choose during application, and if it turns out not to be as much as you wanted, you can always repeat the application. The car shown above at right, SP 96606, has a post-1946 paint scheme though built early in 1942, and accordingly is not represented as terribly dirty.
That brings up an important point. For nearly all freight cars, the level of dirt seen on a particular car would scale with the time in service since it was last painted. It is thus necessary to recognize a car which has been repainted, even one of considerable age. Here is another comparison; you can click on the image to enlarge it.

The car on the left is a Class A-50-14 automobile car, built in 1941, and still has its original paint scheme, with the SP initials as reporting mark. On the right is a Class B-50-15 box car, built back in 1925 but with a post-1946 paint scheme. So even though the car on the right is 16 years older than the car on the left, its paint scheme is actually newer, and thus a little less dirty, than is the auto car at left.
Another example of moderate weathering is the car on the left in this next image, a model of one of the 100 box cars the NWP obtained from the USRA. Photos document that NWP tended to keep its equipment painted and in good repair (evidenced also by the fact that 98 of those 100 cars remained in service by the time I model, 1953). Both models are the Accurail double-sheathed USRA car, with the one on the right unweathered.

Finally, I will show the three models I have built of SP’s famous black Overnight box cars. The prototype cars did not seem to show dirt too badly, though as this photo from the late 1950s shows, eventually they got dingy. (Photo from the Bruce Petty collection) That’s an EXPLOSIVES placard on the door, reflecting the car’s assignment to ammunition service. 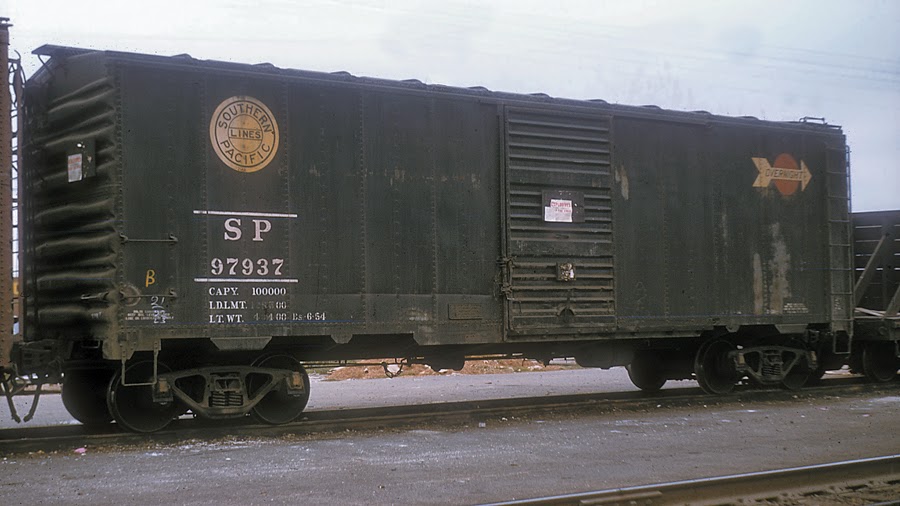 Here are my three models, varying in amount of dirt from right to left, but none of them terribly dirty.

These examples illustrate some of the ways I want my model freight cars to look (of course, previous parts of this thread did so also). These four cases are not extensive, but I think they illustrate the general results of my weathering method. I will add comments on additional specific points as they come along in future modeling.
Tony Thompson
Posted by Tony Thompson at 2:15 PM