I have previously posted about the history of the Associated Oil Company and its tank car fleet. Two of the posts show various parts of the fleet. One of the 8000-gallon cars was shown in the first post on Associated history (see it at: http://modelingthesp.blogspot.com/2013/12/associated-oil-company-background.html ) and more of the cars were discussed in the second post (at: http://modelingthesp.blogspot.com/2014/02/associated-oil-company-tank-car-fleet.html ).
Preparatory to modeling one of the later Associated cars, I showed some additional prototype information on the fleet (the post can be found at this link: http://modelingthesp.blogspot.com/2014/03/associated-oil-company-tank-cars-part-2.html ) and then presented my model (which is shown at: http://modelingthesp.blogspot.com/2014/04/associated-oil-tank-cars-modeling.html ). That model represents a car from the AOX 800 series, acquired in the late 1930s.
The basic facts of the Associated fleet prior to its intermingling with the fleets of Tide Water Oil ownership were as follows. The first cars owned by Associated copied a Santa Fe design; there were 40 of them, 9500 gallons in size, all of which were traded to SP in 1906 as part of their acquisition of the second car group. That group was more than 300 cars of 12,500-gallon capacity, just like and acquired at the same time as the Southern Pacific Class O-50-2 cars, numbered AOX 153–457. Thirdly, there was a group of 8000-gallon cars, numbered 113–152, acquired in the ’teens. All three were illustrated in the posts with links at the top of this page.
In addition, after 1920 or so, a group of 8000-gallon cars appeared in the Equipment Register, numbered 458–482 (this group grew slowly during the 1920s, eventually reaching 25 cars). In the mid-1920s, 8000-gallon compartment cars 483–495 appeared. Until recently, I had never seen a photo of any of these cars. But Richard Hendrickson gifted such a photo to me, and it is shown below. He did not know the location, date, or photographer. You can click to enlarge. 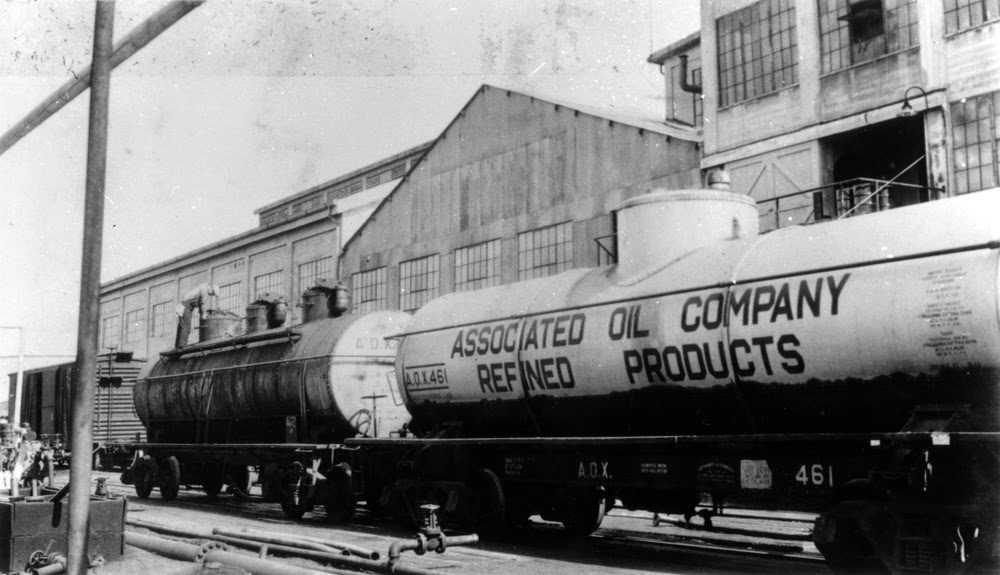 Clearly shown is AOX 461, either white or light gray in color, lettered much like the AOX 147 car shown in the first post cited at the top of this post, although that car was black. Of perhaps even greater interest is the three-compartment car behind AOX 461. Unfortunately, the car number is not visible, but on the car end the AOX reporting mark is very clear. This must be part of the AOX 483–495 group, and it too is painted a light color.
Sometimes after an extended search for photographs of a particular subject, if you have been thorough and creative in your search, you begin to think you have found about all that is out there. Then something like the photo above surfaces, filling in gaps in your knowledge, and you realize that there always remains the possibility that you have not discovered all that exists on your topic; and with the knowledge you already have, you know immediately the significance of such a photo. For me at least, this is one of the joys of railroad research.
Tony Thompson
Posted by Tony Thompson at 10:11 AM