The SPH&TS (Southern Pacific Historical & Technical Society) has just concluded its 34th National Convention at San Luis Obispo, California, covering October 29 through November 1. It is the second meeting we have held there, and both have been well organized, well run, and fun to attend. An extra highlight was visiting the new Railroad Museum, located in the old SP freight station at San Luis. A superb job has been done with exhibits and with a marvelous model railroad display too, and I will say more about that in Part 2.
One of the activities I had been asked to help with was the long-traditional “Wall of Trains” exhibit which is almost always displayed at the annual meeting. (I have mentioned and shown this exhibit before, in describing the 2012 meeting; see it at: http://modelingthesp.blogspot.com/2012/10/sp-society-convention-2012.html .) It’s a stair-stepped set of display tracks, about 16 feet long, and containing 11 tracks. At table height, it is indeed an imposing sight. I had been asked to bring a train for one of these tracks, namely a reefer train with traditional 2-10-2 power (fitting the conference theme this year, “Decks over Cuesta”) that would fill a track.
This turned out to require 25 reefers, along with the Westside model of a Class F-5 locomotive and a brass caboose. It was tough to photograph the entire thing, but here is the head end. The train is the fifth track up from the bottom. 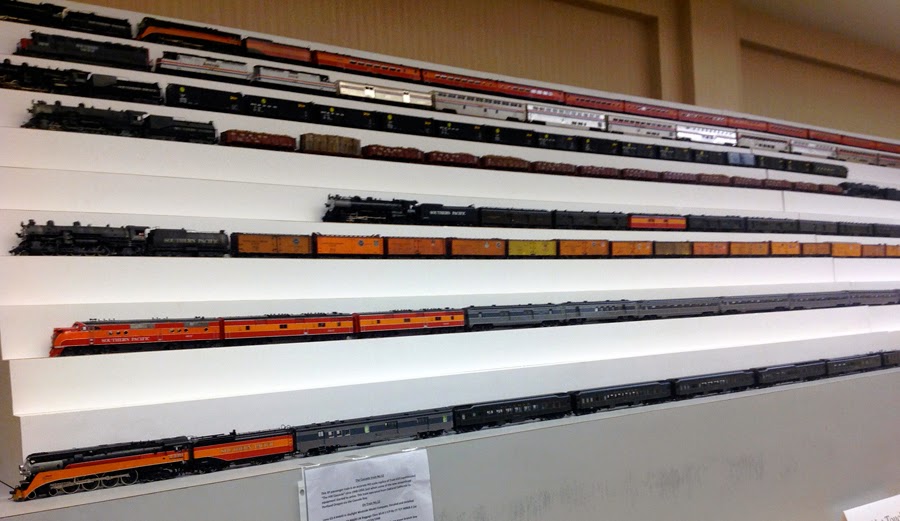 The rest of the consist can be seen below, showing all 25 reefers but not quite reaching the locomotive. I inserted five foreign reefers into this train, in accord with the fact that PFE used that many foreigns in peak harvest season. I chose an ART, a BAR, an FGE, an MDT, and a URTX Milwaukee car. See if you can spot them in the train (you can click on the image to enlarge.)

Three tracks above my reefer train is Andrew Merriam’s very nice beet train, with all gondolas depicted before the days when side extensions were added (that’s my era too).
The contest room in which the “Wall of Trains” was displayed was also where quite a few fine models were exhibited in the contest. Because of the conference theme about Decks, there was a special contest category for such engines, and a whole bunch of fine locomotives was on display, including the diorama at right.

As part of the “display only” part of the contest room, Dick Harley showed a number of his in-progress PFE models, to accompany the talk he gave on modeling the PFE wood-sheathed ice reefers. It was interesting to see the models in this form, and they perfectly complemented his presentation. Note the Microscale decal sheet shown — Dick did the artwork for the recent re-issue of Microscale set 501 (both 87-501 and 60-501).

There is also a traditional contest category at SPH&TS meetings, the “What If” category, in which we have had everything from cab-forwards with F-unit fronts, to AC4400 locomotives in Black Widow paint, to Alco PA engines in Two-Tone Gray paint. This year the winning entry was Jim Elliott’s diorama of what would have happened if PMT had continued into the container era. In this intermodal terminal, we see both containers and trailers in Daylight colors, and even the stack cars are so painted. It was a popular winner.

It was a fine meeting, most enjoyable for me and I think most others. I just wish all the cities to which we go with our convention were as pleasant and interesting as San Luis Obispo.
Tony Thompson
Posted by Tony Thompson at 11:05 AM