Last year a neighbor came over and wanted to see the layout. I was happy to show it, and while he was here, he used his iPhone to take about seven minutes of video, intending to show it to his dad, who is interested in model railroading. In the process, he was asking about things like DCC and sound in locomotives, so in a sense much of the conversation was about explaining fairly basic things, from the perspective of experienced model railroaders. Toward the end, you’ll hear my wife Mary joining the conversation. At that point, we were standing near the Shumala depot, which you see in this view. 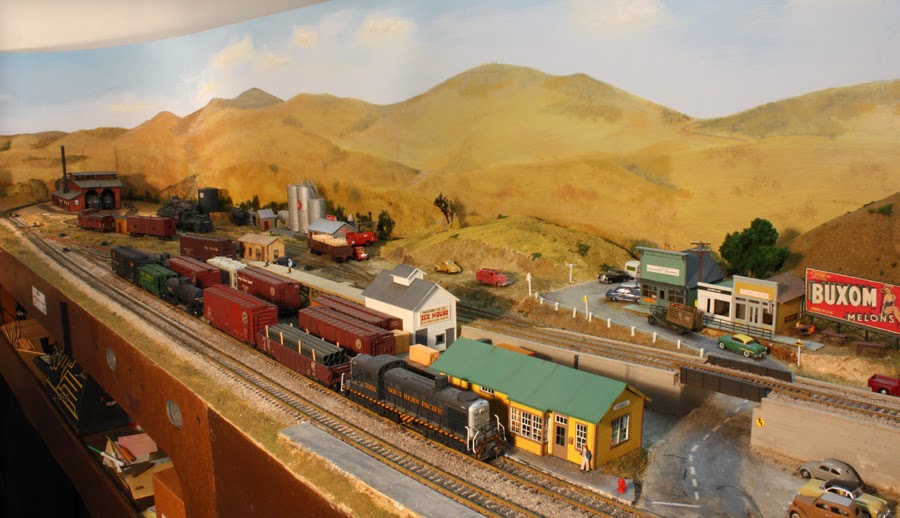 Understandably, the video is erratic in spots, just being a “walk around,” and the conversation was entirely unscripted and undirected. But my visitor did take a turn around the layout as it was in March of 2014, and you do get views of the entire layout in different parts of the video. I’m not exactly apologizing for the video, only trying to emphasize that it is only a limited representation of how I want the layout to be viewed. But it’s here, and in the absence of better video, it will do for now.
Here is the link to the video on YouTube:

Awhile back, I posted (see: http://modelingthesp.blogspot.com/2014/02/my-layout-description.html ) a fuller layout description. That may be of interest to some viewers of the video.
I would like to shoot and edit something more indicative of how the layout is operated, and have already experimented a little, but in the meantime this video provides a bit of a look at the layout as it was at that time. I hope you enjoy it.
Tony Thompson
Posted by Tony Thompson at 9:47 AM