I have had a number of questions about the layout video recently posted, in particular trying to understand what the track arrangement is. Making the video, we had intended to show how the staging table connects to the other side of the peninsula, but failed to include that. (The video can be accessed by this link: http://modelingthesp.blogspot.com/2015/02/a-preliminary-layout-video.html .)
So here is the key point: the Southern Pacific main line is simply a loop. On one side of the peninsula, it passes the town of Shumala, which is also the junction with the Santa Rosalia Branch. On the other side, it passes through the staging table, and is underneath the town of Ballard. To show it as simply as possible, here is a sketch of just the SP main.

The two points at which the track disappears from view on the Shumala side of the layout are indicated by “tunnel portal” symbols, though only one of them is actually a tunnel.
The second part of the layout is the branch itself. It departs from Shumala, climbing up behind the ice deck, crossing the bridge over Chamisal Road, to a tunnel portal just visible on edge in this photo: 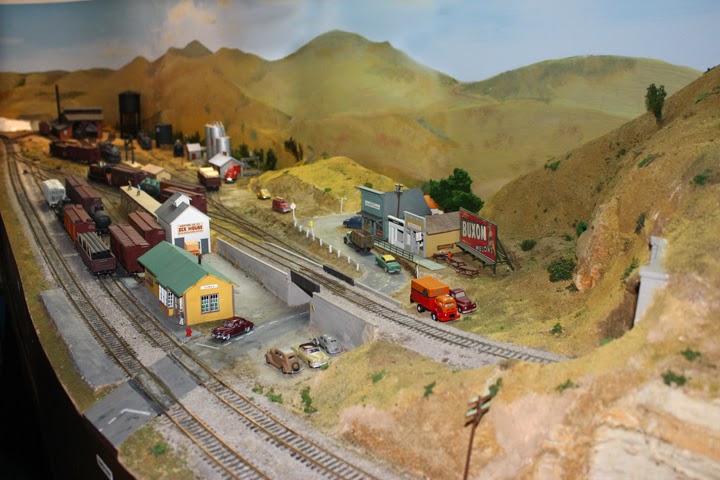 It passes through this tunnel, around the end of the peninsula, and emerges at Ballard, as you see in this photo repeated from my series on repairing the Ballard hill:

The track then continues through Ballard to the end of the branch at Santa Rosalia. Ballard is of course immediately above the staging table shown in the sketch at the top of this post. See, for example, my post from a few years ago, about my son and I putting the Ballard track board in place above the staging: http://modelingthesp.blogspot.com/2011/09/ballard-2.html .
The branch, then, is point-to-point, and has no turning facilities along it. At Shumala, however, there is a turntable with the roundhouse. The SP main line likewise has no turning capability, and trains must be staged in the desired orientation to run. This was anticipated in the layout planning, and re-railers were added to every staging track to facilitate rearrangement of trains, albeit by the good old 0-5-0 method.
Hopefully this clarifies the layout track arrangement, really quite a simple setup, until such time as I actually draw a track plan.
Tony Thompson
Posted by Tony Thompson at 10:39 AM