In my initial post about this subject, I mentioned the locale and significance of Pismo Dunes Road for my layout extension at East Shumala (that post is at: http://modelingthesp.blogspot.com/2014/12/pismo-dunes-road-east-shumala.html ), and I followed that up by showing the installation of the styrene road (at: http://modelingthesp.blogspot.com/2015/01/pismo-dunes-road-part-2.html ). The problem presented at the end of that second post was the orientation of the intersecting Alder Street, which in simplest form headed straight into the backdrop. I wanted to do something about that, to minimize the problem of disguising where the road goes. This post is about trying out several ideas to do that.
The street heads off between two buildings, but both are flats, so a direct line into the backdrop offers few means of disguise.  But if the road is curving as it passes between the buildings, its continuation beyond the layout would be partly or entirely hidden by one of the buildings, so this could help solve the backdrop-impact problem. I also wanted to try tapering the roadway somewhat, to see if I could force some perspective to the scene.
The simplest way to try these ideas is to cut out some trial roadway shapes in paper. I just used a sheet of newsprint. My first try was to taper the width of the roadway, to try forcing perspective. Slight narrowing did not seem to do much, so I tried a greater taper (see below). This looks okay with nothing around it. But with this short distance to the backdrop, this would not look right with HO objects of familiar size nearby. The freight cars on these tracks will be full-size HO, so the strongly forced perspective will not look right when such cars are present, nor will HO highway vehicles. In this photo, the paper cutout is simply atop the original roadway. 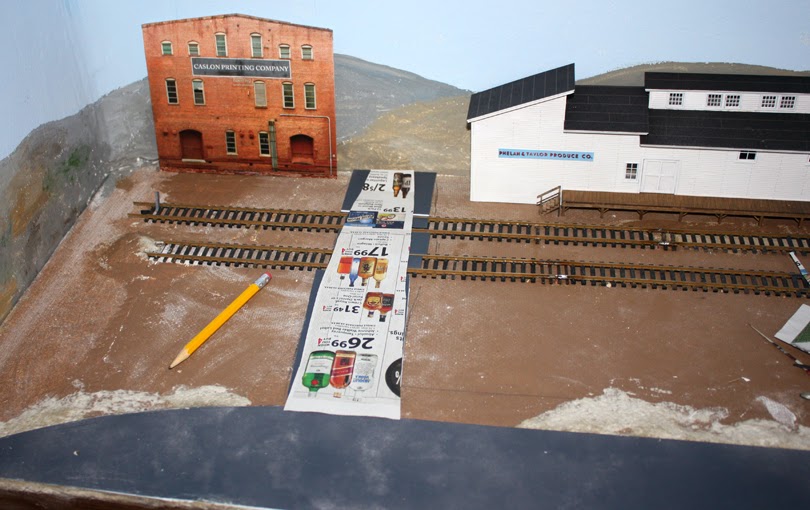 My next idea was to curve the roadway slightly, while also tapering it a little. Below is my trial cut-out of this paper roadway. Again, there isn’t much space to work a curve into the road, and the taper is probably excessive, for the reasons just given. 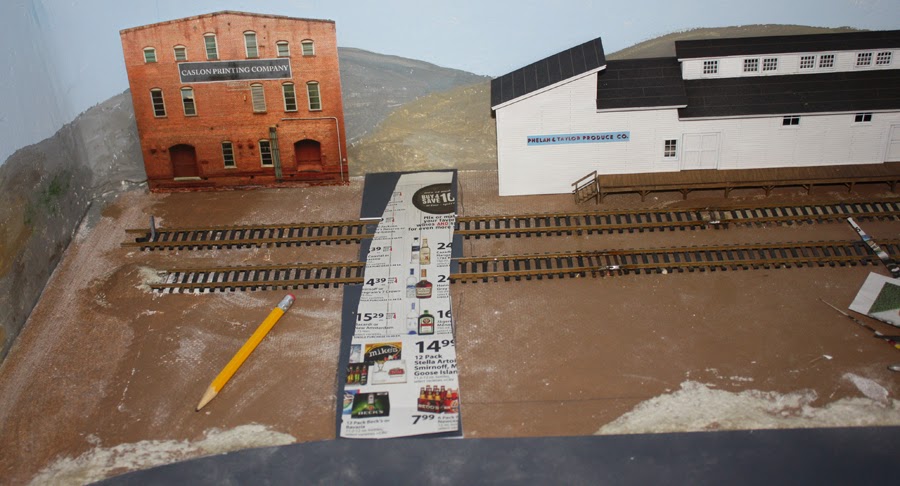 But the curve looks promising, because a tree or shrub could be placed on either side of an arrangement like this, to help obscure whether the distant roadway is visible. It is maybe just a little too tapered. So I cut out still another piece, not quite as curved nor tapered much. 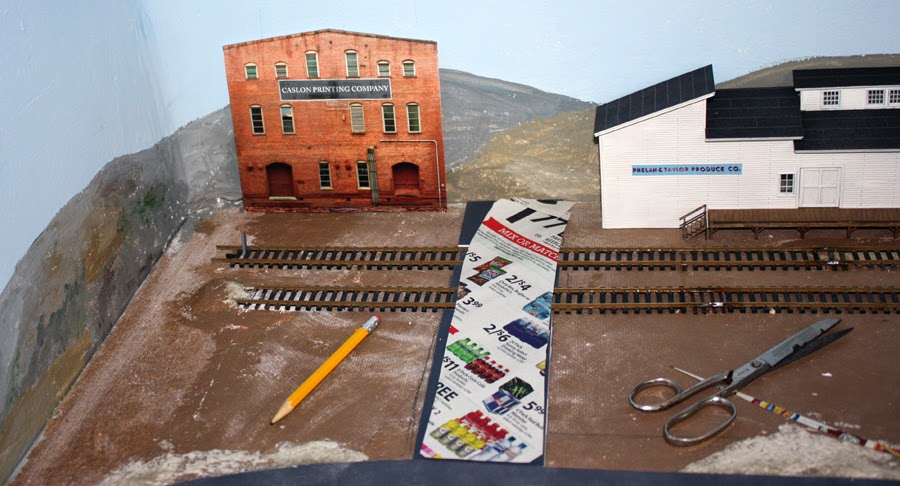 But I was disappointed with this, as it seemed to me that it didn’t actually help too much to solve the problem of hiding where the road goes, even if it was the best of the modifications.
At this point I had the idea that what is really needed is to prevent the viewer from seeing the intersection of the horizontal road with the vertical wall of the room. Maybe I could pose a truck or automobile at either of the two backdrop industries, or show an automobile pulling out from one of them.

This is just a van truck to illustrate the idea. A smaller truck might look a little better, and I will pursue that further.

But I do need to install a road here, so I decided to use that most recent design, a modest taper and some curvature to the right. I simply trimmed each styrene roadway piece that you see above, then glued them down with canopy glue. I will show further progress on Alder Street in a future post.
There is nothing of great significance in this series of trials, except that it shows the ways you sometimes have to try a range of ideas to select what works. That is certainly true for me in designing and building scenery. A true artist could envision all this in his or her mind, but whether it’s my engineering genes or something else, I have learned I can’t do that very effectively. I have to try something physical I can see and touch. More next time.
Tony Thompson
Posted by Tony Thompson at 10:20 AM