Around three years ago, I posted a discussion about route cards, and about the “routing card boards” on which they were supposed to be fastened, on freight cars (those comments began with the post at the following link: http://modelingthesp.blogspot.com/2011/11/chalk-marks-and-route-cards.html ). A second post showed examples of prototype route cards themselves (at: http://modelingthesp.blogspot.com/2011/11/route-cards-2.html ), and so did the eighth post in the series (you can read it at: http://modelingthesp.blogspot.com/2013/12/route-cards-8.html ). Post 2 was followed by several descriptions of how I have modeled these cards. Finally, I showed the prototype AAR rules for these boards, and a prototype drawing of the recommended size and shape (see this latter post on the prototype at: http://modelingthesp.blogspot.com/2012/01/route-cards-7.html ).
You can readily find those posts (and more) by using the search box in the upper right corner of the blog page, and using the term Route Cards; there have been altogether eight of them. (You will also turn up several other posts in which route cards are alluded to, but I mean the ones titled like the present post.)
One thing often noted in photos of older wood-sheathed cars, is that car clerks obviously placed route cards or switching cards wherever it seemed convenient to them. Usually low on the car, so other switchmen on the ground could read them, and often placed near the left bolster, or just left of the car door. In the ’teens and 1920s, many car owners painted a black rectangle in one of these areas, and added a legend such as “tack cards here,” though clerks evidently took such notations as a challenge to their independence, and tended to place the cards anywhere but on the black rectangle.
For flat cars and tank cars, there was far less scope to place route cards. On tank cars, they were often tacked to the edge of the wood running board. You can see that near both ends of GATX 66674, in an undated photograph at Milwaukee (Richard Hendrickson collection): 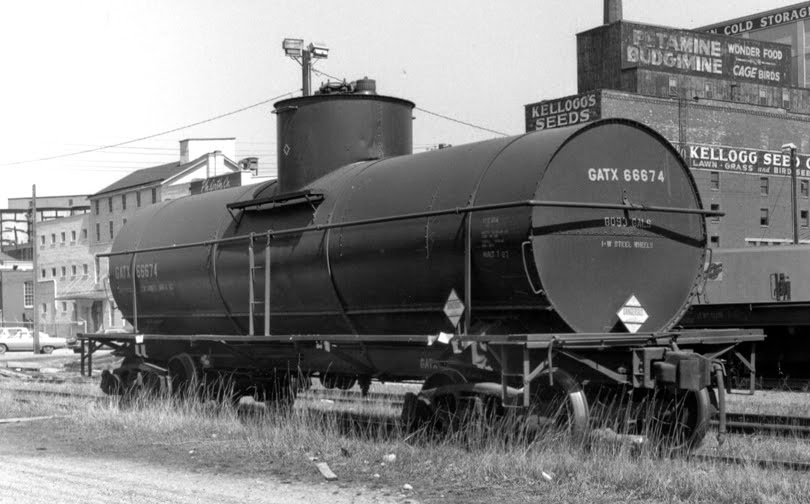 Newer tank cars might have an actual routing card board on the side sill near one of the bolsters.
For flat cars there might be a routing card board attached somewhere, especially on newer steel cars, but older cars had no such board, and clerks had to tack to the edge of the wooden deck. This Depression-era image shows a card tacked to the wooden blocking under the deck edge, in a Library of Congress photo taken at Sacramento. 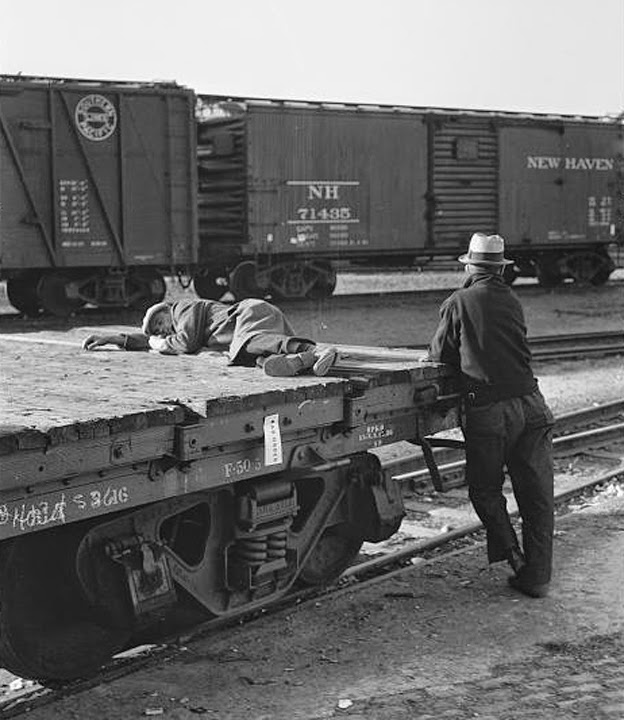 Note that the switching card is oblong and appears pre-printed, so that a clerk could simply circle or check off the appropriate destination symbol or code. This is an SP Class F-50-5 “Harriman” flat car with overhanging deck, and typical Vulcan trucks of that period.
These locations for route cards are readily modeled. I cut small squares or rectangles of paper (no need to write on them) and attach with canopy glue. These are indeed very small details, but their light colors make them really stand out on the side of a freight car (equally true in model form, as it is in prototype photos). And they do add an additional touch of detail that you can enjoy.
Tony Thompson
Posted by Tony Thompson at 4:56 PM