In an earlier post (at: http://modelingthesp.blogspot.com/2013/02/layout-fascia-my-approach.html ) I described the kind of layout fascia I choose to use, and a little about why. My fascia is all tempered Masonite, attached with screws to the layout structure, and finished with shellac to retain the natural color and look of the Masonite. Shellac is a pretty old-fashioned finish, but for me it has just the right satin gloss finish, does seal the surface, and also seems to resist scratching well.
In the present post, I show extensions of the fascia to complete the edges of the Ballard part of the layout. This track board, like the entire layout, originally had a full fascia when the layout was assembled in my home in Pittsburgh, but all fascia was removed (and saved) when the layout was transported. The original fascia sections for Ballard couldn’t be re-applied, however, because there is now a staging table under that part of the layout, which there had not been in the Pittsburgh version. Here is the right-most end of Ballard. Fascia extends partway along from the left. In the distance you can see an aluminum strip on the fascia. (You can click to enlarge.)

A closer-up view (below) shows the area at the far right of the photo above, with the Union Oil bulk dealer just above the aluminum piece. Just to the right of the aluminum is the emerging bed of Oso Flaco Creek; for more on that, see this link: http://modelingthesp.blogspot.com/2015/01/modeling-oso-flaco-creek.html . The creek project is ongoing.

The aluminum strip you can see here is actually one leg of an angle, which attaches an extension piece of plywood to my Ballard track board. I described this earlier, at:  http://modelingthesp.blogspot.com/2011/09/ballard-1.html , in explaining how the Ballard track board was built.
If I were applying the fascia as it was done everywhere else on the layout, I would simply put screws through the Masonite into the edge of the plywood track board, but obviously in the area of the aluminum, it won’t be quite that simple. My decision was to simply drill clearance holes in the aluminum, permitting the usual flat-head wood screws to pass through the aluminum and into the plywood.
New fascia strips were cut from some of the saved, shellacked Masonite. Some already had countersunk screw holes in them, so I took advantage of that. Here is the installed pair of new fascia strips.

The area where the creek reaches the fascia was cut down to match the scenic contour, as I have done elsewhere on the layout. You can see this below.

The ground throw at photo center is an interesting story (it throws a switch some ways back into Ballard), and I will describe it in a future post.
After the fascia pieces are set, I paint the screw heads and any scrapes with acrylic paint, mixed from the tube to match the particular Masonite sheet. Usually what I use is Raw Umber, a medium brown, mixed with varying amounts of Raw Sienna, a yellow/ochre color. Different proportions of the two can nicely match most of the natural range of Masonite colors.
There was a bit of a gap between these Masonite strips and the existing layout edge. My usual procedure was followed, which is to fill the gap with Sculptamold and when dry, gently sand the surface to level it. 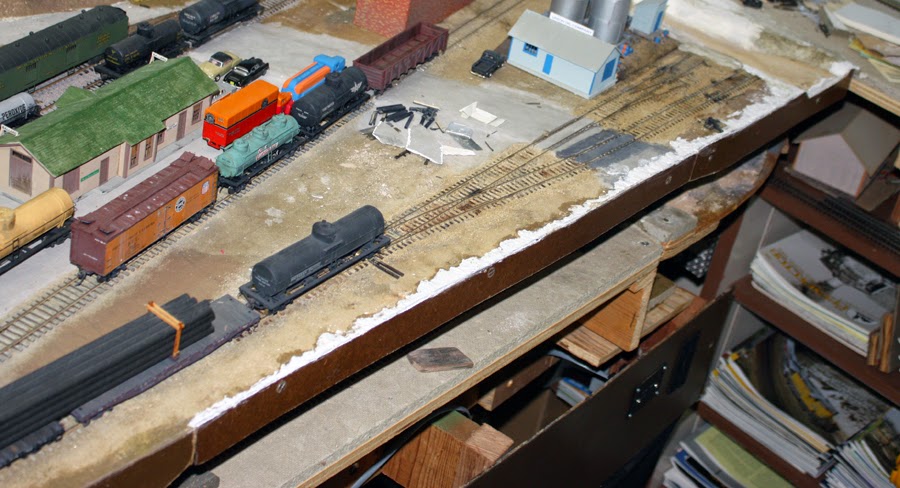 The next step is to paint this filler “dirt brown” (I continue to like the Rust-Oleum acrylic color “Nutmeg” for this). The creek banks are also painted, as you see at right in the photo below.

This paint provides a good undercoat for surface textures of dirt, grass, and small vegetation. That will allow the fully-scenicked layout surface to come out to the edge of the fascia itself. It’s a straightforward process that needn’t be shown here, but completion of this area of the layout will be treated in a future post.
Tony Thompson
Posted by Tony Thompson at 9:48 AM

Email ThisBlogThis!Share to TwitterShare to FacebookShare to Pinterest
Labels: My layout, Standards