Last year, I presented three blog posts about photographing railroad models. I showed (in the post identified as Part 3) how I do what is called “table-top photography,” using a very simple set-up for individual models, and I suggested several items of reading material, for those who like background or additional inspiration. Here are the links:

I mentioned at the time that I would like to extend the series, with suggestions about a more challenging problem, that of photographing model railroad layouts, but have only now gotten around to finishing that description.
In the first of those earlier posts, I emphasized the three problems you have to learn to solve if you are going to make successful photographs of models: depth of field so everything is in focus, even though you are close to the subject; adequate light to keep exposure times reasonably short; and adequate support for the camera if exposure times are not short. The first problem is solved with small camera aperture, that is, large f-stop number; the third is usually solved with a tripod. For more discussion of these points, the first post cited above is the place to look.
I emphasized in Part 3, in describing table-top photography, that a tripod or other secure support for the camera is often not needed, particularly if sunlight is available (sunlight is really a lot of light for a camera). But for layout photography, a tripod or equivalent is simply a necessity. You are indoors, so light levels can be a challenge, and that means longer exposures.
The simplest layout situation is a photograph of a limited extent of the overall scene. It requires a tripod or comparable camera support, but a single light can work. In the photo below, I am using a 500-watt photoflood, handheld, for the photo I’m taking. The advantage of the handheld light is that it is easy to move around and optimize where shadows fall. Many of my layout photos which show limited areas were taken just this way. 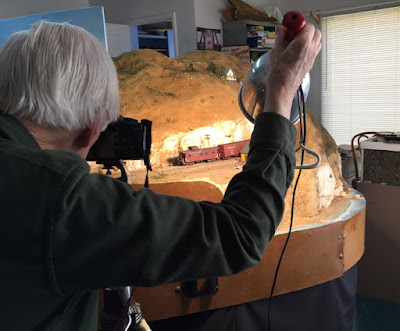 I should emphasize that the conventional tripod may not always be the best approach. You can use a beanbag or similar object for the camera to rest on; there are good monopods available; and you can also use something like a Joby “GorillaPod” (you can see their products at: https://joby.com/ ). Since I mention it, here is one in use: 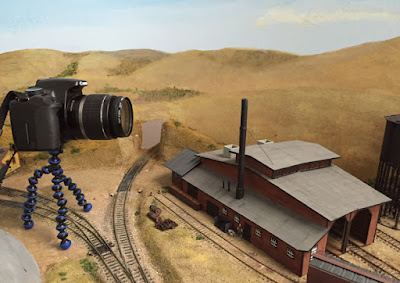 Actually, a full-size SLR on this small Joby is a little unsteady, as you can guess from looking at it, but a small point-and-shoot camera can work well here. (There are also bigger Jobys.) I show this mainly to point out that there are alternatives to a standard tripod. But for many purposes, the tripod is your workhorse. I’ve shown my old Davidson tripod in several photos, and here is my newer, more versatile and more capable tripod, a ProMaster “featherweight” FW20T. (See their line at: http://promaster.com/ ). Both my tripods are useful in different ways and have their place. 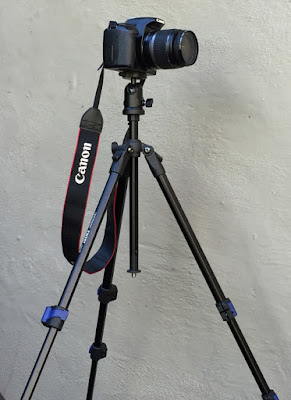 Whenever using a tripod, whether or not the lights are  handheld, the risk of camera movement or vibration during exposure can be minimized with a remote shutter release. Back in the day, these were mechanical (cable) releases, but today they are electronic devices that plug into the camera. On my Canon XSi, this is called a remote switch (Canon part RS-60E3). It plugs in next to the download cable socket. Here I am using the remote switch shutter release: 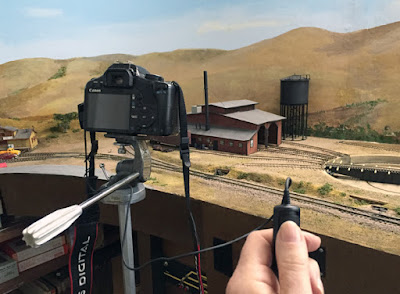 A more subtle problem is that you are often photographing an area of some size, compared to, say, an individual box car. This leads to the problem of light uniformity, that is, to get reasonably uniform light over the whole area to be photographed. This is a lot tougher than it may sound. Our human eyes have a remarkable range of light-level capability, and in addition, our brains are able to interpret these light levels to deliver a good image to our perception. Thus even with somewhat shaded or varying light levels, we normally perceive an “okay” light uniformity. But the camera, whether film or digital, does not see it that way. A few poor photo results are perhaps inevitable, but can be important training on this point. We have to learn to notice even modest difference in light level in the area we want to photograph, and take steps to correct those differences.
To show a strong example of the problem, I have set up a shot along the length of my layout town of Shumala, about 13 feet long as I have set it up. No local or handheld light can possibly illuminate all this. Instead, I use a big main light, ordinarily a 1000-watt flood, for the farthest-away segment, and a 500-watt fill to give best lighting at the near end, which the photo will emphasize. The photo below was taken from behind the tripod, and you can see the length challenge. 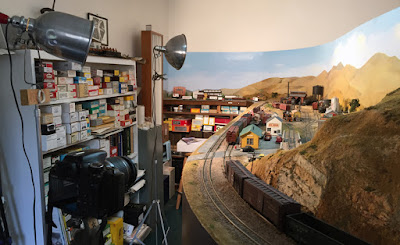 To better recognize how well the main light and fill are illuminating the entire length of layout in this case, I stepped a little left to take the photo below, a bit off-angle from the planned shot, so you can see the light uniformity all the way down. Positioning of these lights is the result of experimenting with placement of each light. Both lights are on lightweight stands, all right for occasional use. 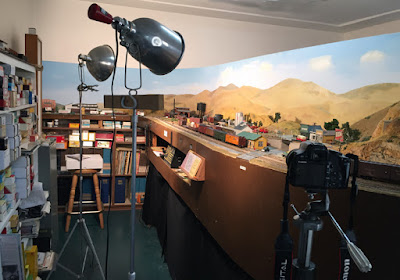 These two photos, incidentally, were taken with my iPhone.
In this post, I have offered several specific ways to approach the challenge of layout photography. These are just suggestions, and anyone not already familiar with these problems should plan on experimenting and, inevitably, making mistakes. It’s called learning by experience. At least today, with immediate digital images, one can move through the learning process faster than when a person had to wait a week or more to get back that box of slides.
And speaking more generally, anyone with an interest in any of the kinds of model photography I’ve described in this series of posts should jump in with both feet and try it, if you haven’t already. And if you have tried it and were disappointed, I would suggest keeping at it. I have learned from myriad mistakes of my own, and I think anyone can do so.
Tony Thompson
Posted by Tony Thompson at 10:24 AM

Email ThisBlogThis!Share to TwitterShare to FacebookShare to Pinterest
Labels: My layout, Photography