My first discussion of trucks and how they are sprung, included description of some ways in which snubbing by friction was introduced into freight car trucks (see it at: http://modelingthesp.blogspot.com/2016/04/trucks-truck-springs-and-snubbers.html ). The spring-substitute snubbers shown in that previous post were not the only early approach to adding some frictional energy absorption to trucks.
Another method, recognized quite early, was to accomplish some of the springing with leaf springs (usually called elliptical springs, as opposed to helical or coil springs, based on their shape). A leaf spring package is readily introduced into a truck sideframe, and in fact this had been done as early as the turn of the 20th century, for caboose trucks. At the time, arch-bar trucks were superseding older caboose trucks derived from passenger designs, that had longer wheelbases and wooden truck beams.
Progressive railroads were beginning to adopt cast-steel sideframes for trucks, and below is a single example, from a 1913 Southern Pacific caboose, with an early-style Andrews truck. It has an L-section sideframe and a long bottom tie-bar, in contrast to the familiar USRA-era Andrews truck with two short horizontal tie bars. (Detail from an SP photo of caboose Class CA.) 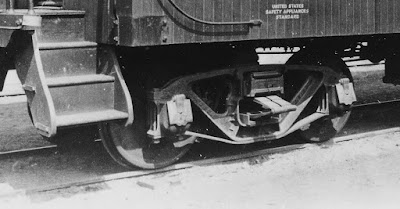 When compressed and released, an elliptical spring experiences relative motion between each adjoining leaf in the spring. That motion occurs with considerable friction, and thus accomplishes a kind of snubbing.
A wide variety of caboose trucks (and sometimes freight car trucks) were built with leaf springs only. The Bob Karig photo below shows an example, in a Delaware & Lackawanna Western truck. This Gould truck with relatively modern double-truss cast-steel sideframes was produced in 1948. 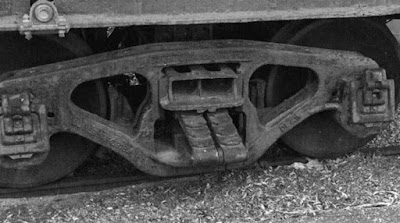 Freight car trucks were first modified with added elliptical springs in the early 1920s, simply substituting them for a pair of helical springs. An example below is a Pennsylvania 2D-F8 truck arranged that way. This truck is easily recognized by the “bulged” portion of the sideframe under the spring opening. (This truck is an outgrowth of the ARA “Type Y” truck, adopted a year earlier as Recommended Practice, though the two are not identical.)

A 70-ton truck, usually with three spring pairs visible at the sideframe, could receive the elliptical spring set in the sideframe center, as seen below. Near the right end of the truck, the characters “6 x 11” are cast onto the frame, indicating 6 x 11-inch journals, the standard size for 70-ton nominal capacity. Note that you can see all the way through the hollow bolster. (You can click to enlarge.) Both this and the preceding photo are from the Richard Hendrickson collection.

An even more ambitious attempt to incorporate a major role for elliptical springs in a freight truck was the Simplex truck of the mid 1930s. One is shown below. Among the buyers which tried out this truck (and kept it in service for a number of years) was Pacific Fruit Express, whose photo this is. 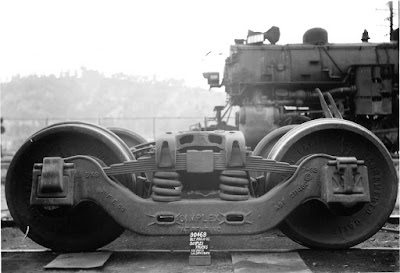 Obviously both coil and leaf springs were cushioning the bolster here. This truck was never widely used. Reports were that although it did ride very smoothly and performed well at high speeds, it was significantly more expensive.
But even as these kinds of elliptical spring snubbing systems were developed, along with the frictional-wedge kind described in the Part 1 post in this series, more compact and simpler ways to provide frictional snubbing were also being developed. I will return to those in a future post.
I will also include here, for those interested in even more information about these matters, a couple of very complete and authoritative references on freight car trucks.

There are adequate model versions available commercially of a couple of different truck designs with elliptical spring groups substituted for a helical spring pair. It is also quite possible to “truck bash” one for yourself, using one of the many express or passenger trucks with leaf springs: just cut off the leaf spring protrusion and and glue it in place over a coil on your coil-spring truck. But rather than discuss model trucks here, I would instead recommend the excellent illustrated description of HO scale trucks provided in Richard Hendrickson’s article, available at Google Drive from this link: http://modelingthesp.blogspot.com/2013/07/another-update-to-richard-hendricksons.html .
Tony Thompson
Posted by Tony Thompson at 7:54 AM