Today’s date being what it is, I can’t resist mentioning a previous post on this date, which recognized a short, timely article Richard Hendrickson and I wrote for Railroad Model Craftsman. If you’re interested, or don’t remember it, you can see it at: http://modelingthesp.blogspot.com/2015/04/getting-down-to-basics.html .
Turning to the topic of today’s title, I have often thought about the problem of making windows for structures which are to some extent in the background, that is, some ways back from the layout edge. These need not be excellent windows, as they will not be viewed at all closely by visitors or operating crews. Among the structures which have a need for windows like this is the Receiving building at Jupiter Pump & Compressor (formerly part of the plant foundry), a Suydam kit which I showed in my first post about JP&C (at: http://modelingthesp.blogspot.com/2015/09/jupiter-pump-and-compressor.html ). Once weathered, the structure looked much better, but the lack of windows was rather glaring. 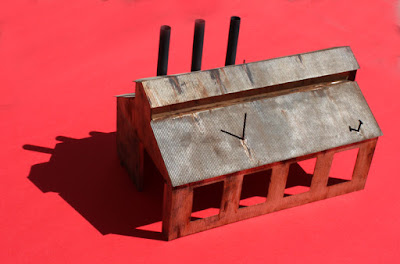 My thinking process had led me to the conclusion that I could make windows in the following way. I used the Line Tool in Photoshop to draw window frames and mullions of varying widths, then duplicated each window so that the file would contain plenty of spares when printed. Once I was satisfied with the design, I printed out copies on overhead transparency sheets. Though overhead projector technology for lectures is at best obsolescent, many copy shops and stationery stores still have stocks of transparencies, and I had no trouble obtaining blank ones. The image below shows how the sheet of windows looked (windows for other buildings are also included). These are intended to mimic industrial steel-framed windows, though they could work for other window types. 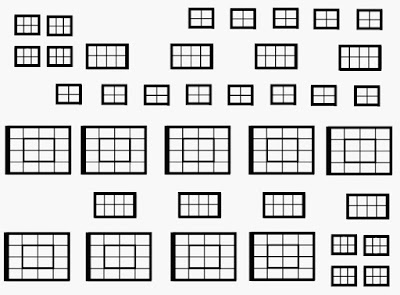 I’m confident I am not the first person to think of this method, but I don’t specifically know of prior publication of it. (No doubt I will hear from those who do know of priors, no worries.) And there may be those in the younger generation who aren’t clear on what an overhead projector is, and if so, there is a clear Wikipedia entry describing it (see: https://en.wikipedia.org/wiki/Overhead_projector  ).
Incidentally, if the Photoshop file of your window drawings is in RGB mode, you can readily color the frames to suit the building in which you intend to install them. The ones for this model are black. I should also mention that the side of the transparency on which the copy machine has printed the toner leaves a slightly flat ink surface, so this avoids the frame being as glossy as the “glass” if you carefully install the printed side outward.
If you leave plentiful space between the windows, as you see in the file above, you can just cut them out with scissors and mount inside the wall with your preferred brand of tape. You can also use canopy glue, which I like because it won’t attack or cloud the clear plastic window, dries clear and glossy (like the window), and remains flexible to accommodate expansion and contraction. I use it all the time for gluing dissimilar materials. (If this adhesive is unfamiliar, you may wish to read a fuller description of it, in my blog post at: http://modelingthesp.blogspot.com/2013/05/a-few-words-in-praise-of-canopy-glue.html .)
Shown below is one of the windows installed in my Suydam building, in this case attached with canopy glue. (I later tried attaching a window with Scotch library tape for comparison, which worked okay, but I think I will stick to canopy glue in future.) 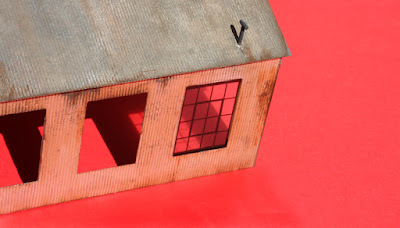 Another nice appearance detail you can easily do with windows like these is to tilt the center portion away from the plane of the window, which is what many steel industrial windows like this were designed to do. I simply cut out the center section, then glued a thin wire (I used 0.010-inch diameter on this window) across the opening, then glued the cut-out center section to the wire, at the desired angle. The adjoining three windows are closed. 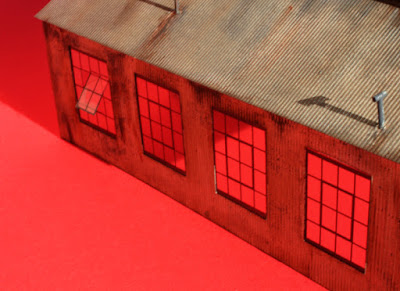 I’m pleased with the ease of this technique, and feel that, at the layout distance of the structures on which I am using it, it presents no compromise with appearance. I recommend it if you have any background buildings which need windows, especially if they are industrial buildings.
Tony Thompson
Posted by Tony Thompson at 9:57 AM