In the previous post, I showed the Tru-Scale kit for a Quonset hut structure and my beginnings of modification to it. (You can read it at this link: http://modelingthesp.blogspot.com/2016/03/building-quonset-hut-machine-shop.html .) I have cut down the kit from its original 40 x 80 scale feet to a size that fits my layout space, 40 x 48 feet; the original Quonsets were essentially modular at the four-foot spacing of their ribs.
[For those interested in the history and design of the Quonset hut, especially its usage during World War II, I highly recommend a presentation by J. David Rogers (a professor at Missouri University of Science and Technology at Rolla), which can be found at: http://web.mst.edu/~rogersda/umrcourses/ge342/quonset_huts-revised.pdf ].
With all re-assembly and correction of damage to the cut-down Tru-Scale structure, and painted a medium gray (most Quonsets were painted), my model looked like this. Note I have cut a “man door” into the sliding door at this end, using a Grandt Line door. 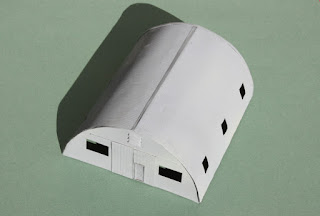 The next issue is windows. The original kit provided a strip of plain, clear plastic, with the advice to use a pen and ruler to draw mullions thereon. I wanted to do a little better than that.
Original Quonset huts were manufactured both with and without windows (the latter being suitable for warehouse and similar uses). Several different kinds of window treatments can be seen even in original huts, and of course in postwar use, many civilian owners modified windows to suit themselves. Although a common window arrangement was effectively “flush” with the walls, a wide range of other treatments was applied. For example, dormers were made for the windows on some huts, as can be seen in this photo. (The photo shows a hut at Camp Hastings, Gretna, PA, and is from Rogers’ presentation, cited above; used with permission.)

The Tru-Scale kit is intended to have windows that are “flush” with the walls. As I said, this was a common arrangement in original Quonsets. The photo below shows a Quonset kept in use for storage at Louisiana State University, with this kind of window. These are steel-framed windows. (The photo is from Rogers’ presentation.) 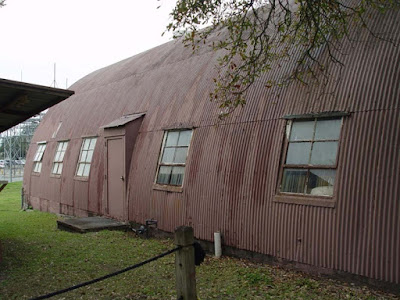 Since this structure will be located some ways from the viewer at the edge of the layout,  I decided to do windows with my method using overhead transparency sheets (this has been described in some detail in a prior post at this link: http://modelingthesp.blogspot.com/2016/04/easy-windows-for-background-structures.html ). Here is how the sheet of windows looked (windows for other buildings are also included): 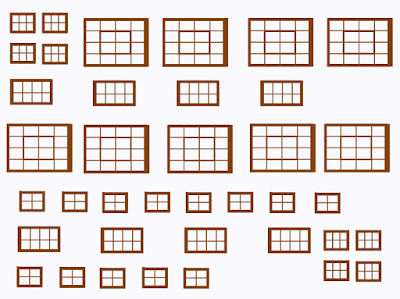 Incidentally, if the Photoshop file is in RGB mode, you can readily color the frames to suit the building in which you intend to install them. You can see that I made brown ones for this model.
When cut out oversize, these were readily glued to the inside surface of the building with canopy glue. This adhesive does not attack plastics, thus did no damage to the windows, dries clear, and remains flexible to accommodate expansion and contraction. I use it all the time for attaching dissimilar materials (If this adhesive is unfamiliar, you may wish to read a fuller description at: http://modelingthesp.blogspot.com/2013/05/a-few-words-in-praise-of-canopy-glue.html .)
Once the windows were installed, I had to decide what to install for ventilators. The rooftop ventilators in the Tru-Scale kit did not appeal to me, as I found them a little odd in proportion. Instead, I dug into my parts stash and found a bag of Suydam ventilators, part no. S114, and used two of them.
Here is a view of the completed structure. I printed out the simple sign on paper for each end.You can click to enlarge. 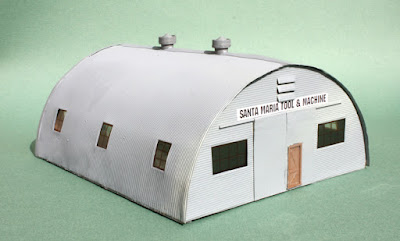 This industry will need a loading dock for rail service also, but since that will have to be fitted to the exact track alignment alongside the building, it will be done later.
It was fun figuring out how to use, and to modify, this classic HO scale kit, and I look forward to having this period-appropriate Quonset hut housing an industry on my layout.
Tony Thompson
Posted by Tony Thompson at 4:41 PM