I am definitely among those who don’t find layout wiring to be their favorite part of the hobby. But it is, of course, utterly essential. So I cope with it, perhaps revealing my lack of enthusiasm in this series of posts entitled “electrical wars” (you can find the preceding posts in the series — and related posts — by using the search box to the right of this text, and entering "electrical wars" as your search term).
A tool which I really created as a kind of obligation for completeness, but which has proven even more valuable that I ever imagined, is my Layout Notebook. It includes benchwork basics, some scenery procedures, planning ideas, and even thoughts about structures, but the core of its usefulness is the electrical sections. I said a little about it in a prior post (which is at: http://modelingthesp.blogspot.com/2012/08/a-modeling-journal.html ), though that post was mostly about the successor Modeling Journal, for everything other than the layout wiring.
The present post is occasioned by my cutover from plug-in DCC throttles, the previous arrangement, to radio throttles (as I described previously, in this post: http://modelingthesp.blogspot.com/2016/03/changing-throttle-connections.html ). Let me quickly say that the change from plug-in to radio throttles was, in and of itself, very quick and easy. The NCE technology works smoothly for this changeover. The only “electrical war” part of the project was re-examining all my layout feeders, to make sure I had two distinct and separate geographical districts in the new arrangement, specifically that all power connections to the outer end of my mythical SP branch line (the towns of Ballard and Santa Rosalia) were separated from those to the rest of the layout.
Two districts aren’t vital to radio throttles, just something that I decided to implement. So this post is about my use of the Layout Notebook for information, not about any difficulty with the change to radio. But though I trust the Notebook, I hate to assume anything I could check, so I climbed under the layout in several places to examine the various feeders and terminal strips with a fresh eye. (Of course, there is plenty of “stuff” stored under the layout, so various parts of the “stuff” had to be pulled out to permit access, then put back into place.) Here is a photo from underneath the east end of Ballard: 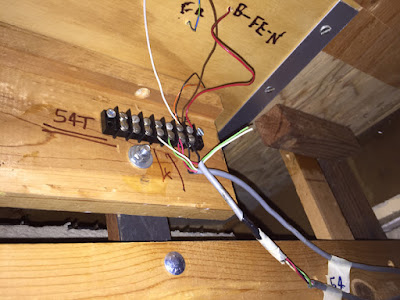 You can see in this photo the feeder B-FE-N (it looks double, but the second image is the shadow of the wire), terminal strip 54T (so named because it is the “starting point” for Cable 54, which you see at lower right), and another cable connection, plus wires feeding other terminal strips. This was a good thing to see, because Cable 54 brings the DCC power from the command station to 54T and the cable below it, 53B, connects to all other Ballard feeders (the green and white wires in both cables are unused at this point). That meant that all Ballard and Santa Rosalia feeders were already separated from the rest of the layout, and could readily be connected as a separate district.
Incidentally, I wanted to mention something I have been doing for some time, but it seems many haven’t thought of it. I use a headlamp when working on wiring under the layout. I had an old one from my backpacking days, and with fresh batteries, it was good to go. These devices, of course, are excellent at putting a beam of light right where you’re looking. I do use a conventional hanging “trouble light” also, but moving it around all the time can get inconvenient. Especially when just checking connections at terminal strips, as I was doing for the project described in this post, the headlamp was excellent.
Once the new NCE command station was installed, and the EB3 circuit breaker board installed, I could crawl under the layout at Shumala and take a photo like the one below. Yeah, wires everywhere, but at least they are labeled and I know what they are. Obviously I’m not among those who say “I’ll never even take a photo underneath my layout, never mind ever show it to anyone.” In fact, I kind of like photos that reflect reality, like this one: 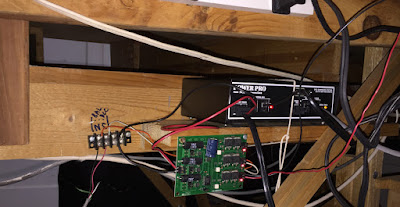 Once again, having a well-maintained Layout Notebook with up-to-date identity of electrical connections and cables proved invaluable. I’m glad to have this piece of electrical work behind me, and will definitely continue to make sure the electrical information in my Notebook is kept current.
Tony Thompson
Posted by Tony Thompson at 9:54 AM