A complex topic in railroad freight traffic is that of diversions and reconsignments (which are almost the same thing, though the terms are sometimes used differently). I’m familiar with this topic in regard to perishables, and learned a great deal about it in my interviews with former PFE (Pacific Fruit Express) traffic people. I touched on this topic briefly in a previous post (at: http://modelingthesp.blogspot.com/2015/02/waybills-part-37-routing-of-loads.html ). In the present post, I want to say more about it, including some illustrations of how model waybills can reflect this aspect of traffic.
(Charles Hostetler’s blog contains a nice discussion of some of these same issues, in his post with Andy Laurent for May 10, 2013, which includes some prototype information and also examples of model waybills; you can see that material at this link: http://cnwmodeling.blogspot.com/2013/05/diversion-and-reconsignment.html .)
First of all, a definition: “diversion” means change(s) in the ultimate destination of a load, while the load is underway in a railcar. Often the term “reconsignment” is simply used as a synonym for diversion, but if a distinction is made between the two terms, then “reconsignment” means a change in ultimate destination after a load has arrived at its original waybill destination. That distinction in turn would restrict “diversion” to only mean a change in the ultimate destination before the load arrives at the original destination.
To illustrate, a load of oranges from southern California, starting its journey with a waybill destined to “UP agent, Kansas City” and thus clearly intended to be diverted, may be diverted by the shipper to Cleveland before the car gets to Kansas City. The Kansas City yard clerks will be ready to modify the incoming waybill to reflect a new consignee. But if the car arrives in Kansas City without further information, it would be held pending notification of final destination, and sometimes that process is called reconsignment.
Note, incidentally, that if the load of oranges heading for Kansas City is diverted back westward, say to Denver, a new waybill would normally be created for a “new movement,” since if the car had originally been destined to Denver, it would not have gone to Kansas City from California. And if the car has to be held at Kansas City for more than a short time, the shipper will pay demurrage charges until the reconsignment happens.
Below are two examples from my layout of model versions of departing loads intended for diversion from the outset. (Loads with a specific, intended consignee could also be diverted in transit, but the outgoing waybill couldn’t reflect this.) Loads like this were sometimes called “rollers.” 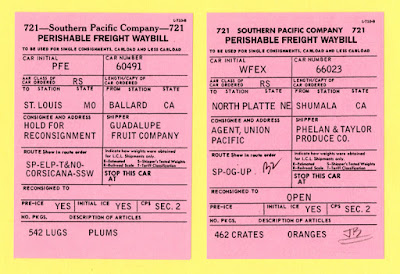 The format of these is slightly different. Note that the standard perishable waybill form, on which my model form is based, has a space for reconsignment (the prototype has multiple lines for this). Pacific Fruit Express allowed shippers three diversions of a load without charge (there was a fee for diversions after the third).
This covers originating loads which depart the shipper, intended to be diverted. That is what can occur for loads leaving the packing houses on my layout. But I also have a wholesale grocer which receives inbound produce loads, and waybills for those loads could reflect an en-route diversion. Here is an example, a load of potatoes from Idaho, originally destined to the SP agent at Oakland, California, and intended for eventual diversion. That agent received the diversion order, and when the car arrived, the waybill was altered by striking out the original destination information and adding the new information. The new information is in a different typeface, as would be expected. 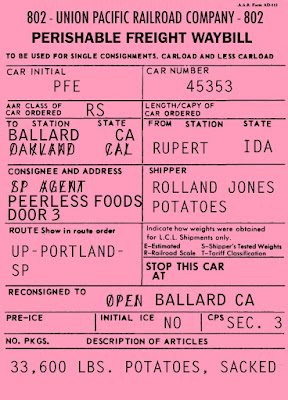 But there are other kinds of cargoes that may move with diversions during transit. This is certainly true for lumber, and lumber is different from produce in a very important way: it isn’t perishable. Thus lumber “roller” loads may be deliberately routed in a roundabout fashion to gain more time to find an optimum price. Perishables, by contrast, have to move as directly toward market as possible, and if diverted, diversions are chosen which minimize delay. Lumber traffic also differs in that it often involves intermediaries, usually brokers, during transit, even more than perishables.
Lumber bills may well have similar appearances to the foregoing examples, as shown by the example below. This load was shipped with a broker as the intermediary, prior to diversion. Here the billing typewriters used by the two clerks have the same typeface, the SP standard face. 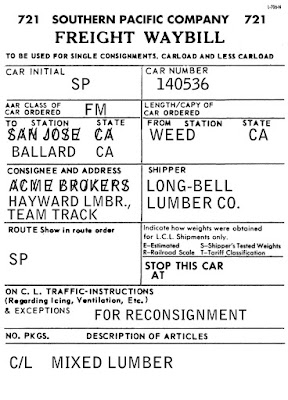 This is only a single diversion. I may try to represent multiple diversions on a perishable waybill, though it would be difficult with the limited space available on my model waybill. (By the way, I would choose an inbound perishable load in preference to lumber, to make a waybill reflecting multiple diversions, because lumber being delivered in California in the 1950s would not have traveled terribly far and would ordinarily not have had multiple diversions.)
Another category of traffic that could undergo diversions in transit was livestock. As my layout has only a single, small stock pen, I don’t plan to represent livestock shipment diversions,
Like many aspects of perishable shipping, I find diversions interesting. I don’t have scope in the operations on my layout to include too many waybills showing diversions, but I like to have a few. They are interesting, realistic and add variety.
Tony Thompson
Posted by Tony Thompson at 12:46 PM