One of the industries at my layout town of Ballard has been a machine shop, ever since the era when the layout was in Pittsburgh. In the map on my post about the old layout (it’s at this link: http://modelingthesp.blogspot.com/2012/03/survival-from-my-old-layout.html ), this industry was no. 24 on the map, and was called Santa Barbara Tool & Implement (the layout was then set in Santa Barbara County). In the late days of that layout, I changed the name to Santa Barbara Tool & Machine, to get more of a machine shop name. The building used on the Pittsburgh layout was a partly assembled Tru-Scale kit of the late 1940s, which I had purchased along with its original kit box. It was a Quonset hut, 40 by 80 feet in footprint.
[A little historical background: the Quonset hut was designed by the U.S. Navy in 1940 as a building that could be shipped anywhere in pieces, and assembled quickly by unskilled labor. It was based on, and looks much like, the British Nissen hut of World War I. More than 150,000 Quonset huts were manufactured during World War II, and after the war were sold in large numbers as surplus. The original hut was 16 x 36 feet, but soon additional sizes were made, 20 x 48 feet being one popular size, and ranging up to 40 x 100 feet. All were built with curved sheets of corrugated iron, usually galvanized. The goal was for a team of 10 Seabees to be able to assemble a Quonset in a day; with experience, 6-man teams could erect one in six hours.]
Below I show the kit box, proclaiming the “all metal” construction of the model, though in fact the interior bulkheads and stringers are pinewood strips, 1/4-inch square.

The construction involved gently bending the corrugated aluminum sheet around something roughly 3 to 4 inches in diameter (a glass milk bottle was recommended, another vanished item in most places), then gluing the sheet to the interior bulkheads and stringers. The kit directions provide a full-size floor plan to aid in assembly, and a perspective cut-away view of the interior bulkheads. (You can click on the image to enlarge it.) 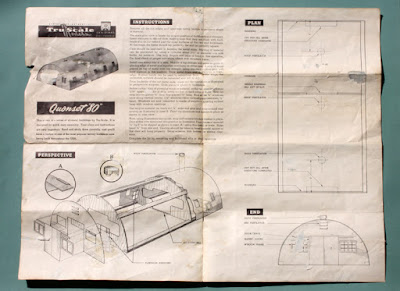 In the 1950s, there were plenty of Quonset hut structures around the U.S., used for a wide variety of manufacturing and warehousing purposes, so I liked the idea of having one on my layout. I had long intended to complete kit construction, along with maybe upgrading some details, like the rather poor kit windows, but had never done so. Now, with a chance to add this industry to the town of Ballard, I decided to work on the kit. I am now calling this industry “Santa Maria Tool & Machine” since my current layout locale is much nearer Santa Maria than Santa Barbara.
My first step was to shorten the building. I don’t have space for the full 80-foot length, so decided to cut it down. After all, prototype Quonset huts were built in a range of widths and lengths, and were essentially modular in 4-foot units (the rib spacing). My choice was to retain three side windows instead of the original five, and keep them centered in the side view. This meant a 48-foot length, which is what’s shown in the photo below. The other way to look at the length is that there are about 16 scale feet per side window, and I have cut down from 5 to 3 windows, thus going from 80 scale feet to 48 feet.
The directions have the comment, “best results with DuPont Cement,” though I don’t know what that was. The adhesive used, DuPont or otherwise, today had pulled away from the joints, and looks a little like ancient Walthers Goo or equivalent. I simply added a generous amount of canopy glue into the joint and re-clamped, using clothes pins (most reversed), This not only stiffens the structure but straightens the somewhat soft aluminum skin. 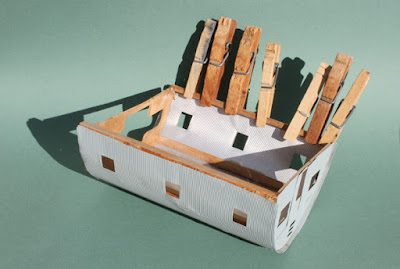 I will continue this process, joint by joint, until the entire structure is solidly glued together.I also have a plan to make simple windows, which don’t have to be too involved because this structure will be located a ways back from the edge of the layout, thus not seen up close.
[I should mention that today, Tichy and IMEX kits for Quonset huts are out there, though neither has side windows (as civilian versions commonly did) and both are smaller buildings. The Tru-Scale kit does show up for sale on the Internet from time to time, so if you want one of them, patience can be rewarded. There is also a paper model from Clever Models, with a large door let into one side, their kit no. S10.]
I am pleased to be working on this building, as it has been catching my eye for years and making me want to get into fixing it up. Now it’s under way, and I’ll report on progress in a future post.
Tony Thompson
Posted by Tony Thompson at 10:28 AM

Email ThisBlogThis!Share to TwitterShare to FacebookShare to Pinterest
Labels: History, My layout, Structures