A shop track for Shumala

As part of my engine service terminal at Shumala, I built a roundhouse from a Banta Modelworks kit, and added a small machine shop at the rear. This was described in an earlier post (at: http://modelingthesp.blogspot.com/2014/01/shumala-roundhouse-part-3-machine-shop.html ). In the conclusion to my series of posts about building the Banta kit, I showed an overhead view of the new roundhouse in place, with a stand-in shop track simply lying in the approximate correct location (that post is at this link: http://modelingthesp.blogspot.com/2014/02/a-roundhouse-for-shumala-part-5.html ).
Over time, with the shop track still not spiked down nor powered, I have had to omit from operations any waybills for cars delivered to or picked up from the shop, and so the shop track has remained on the layout “punch list” for all that time. While doing some other electrical work on the layout (as I have described previously at: http://modelingthesp.blogspot.com/2016/03/changing-throttle-connections.html ), I simply gravitated to this additional task, and got the track spiked down, and feeders dropped to power it.
With the track in place, I added dirt “ballast” to fit with what one sees in SP prototype shots around shops and yards.  This “dirt” is real dirt, screened to a small size. I used my regular method to apply this, mist-wetting the material first with “wet water” (a drop of dishwashing liquid in my spray mister), then using diluted matte medium through an eye dropper to fix it in place. Here is the area with the track completed and ballasted. 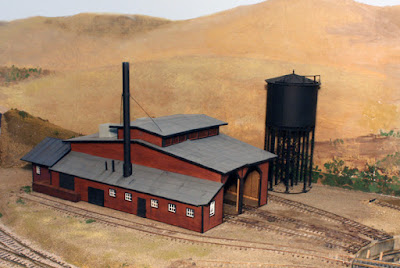 Setting this track also allowed me to plan the space for the coal pile needed alongside the roundhouse, as the boiler room would consume that fuel. (In fact, in the early 1950s, when I model, SP continued to supply coal for many domestic fuel uses, from heating of section houses, cabooses and depots, to cooking in living quarters of depots or section housing, and boilers such as the steam supply for the roundhouse, or for sand house sand dryers.) I mentioned this in a prior blog post about my gondola fleet (see it at: http://modelingthesp.blogspot.com/2011/04/choosing-model-car-fleet-8-gondolas.html ).
Though photos are not plentiful, it is evident that SP often used a three-sided, open-top storage area for domestic coal, so I decided to do the same. I measured that it could be 4 scale feet deep, so proceeded with that as the critical dimension. I just used Evergreen scribed styrene sheet, with interior corner posts to hold it together, since those posts will be hidden by the coal pile.

I also decided to add a wheel track. These were commonly seen around roundhouses, and could by located anywhere that was convenient. Workmen could roll the wheelsets, or even complete trucks, on and off the turntable, to move them as needed between a wheel track, roundhouse shop, and the repair track area. The photo below shows two arch-bar trucks being moved by workmen, at the Merchants Despatch shop in East Rochester, New York (detail of photo from Library of Congress, Prints and Photographs Division). You can click to enlarge.

My wheel track then was set up to come off from the turntable, as seen at lower right (the coal storage is not in place in this photo). Tracks like this varied from quite short to car length.

I will have more to say about trucks and wheelsets on this track in a future post.
Lastly, I added some coal to the coal box and experimented with placement, near the double door leading into the boiler room of the roundhouse, as you see below. I’ve posed a workman with a shovel, and a wheelbarrow, next to the coal box. 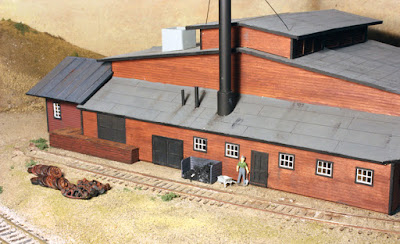 Rather than show the coal pile at maximum, it seemed more realistic to show it partly depleted, to reflect ongoing use in the boiler. Also visible at left are stacks of car wheels, and truck sideframes, about which, more later.
Finishing this side of the roundhouse area, and particularly setting up another switching destination at Shumala, has been fun and will definitely enhance this part of the layout.
Tony Thompson
Posted by Tony Thompson at 10:19 AM