The title here refers to an operating weekend in the Seattle-Tacoma area, known as Soundrail, that is convened in alternate (even-numbered) years. It involves a number of layouts and 60 some participants, from outside the area, many of them invited. This year it was held on March 17–19, and it was the first year I have attended.
Although there were 24 layouts in all, I operated (as did almost everyone) on only three, and visited a few more on Thursday night’s open houses. The first day I was at Brian Ferris’s HO scale Port Townsend Southern in Olympia. Though not a large layout, I really liked how well done it is, and our crew of eight was busy all day. Many of his scenery features are very nicely accomplished. The photo below shows Glen Presley, with whom I ran a local freight at one point, though in this photo he is switching the yard at Chambers Point. Glen was one of eight Canadians at the event. 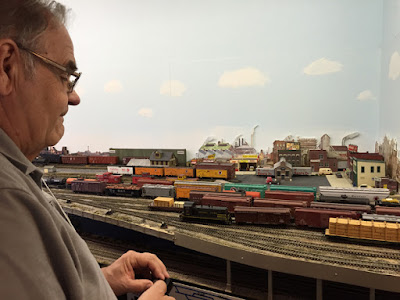 One of the layout visits was to Jim Younkins’ N scale Mud Bay & Southern, which has just exceptional scenery. Jim has taken advantage of the opportunity in N scale to have industries of more realistic size than is practical in larger scales, and many of his model industries were really excellent. I will show one example, his Simpson Door Plant, obviously with plenty of switching and doubtless calling for careful planning to switch efficiently. Quite a layout. 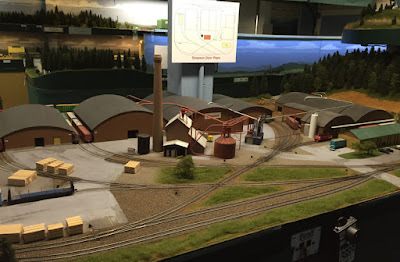 Bill Sornsin’s large and very ambitious HO Cascade Division (Great Northern) was my second layout for operation, and believe me, it is truly impressive, even in its early state of development. The photo below shows Mark Schutzer operating a local switch job at Holgate Street (Seattle) on the upper deck, with the “south staging” (Portland, etc.) on the lower deck. 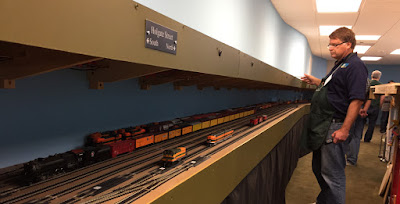 My third layout was Roger Nulton’s Monon Route in S scale. The scenery is truly excellent and the layout ran very smoothly. Shown here are Ray DeBlieck, left, uncoupling a car to set out, and Scott Calvert. The fall foliage is very realistically rendered, unlike so many layouts which just have trees of crimson and fluorescent orange. Anyone who has lived in parts of the country which do have that foliage in the fall can recognize how accurately Roger has modeled it. 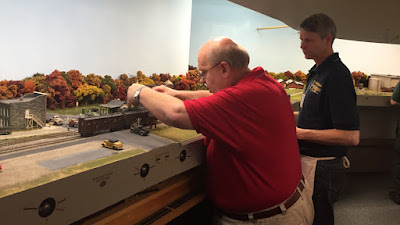 I was quite impressed with not only the overall scenic effect, but also with many of the scenic details that Roger has done. I will just show one example, a stock pen with one of those “often seen but seldom modeled” features, the worn spots in the grass leading to the pen. It’s shown below. 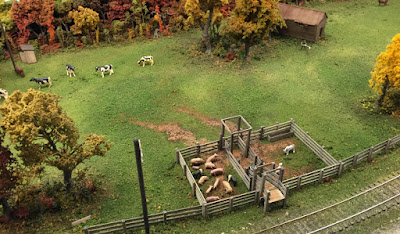 Last, I have to mention one of the most welcoming signs a traveler like me can see, which I photographed on the way to departure at Sea-Tac airport. Turned out the sign was accurate, too, and our travel group took advantage of it to grab a quick dinner. 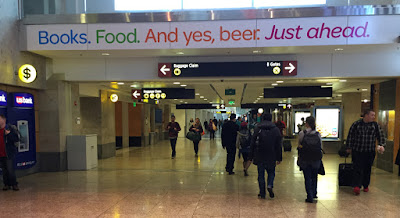 This year’s Soundrail was a great experience, and I enjoyed all parts of it. But the main reason I have described what’s involved is to promote the idea of attending one of these events if you can. As the saying goes, if you get the opportunity to attend an operating weekend, run, don’t walk.
Tony Thompson
Posted by Tony Thompson at 10:41 AM