The branch end at Santa Rosalia 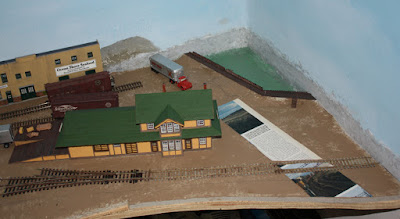 The paper strips laid in place in the right foreground will be used as templates to cut styrene sheet for the roadway to be located there. This will be Willow Lake Road, which runs past the depot. You can also see the three-way Peco switch at left, not yet wired.
At the left back of the photo above is a building flat, which is the “Ocean Shore Seafood” fish cannery, the kitbashing of which I described in a previous post (you can see it at: http://modelingthesp.blogspot.com/2015/05/kitbashing-santa-rosalia-cannery.html ). In the rather aerial perspective of the photo above, you can see that the cannery is not quite a true building flat, but does have a narrow roof segment, though that is not too evident at normal viewing height.
Although I have several industrial and other secondary tracks still to install here and in others of my towns, the track shown in the photo above is the last main track to be installed on the layout. I’m far from done, but it is fun to continue to make progress.
Tony Thompson
Posted by Tony Thompson at 10:42 AM