The previous post on this topic mostly described work to complete a representation of the Chrysler trucks on PFE express cars 901–925 (see it at: http://modelingthesp.blogspot.com/2016/02/pfe-40-foot-express-cars-part-2-trucks.html ). Other modeling continued. I added the nice fan control box from the kit, which only goes at the side sill on the left side of the car, as shown below. (InterMountain gives you two of them, so I added the second one to another BR-40-10 stand-in I have.) The photo below shows these features, and also is a glimpse of a completed Chrysler truck. (You can click to enlarge.)

I chose to add an Apex steel-grid running board and brake step, Plano Model Products no. 197. I use canopy glue for this kind of application, because it strongly bonds dissimilar materials, and more important, remains flexible, as the metal running board expands and contracts. If not familiar with this adhesive, you may wish to read my extended comments on it (see: http://modelingthesp.blogspot.com/2013/05/a-few-words-in-praise-of-canopy-glue.html ). After application, I painted the step and running board Tru-Color no. TCP-135, SP Dark Olive Green. This brings up the subject of roof color.
The roof provided in the kit is painted the same color as the car body. There is evidence that at least the first few cars converted for express service did have Dark Olive Green roofs. However, photos of later cars in the number series (PFE 901–950) seem to show a darker roof color, likely black as was used on passenger cars. Since the car number of my kit is PFE 909, I decided to model it with the green roof. I also have a stand-in model of PFE 928, and it has a Grimy Black roof.
While on the topic of paint, a color photo may be of interest. As stated in the prior post, the body color of these cars was SP and UP Dark Olive Green, and lettering is Dulux Gold. This photo of PFE 942 is from the E.H. Mohr collection, but as it is in the form of an old print, the color rendition may be questionable. Lettering arrangement is well depicted, though. 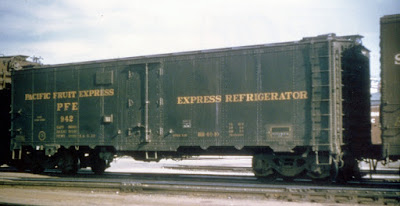 Note that as was typical of the later cars in the series, a painted yellow circle was used instead of a dummy fan plate over the left truck. You can also see the Symington-Gould Type XL trucks fairly well here; these were applied to cars PFE 926–950.
Finally, note in the photo above that there is a route card on the board over the left truck, as well as a card on the secondary placard board next to the door. The route card board location was commonly in use on reefers, but the placard board, less so. I have discussed the route card board location on PFE reefers in a post (see it at: http://modelingthesp.blogspot.com/2011/11/route-cards-4.html ) which followed along with a general thread of how route cards were used and even how they were applied (it can be found at: http://modelingthesp.blogspot.com/2011/11/chalk-marks-and-route-cards.html ). Once the car is weathered, I will apply these also
My last comment on the InterMountain kit, now that it’s complete, is that I have some reservations about the color IM painted this model. It matches neither Pullman Green nor a color drift panel for SP Dark Olive Green, and is definitely lacking in brown relative to either of those colors. I will have to weather the car lightly, since it would have been relatively recently converted and painted for my 1953 modeling time, but I hope to obscure the paint color shortcomings. 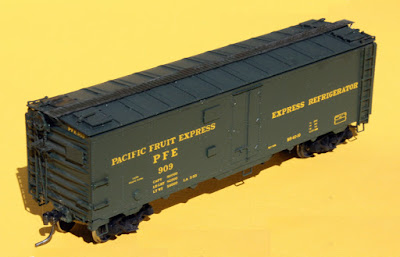 The completed car, shown above, meets the operating needs I have for one of these 40-foot express reefers. Thanks again to Ross Dando for the superb castings that made possible the Chrysler truck representation. But as mentioned, the car still needs to receive some weathering before entering service.
Tony Thompson
Posted by Tony Thompson at 9:49 AM