I scheduled an operating session for the just-past weekend of March 5 and 6, to bring into use several additions to the layout, to further exercise some changes in my waybill system, and of course to have some fun in the process. As usual, there were two two-person crews scheduled each day, to implement the work pattern that seems to work well on this small layout.
Both sessions went well in terms of realizing what had been planned, though there were some stubborn turnouts that were often dead spots. I will have to redouble my efforts to fix a couple of these. But the car cycles and amounts of switching work seemed to work properly. I am always fascinated at these sessions, in my role as “source of additional information” while watching crews work, how many different ways a town can be switched. There were a couple of unusual techniques this time, too.
The most noteworthy, I guess, was when Larry Altbaum, working at Shumala, asked me, “Does your turntable work?” This seemed an odd question, as access to the fuel and water columns, or the roundhouse, was not intended to be in the plan. But I answered, “Sure,” and went to see what was going on. Turned out he and his fellow crew member, Lisa Gorrell, had decided to do a car run-around by using the turntable, instead of the fairly long track provided for the purpose. Here they both are, with big grins of, I suppose, triumph. You can see the switcher retrieving its car in the middle distance, alongside the yard office. (You can click to enlarge.) 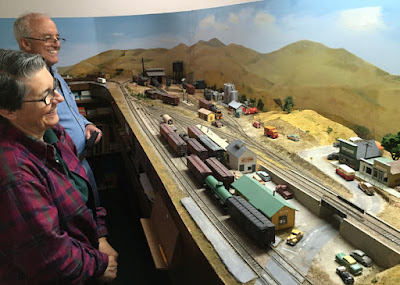 As visible in the foreground, they had indeed kind of filled up the siding with cars, making the usual run-around (siding-plus-main) less attractive to sort out a single car.
There was, naturally, equally much activity on the Ballard side of the layout, where the photo below shows the crew of John Sutkus (left) and Jeff Aley hard at work. Jeff was conductor and is deciphering waybills to see what task is next. Jeff is himself knowledgeable and experienced in waybill design, so I enjoyed letting him have a chance to switch with my versions. 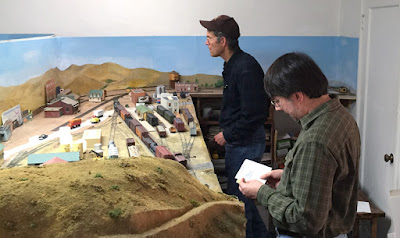 One of the new wrinkles I added to this pair of sessions was operation of express reefers, in accord with the ideas I described earlier about seasonality of produce shipments (see it at: http://modelingthesp.blogspot.com/2016/02/operations-seasonal-traffic.html ). It being March, the early strawberries are just coming into harvest in central California, so Guadalupe Fruit in Ballard is shipping them. Here is the mainline extra train, arriving with an REX express reefer to set out at Shumala (and with a loaded one to pick up), trailed by a mail storage car (see my description of the model project at: http://modelingthesp.blogspot.com/2014/08/modeling-sp-head-end-cars-part-7b.html ) and a 60-foot baggage car. Power is Class P-4 Pacific no. 2402 (a Westside model). 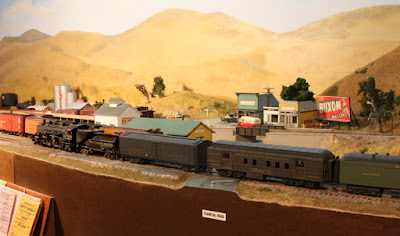 Another crew on the weekend is shown below, working at Shumala, Dave Falkenburg at left and David Parks to the right. Falkenburg is the conductor here, and evidently is “having a think” about the waybills, which he has tilted up against each car. Engineer Parks waits patiently for direction. David is holding a tethered or plugged-in throttle, but one upgrade I’m looking forward to is the conversion to radio throttles. One of these days. 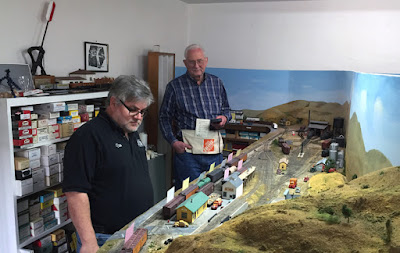 The next time I put on sessions like these, I hope to have still more changes and improvements to the plan for each session, while continuing to refine and balance work loads for each crew in each location. The balance isn’t bad now, but can always be better. And of course all the waybills will cycle, so there will be in a sense a whole new scenario for the freight cars and trains. Looking forward to it!
Tony Thompson
Posted by Tony Thompson at 8:52 AM