My column in the March MRH

A month ago, the first part of a two-part series about tank cars was published as my “Getting Real” column in the February 2016 Model Railroad Hobbyist, or MRH. [As with every issue of MRH, you can download it any time, for free, from their website; you may wish to use this convenient link: www.mrhmag.com .]
What is news now is that the just released March issue of MRH has Part 2 of this series. This second part addresses modeling of tank cars, not with project descriptions per se, but with descriptions of approaches, from doing little more than upgrades to commercial models, to swapping of tanks and underframes, and finally to scratchbuilding methods for both underframes and tanks.
This Part 2 does not have much direct reference to Part 1, but it does refer to prototype features and details, assumimg a familiarity with the content of Part 1. Additionally, the Appendix of significant dates, omitted accidentally by the good folks at MRH from Part 1, was added at the end of Part 2.
Much of the content of the column’s Part 2 has been covered in more detail in several magazine articles and blog posts of  mine, though bringing all of it together in one place seemed useful to me. I did add a photo of one of Richard Hendrickson’s tank car projects, described in the August 1996 issue of RailModel Journal, as a cut-down Athearn tank to make a General American-built 10,000-gallon tank car. Mostly, Richard simply shortened the tank and underframe to the correct lengths (which was time-consuming work — but not really difficult work). Here is how that car looks today (same photo is on the MRH column).

I should also mention that I made some background comments about the Part 1 column in a prior post (that post can be found at the following link: http://modelingthesp.blogspot.com/2016/02/my-column-in-february-mrh.html ), including a reminder that the entire idea of explaining and showing tank car modeling to others got its start for me in the form of a joint clinic, developed with my good friend, the late Larry Kline. Part 2 is about tank car modeling and Larry was an excellent modeler, so I want to add some comments here about Larry’s work, even though this material was not in my column.
Larry was an O scale modeler, and as many in O scale are obliged to do, often had to kitbash or scratchbuild rolling stock to get what he wanted. A description of how he built one of his scratchbuilt tank cars remained in our joint talk for years. It was made from Plastruct tubing and ends for tank and dome, and an underframe made from styrene sheet. Here is a visual summary of the construction process. (You can click on the image to enlarge it.)

The underframe shown at right has brass detail parts. The result was a nice tank car, unlike any commercial product in O scale at the time, as you see below (Larry Kline photo). 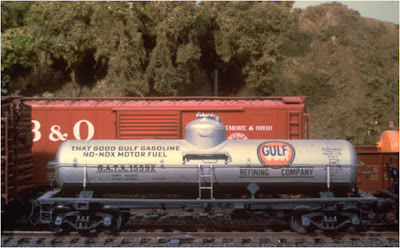 I hope this additional background for my March 2016 MRH column is of value, and may encourage those to read it, who have not already done so.
Tony Thompson
Posted by Tony Thompson at 10:33 AM