From the beginning of controlling my layout with DCC, I chose North Coast Engineering (NCE). My starting system used an NCE Power Cab as the basis. This is a tethered throttle, and more throttles can be added, though the basic power level of 2 to 2.5 amps remains. I later added one additional throttle, and thus have mostly used two throttles, one for each side of the layout. The performance and convenience of this system has been excellent.
I had placed four plug-in panels on the fascia surface around the layout. Having attached Velcro strips to both the throttle back and to the fascia by each plug-in panel, throttles with their curly-cord connections could be stored by attaching them to the fascia next to any panel. Thus my throttle stations have looked like this: 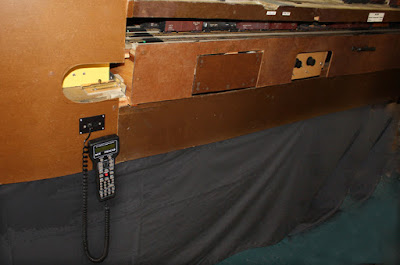 To the right you can see strings of cars on the staging pull-out table, and in the face of it, the drawer used for storing open-car loads (a project described earlier, at: http://modelingthesp.blogspot.com/2015/04/a-drawer-to-store-open-car-loads.html ).
Just recently I decided it was time to go wireless. So many layouts on which a person may operate now have radio, that it seemed like time to change. To do this, I replaced my Power Cab foundation with a regular NCE command station and a radio antenna, and then I also needed to convert my throttles from plug-in to radio. This is fairly simple to do, and you can have NCE do the throttle conversion for you. I also decided to divide my layout into two power districts. It is not a particularly big layout, and this division is not needed for power distribution, but it does separate the two districts so that a short in one does not affect the other. I used the NCE EB3 circuit breaker for this.
Of course, to do this division I had to crawl around under the layout and decipher my existing feeders and terminal strips. I should hasten to say that I do label all feeders underneath the layout, by writing their designation next to them with a Sharpie, right where they emerge under the plywood or whatever the local sub-base is. I also have a long-continuing “layout notebook,” in the form of a three-ring binder, in which I try to record specifics of all new wiring. I showed a page of this notebook in a previous post (see it at: http://modelingthesp.blogspot.com/2012/08/a-modeling-journal.html ), though that post really was primarily about my modeling journal, not the notebook. Here’s another notebook page, with a lot of feeders identified. When things get complex, color coding comes into play. 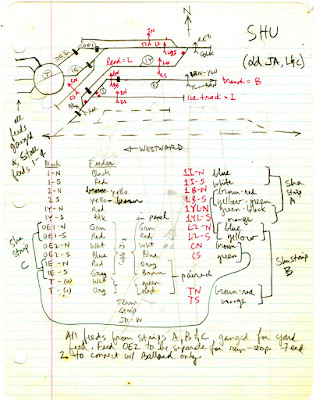 This kind of information is vital when a job like this one, to rearrange the layout power districts, has to be done, so I’m glad this all these records have been maintained over the years.
I now have my original throttles converted from plug-in to radio. I appreciate Ray DeBlieck’s help in getting this done. The photo below shows one of the first trains moved with a newly cordless throttle. At least for now, the cords and fascia plugs remain in place for when they might be needed, but engineers now can walk wherever they need to go around the layout. Nice change for the better, and I enjoy the freedom as much as visitors will.
Tony Thompson
Posted by Tony Thompson at 1:16 PM