In a couple of prior posts, I described progress on my creation of Oso Flaco Creek to act in part as a scene divider between my towns of Ballard and Santa Rosalia, as well as a scenic element (the most recent of these posts is at this link: http://modelingthesp.blogspot.com/2015/03/modeling-oso-flaco-creek-part-2.html ). My branch line crosses this creek to reach Santa Rosalia, and I decided the bridge should be an SP pile trestle of standard design. I explained the components of the trestle design in a previous post, and also showed my construction method (you can see it at: http://modelingthesp.blogspot.com/2015/04/building-sp-pile-trestle.html ).
I combined two steps in installing the pile bents and bulkheads of the trestle, namely to add a thin layer of paper-mache to the bed of the creek, which needs a little texture, at the same time as the trestle was installed. I mixed a water-base paint (a color called “Almond”) into the paper-mache to soften its gray color. This way, the trestle parts were glued down with the paper-mache and were also embedded in it at ground level.
In the photo below, you can see the two pile bulkheads and the bent of piles at the creek center, and behind the trestle site, the creek disappearing toward the backdrop, as I had begun in the second creek post (cited at the top of this post).

To keep the trackwork and surrounding ground level, I chose to use a thin styrene sheet to make a track base, with styrene strip along the edges crossing the creek to simulate the beams visible at the edge of this kind of bridge (see my first pile trestle post, cited at the end of the first paragraph above, for a drawing).
As shown in that first post, I originally planned to use 0.020-inch sheet under the track, and even showed a piece of such sheet in place, but decided to use something thinner still, namely 0.005-inch sheet. This is structurally all right, because the sheet really will only act to hold the ballast on this kind of ballasted-deck trestle. The styrene sheet was set atop the bent caps and was glued in place, and the trackage above it installed.

The sheet being transparent, you can see the support structure beneath, though of course this will disappear when the trestle is ballasted.
I use a mixture of light gray and dark gray ballast for mainline SP trackage, and with this ballast applied to the track crossing the trestle, it looks like this: 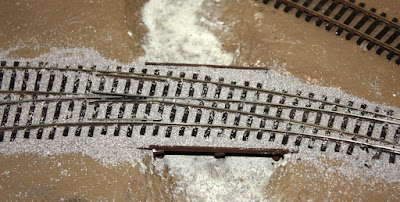 The background track is the lead to the Jupiter Pump and Compressor plant. (If interested, you can read more about my construction of that industry at the following link: http://modelingthesp.blogspot.com/2015/10/jupiter-pump-compressor-part-2.html .)
From more of a side angle, you can see the piles underneath the transverse caps that support the bridge. Obviously the creek bed and banks remain to be scenicked, but with this bridge complete, I can proceed with those tasks without worrying about exactly where the track is located.

Completing this bridge has been part of the process of bringing the end of the branch, at Santa Rosalia, into scenic contact with the adjoining scenic area, the town of Ballard. I look forward to more fun developing scenery elements in this area.
Tony Thompson
Posted by Tony Thompson at 7:55 AM