I have mentioned the practice of Pacific Fruit Express in washing its cars, until the early 1950s when their request for funds for a mechanical washer resulted in the discovery that they had been washing cars, whereupon SP President D.J. Russell demanded that they stop. Prior to that, they had been washing cars, as retired CMO Earl Hopkins put it, “just like elephants at the circus, buckets and long-handled brushes.” You can see some of the remarkable numbers of cars washed in the heyday of that practice, at the following post: http://modelingthesp.blogspot.com/2016/11/appearance-of-pfe-reefers-part-2.html , and a follow-up with more comprehensive data, at: http://modelingthesp.blogspot.com/2016/11/appearance-of-pfe-reefers-part-3.html .
But in all the PFE company photography examined when PFE archives were on the way to the California State Railroad Museum (CSRM), and in searches since that time, I never could find a single photo of this washing being done. But to my surprise, when at CSRM on March 1 last week for a committee meeting, I was browsing some 1950s issues of the Southern Pacific employee’s magazine, the Bulletin, and found a story about fathers and sons who worked for the railroad. They were almost all SP employees, but two of the families turned out to work for PFE. One was named Calderon, and the other was the Smiths, father Walter and sons Eldon and Henry. Like all the family groups, they were shown at work, and the photo, taken at the PFE Roseville shop, showed them washing a car! Here it is. 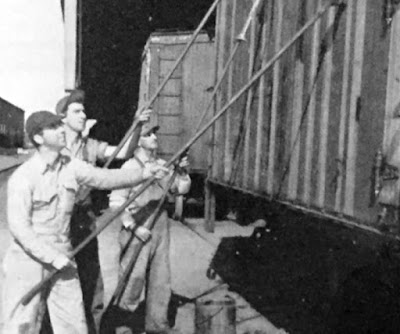 From left, they are Eldon, Henry and Walter Smith. The sons were apprentices in the shop, and Walter was a carman helper.
No doubt this photo was posed, but it does show the tools, just as Earl Hopkins described. There is even a bucket, right in front of Walter. The Calderon family (all carman helpers) was shown at this same location, but with carmen’s tools instead of washing brushes.
I was fascinated to finally find a photo of this interesting operation. I suppose this success is, in a way, a result of having the absence of the photo nag me for years. That in turn meant that alertness to such a photo was bobbing around in the back of my mind all this time. Sometimes you do eventually find something you have been wanting to find.
Tony Thompson
Posted by Tony Thompson at 9:41 AM