In the previous post (see: http://modelingthesp.blogspot.com/2015/05/building-guadalupe-fruit-part-3.html ), I showed the basic building assembled, though without windows installed or any detailing. In this post, I continue to work on completing the building, adding a number of components.
An important first task was to insert all the doors and windows, prepainted as described in the previous post. I used canopy glue for this installation. Here is the building at this point: 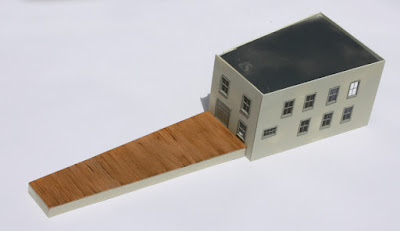 The temporary Bristol board roof stiffens the structure, but is not the final roof. Since the final roof will be removable, something else is needed to create more structural stiffness below the roof. I installed a floor between the two rows of windows. To do this, I glued 1/8-inch square styrene strip along the long walls, inside, to serve as floor supports. The floor also serves as a view block (preventing seeing first-floor windows through the second-floor windows.) Before installation, I painted the top of the floor with Tamiya paint TS-1, Red-Brown, a nice wood color that I use a lot. In the photo below, you can see the floor fitted into the structure, with the roof removed. And yes, the rear wall, that faces away from the layout edge, has a small patch and no windows. 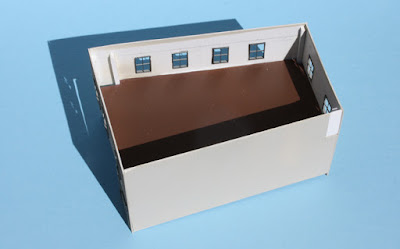 The building also needs a sign to designate the industry name (helpful for visiting operation crews). I gave some thought to using decal letters, to give a “painted-on” look, but the sharp edges of the styrene clapboard siding made me worry about how decal manipulation might work. I decided instead to make a separate sign board, using styrene sheet and framing it with scale 1 x 6-inch styrene strip. I simply printed out the name at a size that would fit the signboard. 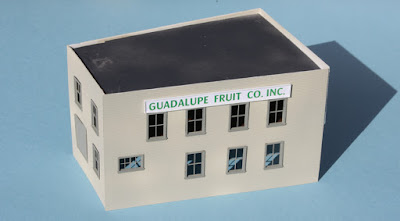 The next part of the project was the truck-unloading dock, on the right-hand side of the photo above. I planned this truck dock as an inset into the end of the building, for which, so far, I had only left an opening. It is shown in the photo below. Note that corner trim strips have not yet been applied; I was waiting to see how they would work around the truck dock. 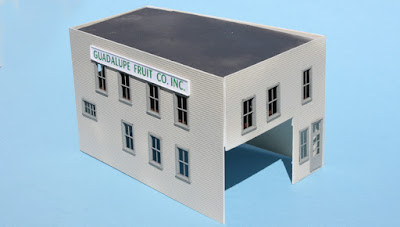 To build an insert for this opening, I decided to use the same clapboard sheathing appearance as for the rest of the exterior, using Evergreen sheet no. 4051. This inset was designed so it could fit right into the opening in the building. Since the doors on this truck dock will not be very visible on the layout, being inside the inset, I decided that I didn’t need Grandt Line or other detailed model doors, and chose instead to just make appropriate size openings in the new wall and put V-groove sheet behind the openings.
The openings were made with the “corner chisel” I described in Part 3 (link provided at the top of the present post) to cut the corners and then yield the two door openings.I then fitted pieces of the clapboard siding, and a deck of Evergreen V-groove no. 4080, and a short piece of Central Valley stairway for ground access to the deck. Here is the resulting assembly, with pieces of 1/8-inch square styrene in each of the corners: 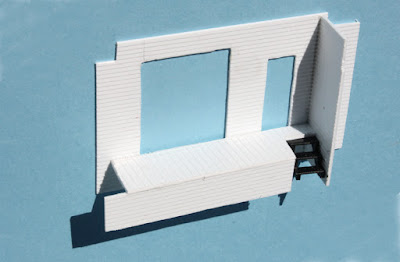 I then painted this entire assembly the same color as the walls of the structure, Testor’s “Flat Aircraft Light Gray,” no. 1233, though you can see that the color is closer to cream than to gray. I could then paint the deck an aged wood color, and make up separate doors to be painted “Flat Aircraft Dark Gray,”no. 1226,  the trim color of the rest of the structure.

I still have work to do on the roof and of course, the corner trim strips, but this building is now much more complete looking. It will serve well in my next operating session.
Tony Thompson