Yep, even those dragons that are long in the tooth sometimes crop up on a layout and have to be slain in their turn. Most of my prior posts about my “electrical wars” have had to do with newly arising problems, but occasionally, as in the present post, it’s an old one that somehow managed to keep out of sight. (And by the way, the easiest way to read earlier posts in this series, should you wish to do so, is to use “electrical wars” as a search term in the search box at the right.)
The “old one” I refer to was in a track segment that has been on the layout at least 30 years. In the early days, when the layout was in Pittsburgh, PA, it hosted several industries at the rear of the town I then called Jalama. It was a regular feature of operating sessions, because one of its industries was a busy citrus packing house. Here’s a photo from that era, when this track was operated by a mythical short line, the Lompoc & Cuyama: 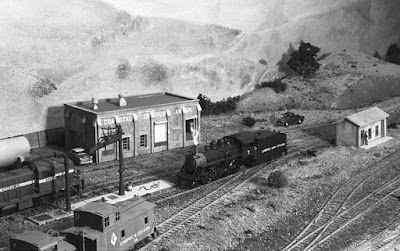 This structure could just accommodate two reefers at a time for loading, so that helped keep switch crews busy. The small structure at the right of the photo is the yard office.
When I moved the layout to its present home in Berkeley, I decided to put an Associated Oil Company dealership in the location where Coastal Citrus is seen the photo above, and to move Coast Citrus to the end of the branch line, at the Pacific shore, thus better fitting its name. (Incidentally, I published a full account of designing and building that dealership, in the March 2014 issue of Model Railroad Hobbyist; you can read or download that or any issue of MRH, for free, at their website, www.mrhmag.com .) That bulk oil dealership also got its share of switching work, on that same track. Here’s a view of that dealership, in a photo taken with the yard office in the foreground: 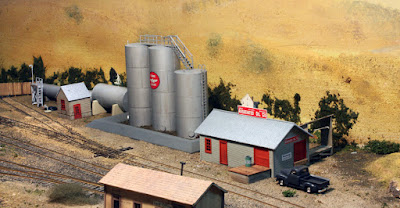 What then happened wasn’t recognized at first. I decided to improve the wiring in this whole area of the layout, by isolating all turnouts and then separately feeding all track between turnouts (as I described in a post in 2012: http://modelingthesp.blogspot.com/2012/09/electrical-wars-part-2.html ). This minimizes the role of turnouts in power routing, for one thing. I designed the new feeder locations carefully, installed them all, and then went back and cut all the new gaps that were needed. This was all fine, or seemed so. because, as I realize in hindsight, I was not very actively switching on the back track at Associated Oil. Very occasionally I would think of doing so, and would get a short, but since it wasn’t important at that moment, I let it go. “Must be something simple, it always worked before; I’ll fix that one of these days,” is the kind of comment I would make to myself.
But when I got a little more serious, preparing for the BayRails operating weekend in recent days, I thought I surely could fix this little problem simply. But the short when the turnout was placed in the reverse orientation was stubborn. All gaps were clean, all power feeds in the right place — or so it seemed, as I checked and re-checked against my wiring notebook, where all electrical work and modifications are recorded. This turnout had its frog powered from a slide switch, thus electrically dependable, or should be.
Suddenly I noticed that this particular frog wire was on the wrong side of a gap! The frog wasn’t being powered from the slide switch at all! I must have just missed the correct location when cutting that new gap. At least it was an easy fix. Snip off the feeder to the wrong place, re-locate and solder the same wire to the correct place. When done it looked like the photo below. The two gaps are indicated by the white arrows, and the purple arrow shows where the wrong frog wire went. The new frog wire, with yellow insulation, is obvious. With this change, the problem entirely disappeared. 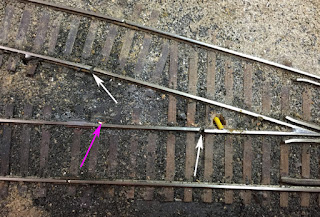 I of course promptly painted that yellow wire a dark brown color to hide it.
Though the eventual fix for my problem was easy, it was the devil to diagnose, as can easily happen with layout electrical problems. And in a way it was made worse by the existence of a wiring notebook, with careful sketches of exactly how the wiring changes were designed. Everything as written was impeccable. It just turned out that it was the implementation that was defective. Well, at least it’s a problem solved and maybe a lesson learned too.
Tony Thompson
Posted by Tony Thompson at 7:46 AM

Email ThisBlogThis!Share to TwitterShare to FacebookShare to Pinterest
Labels: Electrical, My layout, Techniques