In Part 1 of this series, I attempted to describe what a chemical repackaging business is, and the ways such a business can work. I also showed the beginning of my assembly of elements for the business of this kind on my layout, Pacific Chemical Repackaging. (That background post can be found at: http://modelingthesp.blogspot.com/2017/02/a-chemical-repackaging-business.html .)
My blog posts sometimes attract comments, sometimes not. Usually they are questions of clarification, but sometimes they are suggestions or additional pieces of information. The previous post on this topic attracted one of the latter. Richard Townsend not only remembered and mentioned an article by Kathleen Renninger, from the November 2001 issue of Model Railroader, about applying a stucco-like coating to a brick building. He was even kind enough to send me a scan of the article, entitled “Hitting the Bricks with Stucco,” which was on page 104 of that issue,
Kathleen used drywall compound, a material that is easy to work with, and I have experience with it myself for other tasks. But not having any on hand, though wanting to try a stucco building, I rummaged around in the garage and found a container of Red Devil premixed vinyl spackle. This material spreads smoothly and sticks well, so I thought I would try it on my styrene building (shown in the first post), which, like Kathleen’s, is a Design Preservation kit.
I have a range of tools that I thought would be useful for this project, and I ended up using all three. One is a conventional putty knife, but worn from years of use so that it no longer has sharp corners, and the working edge tapers almost to a sharp edge. We have a new one for home repair projects, but I often use the old, worn one in the layout room. To that I added a couple of palette knives, some sort of plastic, that you can find at any art store. They have the advantage of a much narrower tip than the putty knife, and are more flexible. 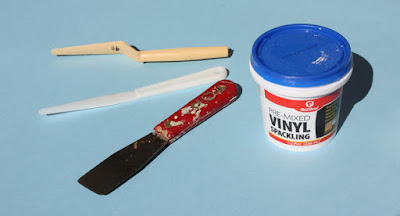 I decided to just spread on the spackle and see how it worked. The photo below shows the building with freshly applied spackle, though soon after this photo, I cleaned all the window sills and lintels. (You can click on the image to enlarge it, if you want to see the texture at this point.) 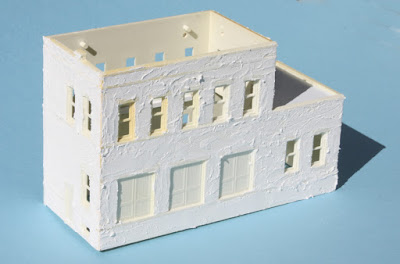 Kathleen suggested waiting 24 hours to dry completely, which might be a good interval for drywall compound, but this vinyl spackle package recommends two hours. That was ample, and in fact I would caution that you should not delay in cleaning any excess in window openings, etc. Once it was dry, I used some 100-grit sandpaper for less than 5 minutes and removed practically all the irregularities.
Careful examination of the “stucco” at this point, with illumination at an angle, did reveal a few places where the surface was uneven or pits or bumps were evident. I made a second application, this time using a narrow applicator, to take care of all these problems, then sanded again with 100 and 220 grit paper.
Although one could doubtless obtain a truly smooth surface with this spackle, as one would do in home repairs, I decided not to do that.  This particular industry is over a foot from the edge of the layout, and I thought it desirable to leave some irregularities that could be noticed. Of course the texture of prototype stucco is far below the the threshold of visibility in HO scale, but I wanted to suggest that kind of surface.
Having looked at prototype industrial buildings with stucco exterior, and found a number of historic photos on line, I chose to go with a tan color. Rummaging around in my collection of old Floquil paint, I found a bottle of “Earth,” which seemed to have about the tone I wanted. I went ahead and airbrushed the structure with that color. The photo below shows the structure at this point. It still needs the sills and lintels painted a concrete color, and of course roof coloring. The window frames could be gray or perhaps brown. I haven’t decided yet. 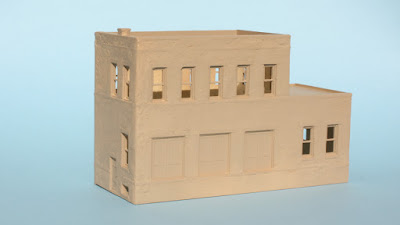 I also have to design signage for this business, and will adapt an older sign used on my placeholder for this industry on the layout in past years. Then this building will begin to look like the core of a repackaging business! I will return to those finishing steps in a future post. But thanks again to Richard Townsend for suggesting the stucco option. I’m pleased with how it looks so far.
Model railroads always have to deal with space constraints, and our industries are almost always undersize, sometimes comically so. But if you Google “chemical repackagers” you will find images of a number of these businesses that do not operate out of particularly large structures. So maybe this industry on my layout, for one, isn’t as over-compressed as others. I like to think so.
Tony Thompson
Posted by Tony Thompson at 10:43 AM