In the previous  post in this series, I had completed the Design Preservation kit (no. 103, “Cutting’s Scissor Co.”) that I chose as the structure for my chemical repackaging business (such businesses are described in my first post on this topic, which is at: http://modelingthesp.blogspot.com/2017/02/a-chemical-repackaging-business.html ) and had applied vinyl spackle to it to represent a stucco building. Progress to that point was shown in the post for Part 2 (you can see it at: http://modelingthesp.blogspot.com/2017/03/chemical-repackaging-part-2.html ).
Once the building had been airbrushed with Floquil “Earth,” I brush-painted the window frames and doors with a dark brown color similar to “Roof Brown.” I then painted all the sills and lintels of the door and window openings with Floquil “Concrete.” When a stucco building is painted, such parts may or may not be included in the painting, and I chose to show them as unpainted. This gave a fairly nice looking building, in my opinion. 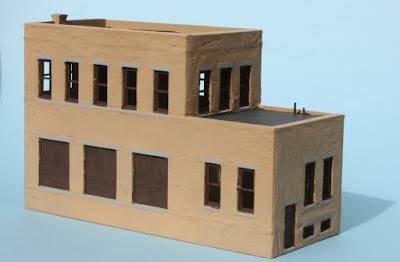 Next I wanted to add a sign for the business. Not every prototype business sports a highly visible sign, but on my layout I want operating crews to know exactly what they are doing, to the extent possible. Making industry identification unmistakable is one contribution to that.
After careful consideration, I decided to use an informal font for the company name, and chose to use Brush Script in a medium weight. The description of the work of the company was spelled out in News Gothic, bold. Laying this out in Adobe InDesign in an appropriate size, it was easy to make the type white and the background a medium blue. As I normally do with printing jobs like this, I went to my local copy shop which has a high-resolution color printer. Here is the resulting sign:

[Incidentally for those interested, I have discussed a few typography considerations like these in a number of previous posts in this blog (for example, here: http://modelingthesp.blogspot.com/2011/11/type-and-typography-on-layout.html ), and have also commented on the specific topic of signs for several structures on my layout (you can read that post at: http://modelingthesp.blogspot.com/2013/02/signs-for-structures.html ). And if you find those discussions interesting, you would probably enjoy my description of a visit to a phenomenal printing museum; that account is at this link: http://modelingthesp.blogspot.com/2012/02/type-and-typography-foundations.html .]
The sign was then cut out and attached with canopy glue. Here is the building, as developed up to this point, in its approximate arrangement on the layout at Ballard. I have added a rooftop tank, a resin piece from a Chooch tank set, resting in scale 4 x 12-inch timbers. I still need a few additional details to complete this structure, but this shows the present state. 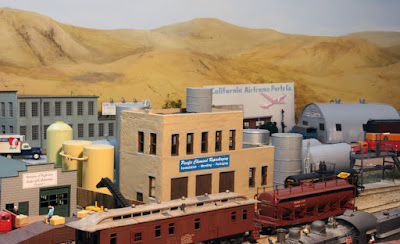 Note also the miscellaneous collection of storage tanks, deliberately differing in color. I have not yet made the final arrangements on those parts.
I now have an interesting industry in model form to accept inbound loads, especially from tank cars, and also to load outbound cars with a variety of products. Chemical repackaging is a versatile and wide-ranging type of business, which I think could serve the same purposes on many layouts. It also has the great modeling advantage that it need not be a massive industrial complex.
Tony Thompson
Posted by Tony Thompson at 9:56 AM