One of the most popular hopper car designs of all time was the USRA (United States Railroad Administration) design of the World War I era. About 22,000 of them were built under USRA auspices, and around 28,000 more were built in the 1920s, as copies or near copies of the original design.
Although the original design was durable, most of the cars received a range of upgrades over the years, from AB brakes replacing the original K brakes, and geared hand brakes replacing the original vertical-staff brakes, to new sides and new cast-steel trucks.
There have been lots of publications concerning the USRA hoppers and the later-era rebuilds, but among the helpful ones is a document by C.M. Smith, on the subject of the New York Central fleet of these cars (available on-line as a PDF at this address: https://nycshs.files.wordpress.com/2014/07/usranycshoppers.pdf ). Since NYC had one of the larger fleets of this car type, it’s an appropriate group to examine more closely.
Shown below is one of New York Central’s USRA hopper cars, this one acquired in 1920 after the end of federal control, and assigned to the Michigan Central subsidiary (NYC photo). You can see the three cross-braces inside which were a feature of the USRA design. Also evident are the drop-style grab irons and the lever-type handbrake. Eventually NYC would own over 13,200 cars like this. 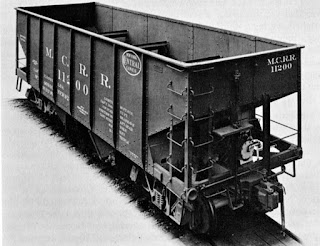 In the late 1920s, New York Central performed various upgrades of its own, in addition to the brake gear changes mentioned above. One distinctive change was replacement of the three cross-braces of the original design, with triangular braces on the cross-ridge at car center. The photo below shows what this looked like (NYC photo), on an original USRA-design car with vertical-staff handbrake. 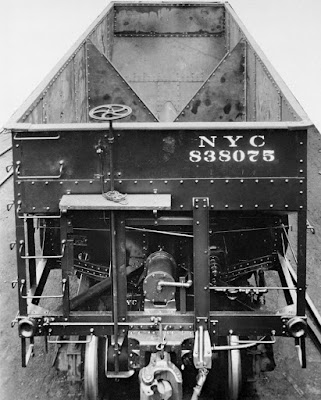 In later years, one of the most distinctive upgrades was replacement of worn or corroded side sheets with new pressed-panel sheets. These were dished so that the side sheet extended to the outside of the vertical side posts of the car. New York Central applied these side sheets to several different groups of cars, Almost 1800 cars of different ancestries in the NYC system were so converted.
The largest group converted, some 1419 cars, was converted in 1937 at the Central’s East Rochester shop from cars of the Pittsburgh & Lake Erie and its subsidiary, the Pittsburgh, McKeesport and Youghiogheny (PMcK&Y). These were renumbered as 37000–38418. One of these cars is shown below (NYC photo). 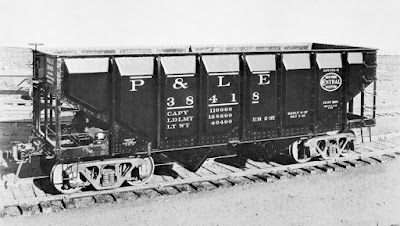 Among the NYC cars, perhaps the next biggest batch converted, after the P&LE cars, was a group of about 250 cars on the New York Central roster, renumbered after rebuilding into the series 416100–416599. Here is how the NYC cars looked when converted in 1933 (NYC photo). 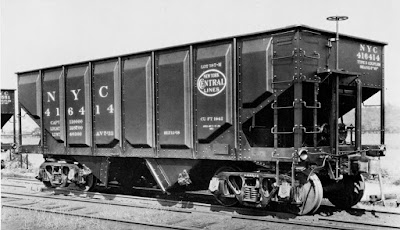 I wanted to model a car of this kind, and wanted to be able to see the dished-out panels on the inside of the car, not just on the outside. So when Tichy Models released an HO scale model, I began to think about getting one. But nothing had happened, until I came across one of the assembled Tichy cars in an auction. Painted silver and lettered for The Andersons grain company (mark AEX), I had no use for it in that form, but realized that I could re-detail and repaint for one of the panel-side cars from the New York Central fleet.
I began by adding the cross-ridge members inside, simply using 0.015-inch styrene sheet. This resulted in what is shown below (note the unpainted white member at car center).

The NYC painted its open-top cars boxcar red in my era, so I repainted this model into that color, airbrushing with Star Brand STR-30 “SP/UP Freight Car Red.” This is a nice paint to use, and covers well. Trucks were separately painted grimy black.

Next came lettering. I always enjoy applying decals or other lettering. Not only do they express some of my interests in type and typography, they bring the model to life (for me), and the model now acquires its personality and name. So this is something I look forward to.
But for this model, complications arose (which perhaps I should have foreseen), and the lettering became a challenge in several dimensions, including missteps. Thereby hangs a tale, and I will relate it in a forthcoming post.
Tony Thompson