The Class R-30-16 rebuilt refrigerator cars of Pacific Fruit Express were historically interesting, as they marked the introduction of steel panel roofs (termed the “solid steel roof” by PFE) for rebuilds, but retained the wood-sheathed sides and ends of earlier car designs. There has existed for some years a kit, no longer sold, by the late, great Terry Wegmann to model this car, using a roof, ends, and cross-bearers  molded in dies cut by Terry, and applied to a Red Caboose PFE car body. I did one of these models awhile back, and wrote a blog post describing the basic process (see it at: http://modelingthesp.blogspot.com/2011/08/small-modeling-project-pfe-r-30-16.html ).
My earlier model, in the post just cited, was built to represent the first time period of rebuilding that class, in which the cars’ original K brake systems were retained (this represented about the first 1200 cars out of 3554 total cars in the class, or less than 30 percent). But most of the cars were instead rebuilt with new AB brake systems. [This and related PFE history is thoroughly covered in the book, Pacific Fruit Express (2nd edition), Thompson, Church and Jones, Signature Press, 2000.] Once rebuilt, the AB-brake cars received new car numbers, PFE 74198–76554, and I wanted to build a car from that group.
In assembling the underframe part of the car, I simply substituted a Tichy AB brake set, located as on other PFE car classes of the time. This set of parts is very nicely molded, and I simply drilled holes for the attachment posts of the Tichy parts. The cylinder is lined up with the molded brake levers on the center sill cover plate.

In this photo, you can see the center sill and cross-bearers already installed.
The next component to be dealt with is the car body (a stock Red Caboose molding). As shown before (see link in top paragraph), the inner ends have to be cut down to clear the roof. This time I simply scribed and snapped the segment to be removed. Once that was done, I added weight inside the car body in the form of 5/8-inch steel nuts, close to one ounce each, with canopy glue. When completed, the body at this point looked like this: 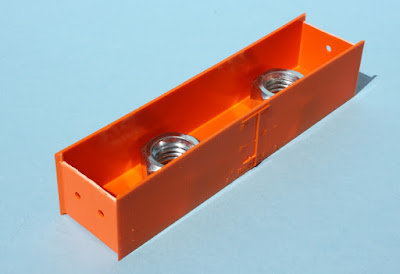 Next the interior needs to be painted flat black, both to reduce the translucent look of the molded orange plastic body, and also to permit the choice to model the ice hatches as latched open, so that only darkness would be visible in the car interior through the open hatch.
An alternative would be to paint the area under the hatches light gray, as the material lining the bunker was galvanized steel on the prototype, but since I don’t intend to do any interior detail or correct surface appearance inside the bunker, I will leave it black. The decision on open hatches will come later.
For this kind of job, I usually use a rattle can, such as Orchard Supply’s Black Primer. (As with any rattle can, I test first, to make sure it isn’t releasing “blorts” of paint.) 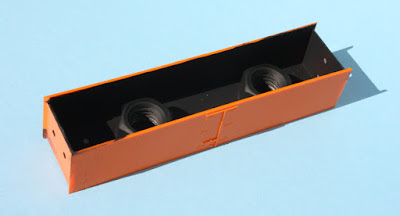 Note I masked the top of the sides, as this is a gluing surface for the roof.
In addition to the black interior, I know the car will look better if the sides are painted Daylight Orange (exactly the same as PFE Light Orange), rather than rely on the molded color of the body out of the box. Also, that way, I can paint the side grab irons, ladders, and sill steps orange at the same time, because I am going to apply the 1950 paint scheme that had all side hardware orange, except the edge of the steel side sill.
For this model, I used Star Brand No. STR-27, “S.P. / P.F.E. Daylight Orange” to airbrush these parts. This paint is an excellent match to SP’s Daylight Orange paint chip.
And by the way, keeping the assembled underframe separate to this point allowed me to achieve the needed black side sill, the original color of the model parts, without any masking. Adding that underframe to the car gave the result shown below. The sprue of sill steps is in the foreground. 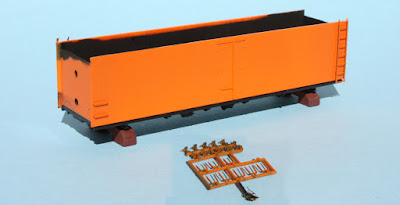 The model is supported here on what I have called “interim truck support blocks,” something I often use on kits in progress for ease of handling. I described these items in a previous post.If you are interested, you can see it at: https://modelingthesp.blogspot.com/2014/11/interim-truck-support-blocks.html .
The remainder of the kit work is largely following kit assembly directions. But a few little details will be worth describing in a future post, along with final lettering.
Tony Thompson
Posted by Tony Thompson at 11:56 AM