In the previous post, I described some of the background to the rebuilding of United States Railroad Administration (USRA) hopper cars on the New York Central system. I always liked the look of hoppers rebuilt with the pressed-out side panels, and although my layout only has occasion to host hopper cars from time to time, I wanted to have such a model. That first post is at this link: https://modelingthesp.blogspot.com/2019/04/a-panel-side-hopper-car.html .
In that prior post, I showed the painted but unlettered Tichy panel-side hopper car that I had acquired. I now had a small dilemma. The largest group of NYC System cars converted with panel sides was the P&LE set of 1419 cars (described in the previous post), thus the likeliest to be seen off-line. But partly because there is a good Tichy decal set for the NYC cars, I leaned toward making my car an NYC car. After all, NYC had several groups of these cars, one of them comprising 250 or so cars.
I went ahead and ordered Tichy decal set no. 10282. Its lettering is an excellent match to the 1933 appearance of the NYC panel-side car shown in the previous post. So before checking the history (no doubt you can see where this is going), I jumped in and decaled one side of my panel-side hopper.

This looks nice and I was enjoying how well it was turning out. Then, unfortunately (in one sense), I decided to check some background while waiting for the decals to be totally dry so I could do the other side of the model. I soon discovered some problems.
By 1940, these cars were being renumbered into the 832100–832599 series, and before the end of World War II, there were no more cars remaining in the 416000-series numbers. Not only that, but the distinctive, spaced-out initials and car numbers in the scheme shown on the model above had been superseded by a more conventional NYC lettering arrangement.
Obviously this means that the decals I had applied represented a scheme that was long gone by my 1953 modeling date. But being neither a NYC fan as such, nor much of a hopper car enthusiast, I considered whether I could simply ordain a modest time warp for these cars, so they could retain their 1930s car numbers and paint scheme. Reluctantly, I decided not to add to the many existing compromises already present on my layout by having a completely unhistorical paint scheme and number on this car.
Instead, I considered whether I should go with the P&LE option. For my 1953 era, P&LE is a better choice anyway; not only did the cars keep their as-rebuilt car numbers in the 37000–38418 range, but 1389 of them were still in service in 1953. By contrast, NYC was scrapping many of its USRA hoppers by 1953, including the panel-side ones. I hunted through my decal stash and came up with Champ set HN-19 for P&LE reporting marks.
The Tichy decal set could then be used for various capacity data and for its much superior car numerals. It also has a nice NYC emblem, though its lot number is wrong. But I used it. Here’s why. The Tichy decal lot number is 387-H, the correct lot for the cars when they were original USRA hoppers, but lot numbers in the 600s were applied when the panel side rebuilds were done. In cases like this, I adhere to one of Richard Hendrickson’s principles: the important thing is that some kind of lettering is visible above the NYC emblem. Few if any modelers will try to read lettering this small on a passing model.
Now I went ahead and painted out the reporting marks and car number that you see above, and replaced that lettering with the P&LE material from the Champ HN-19 set. 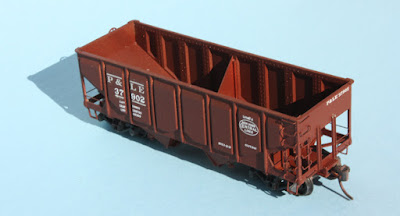 The fact that this is a hopper car, and would have experienced heavy use, means that it needs to be weathered fairly heavily. I will confess I stop my weathering short of making reporting marks and numbers impossible to read, since my models are used in operating sessions where their identity needs to be discoverable. But some cars do need to be fairly dirty. I have added paint patches for the reweigh and repacking lettering.

The removable coal load above is a homemade balsa block covered with real coal of “lump” coal size. Modelers often seem unaware that coal was shipped in several sizes, at least four fairly different sizes. Industrial, steam and metallurgical coal were all normally shipped as lump. But take a glance at the photo below, taken at Williamson, West Vierginia on the N&W in 1941 (Library of Congress). ’Nuf said. 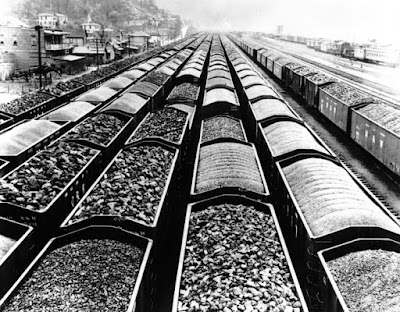 Anyone wanting to know much more about hopper cars, and for that matter about coal sizes and coal shipping, may wish to look into the late Bob Karig’s excellent 420-page book, Coal Cars (University of Scranton Press, Scranton, PA, 2007). The photo above is the frontispiece of the book.
My P&LE hopper car model is now ready to enter service on the layout, and will usually be carrying metallurgical coal, not only from the Pittsburgh Region but from other areas where met coal is mined and a P&LE hopper car might be confiscated for loading. I discussed in a blog post awhile back, the historical fact that eastern and midwestern met coal did come out to the West Coast in some circumstances, including strikes (see that post at: https://modelingthesp.blogspot.com/2016/06/coal-traffic-on-my-layout.html ), and obviously this P&LE hopper can represent part of such an event.
Tony Thompson
Posted by Tony Thompson at 12:43 PM