Coal traffic on my layout

Some while back, I wrote a series of posts, describing how I planned freight car acquisitions (or disposals) to arrive at a particular car fleet that I believed was suitable for my 1953 Southern Pacific layout. One post in that series was about hopper cars (see it at: http://modelingthesp.blogspot.com/2011/03/choosing-model-car-fleet-7-hoppers.html ), and I mentioned there that hopper-type cars in the Far West were more commonly ballast cars, not conventional cross-hopper coal cars.
But I also emphasized in that post that there was coal traffic in the Far West, even if quite small relative to most other parts of the country. Much of it, to be sure, moved in GS (General Service) or drop-bottom gondolas rather than cross-hoppers, as I discussed in another post in my rolling stock series (this one is at: http://modelingthesp.blogspot.com/2011/04/choosing-model-car-fleet-8-gondolas.html ). To illustrate, the photo below on my layout shows SP 2829 picking up an empty 46-foot D&RGW GS gondola from Jupiter Pump & Compressor (the model is a W&R Enterprises brass car) — more on what it’s doing there in a moment. 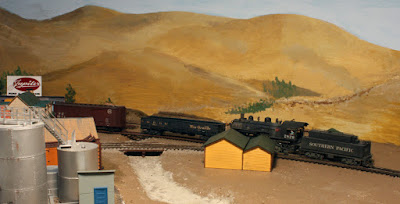 Coal was not a domestic fuel to any extent in California in the 1950s, nor was it used much for space heating purposes. But it certainly did find a number of uses. Coal and coke fuels were used to some degree in California in foundries and other industrial heating applications into the 1950s, and this largely came from the coal fields in eastern Utah/western Colorado. The originating railroads in that area were D&RGW, UP, and the Utah Coal Route. Although the bulk of that traffic moved in GS gondolas, certainly there were cross-hoppers in use also. In the early 1950s, D&RGW was beginning to buy conventional triple hoppers to supplement its fleet of GS gons.
Lastly, a small but significant use of coal was by the SP itself. During the 1950s, SP still relied on coal for fuel in section houses, depots, roundhouses and other on-line structures, as well as for use in caboose stoves. I need to model such deliveries, likely in GS gondolas. This latter point is straightforward modeling, because I already have both GS gondolas and some hoppers (D&RGW) for the local SP requirements.
Perhaps a more interesting challenge is the fuel for the cupola furnace in the foundry at Jupiter Pump & Compressor in my layout town of Ballard (you can see more about it at this link: http://modelingthesp.blogspot.com/2015/10/jupiter-pump-compressor-part-2.html ). This fuel should be either coke or “met coal” (meaning metallurgical quality) — both were widely used in California. I can of course deliver coal with the same GS gons or western hoppers used for SP domestic coal, but can also include occasional loads from sources farther east. Here’s why.
I have seen some intriguing documents relating to California coal and coke use during miners’ strikes in Utah/Colorado, with coal coming from the southern Illinois coal fields and even from the Pennsylvania/West Virginia/Virginia area. I can model these kinds of coal origins by occasionally operating C&O or WM or N&W hoppers, of which I have models; all three roads did have substantial off-road customers for coal, much of it marketed through fuel brokers. Here’s an example of such a car, photographed in the Santa Rosalia Local at Ballard, just clear of Nipomo Street, and awaiting delivery to Jupiter Pump and Compressor. 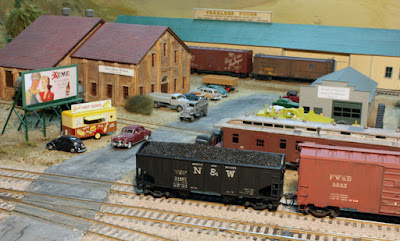 And because Jupiter has a plant switcher, my SP operating crews don’t have to match cars to their correct spots (the plant switcher will do that). They only need to set cars out on the Jupiter lead. I had originally planned to  have the local crew do this spotting, but the plant can obviously handle it, as well as putting cars back on the lead for SP pickup. That’s what you saw in the first photo of this post.
Why am I going into all this? Likely very few people have any interest in how or why my layout operates as it does. My point is to encourage you to try and understand your industries, your era, and your region, so that you know what happened commonly, and what happened rarely or never. You can of course choose to have any events you like on your layout, but finding out what would have happened in the area you model, at the time you model, is part of the fun for me, and you may find it fun too.
Tony Thompson
Posted by Tony Thompson at 10:41 AM