Modelers sometimes like to pile “junk” around buildings on the layout. That may be okay, since certainly there are plenty of instances in the prototype of piles of junk. But when it is done around a manufacturing facility, shop or roundhouse, or repair track of the transition era, I think it neglects the reality of how such facilities work. In fact, parts, even parts on the way to the discard pile, are usually stacked fairly neatly, and are segregated by type. New parts to be used, are almost certain to be neatly organized.
A good example I noticed recently was in a Jack Delano photo from December 1942, taken at C&NW’s Proviso yard in Chicago. It is from the Farm Security Administration (FSA) series before it was merged into the Office of War Information (OWI) during World War II, so it has an FSA control number in the Library of Congress collection (fsa1992000737/PP), but its Library of Congress series number, often more useful in finding photos on the LoC site (www.loc.gov) is LC-USW-36-721. The storage I’m interested in is in the foreground of the image; you can click to enlarge. 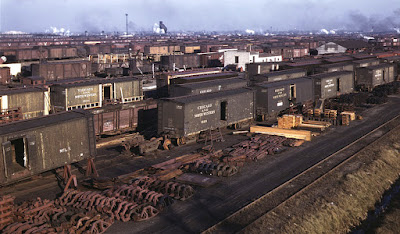 But maybe it is easier to examine the foreground part of the photograph if I show an enlargement, while also lightening the somewhat dark image. Now you can clearly see the neat stacks of sideframes.

These are  truck sideframes at left, alongside what is clearly a repair track, and between the sideframes and the lumber pile at right are some truck bolsters. The leftmost car on the repair track is up on stands, with its truck rolled out to the right, and you can see that both wheelsets have been removed from the truck for whatever servicing is being done on the truck. I have already discussed wheelset modeling in a previous post (you can view that post at: http://modelingthesp.blogspot.com/2016/04/truck-and-wheelset-modeling.html ).
First, note the state of the sideframes. They have an empty opening where the spring package and bolster would be located in an assembled truck. (Springs and spring packages were illustrated and discussed previously, at: http://modelingthesp.blogspot.com/2016/04/trucks-truck-springs-and-snubbers.html .) Most of these also have the journal box covers missing. It occurred to me that I could use a variety of old metal “sprung” trucks as a source of sideframes; many of my oldest trucks like that have experienced bolster failure due to what is called “Zamac disease,” in which the Zamac alloy swells and cracks with corrosion. Removing the springs and broken bolster gives you an open sideframe.

I wanted to include a stack of stored sideframes, and chose to align them on some planks (scale 2 x 8-inch size), and painted the frames a mostly rusty color. These are just glued into a stack with canopy cement. The planks keep the frames together, though in the prototype photo above, there does not appear to be anything under the sideframe stacks.

The prototype photo also shows some stored truck bolsters, obviously necessary if truck are to be re-assembled from the sideframe stacks. An obvious problem in using model truck bolsters, such as those that might have been removed from the model sideframes shown above, is the immense (relative to the prototype) center holes, for our equally immense truck screws. This does not really look much like a prototype bolster.

Prototype bolsters varied widely in design and shape, and certainly were different in different eras, from the earliest riveted steel bolsters at the end of the 19th century, to modern one-piece cast steel parts. But they almost always have a greater center depth, since they act as beams. Here is an example of an American Steel Foundries bolster of the late 1920s; this is an ASF photo from the 1928 volume of the Car Builders’ Cyclopedia.

The requirements for converting a model bolster, if it is anything like the model part shown above, are to remove the side bulges of the center hole, make new side pieces, and then cover the center hole on top with something which represents a center plate, with a 2-inch (scale) hole in  it for the kingpin. Sides and hole cover can be sheet styrene. Without going into detail, the bolster can then look like this:

These elements, sideframes and bolsters, can serve to model the kinds of stacks of parts that you see in the prototype photos at the head of this post. If you model a roundhouse or shop, or a repair track, or even a material car in a wreck train, you may wish to duplicate some of what I’ve shown here.
Tony Thompson

Posted by Tony Thompson at 9:58 AM