I hosted a couple of operating sessions at the beginning of May and of June, much of the action comprising the usual mix of freight car movements, but emphasizing seasonal crops (for more on that point, see the post at: http://modelingthesp.blogspot.com/2015/09/seasonality-of-crops-and-traffic.html  ). I also included express reefer movements for the early cherry crop in May, and early apricots in June, as I had done in an earlier session also (for that session, see: http://modelingthesp.blogspot.com/2016/03/first-2016-operating-session.html ).
The first of these sessions went well in some regards, and I know the crews had fun doing the switching. Here is just one photo from the May session, showing Jim Providenza (left) and Harry Wong sorting cars at Shumala. 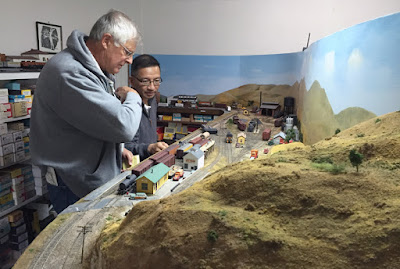 The second crew was Paul Weiss and Andy Schnur, for whom I didn’t get a good photo. Paul’s friend Hans Kurdi was also along, and participated in the session as a novice operator.
The less positive part of the session was a series of electrical problems, culminating in a persistent short we couldn’t find, and a “reluctance” on the part of the circuit breakers to re-set. I will say more about this problem, and a solution to it, in a future post, but during the session, it did create a stoppage in the action.
In June, a second session with a similar script was conducted. Part of the reason for it was to host Paul Hobbs, visiting from New Zealand. Here is Paul (left), working with Ray DeBlieck at Shumala. 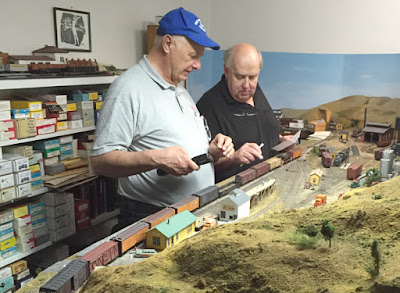 Paul found a number of aspects of my operating scheme different from his experience, particularly the waybills, so his comments were very interesting to hear. Paul is a frequent visitor to the U.S. and has operated on lots of layouts, so that kind of insight was instructive.
The second crew for this session was Ken Harrison and Ed Slintak. Ken, like Ray, an East Bay Club member for many years, had not operated here before. He too found the waybills an interesting part of the operating scheme. Here he is the conductor at Ballard, while Ed (at right) is acting as engineer on the Santa Rosalia Local. 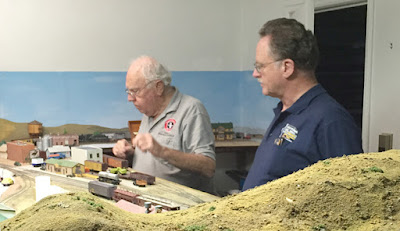 As almost always happens, each crew finds new wrinkles in how to do the various tasks in the session, and part of the pleasure I have in observing each session is to see the sequence and logic of the work each crew does. Usually everybody has a good time, too, and it’s nice to be able to host such a session. As I sometimes say to layout owners who don’t have operating sessions, you are definitely missing something, and it’s something I bet you would enjoy.
Tony Thompson
Posted by Tony Thompson at 12:15 PM