Recently I posted a reflection on the modeling of trucks and wheelsets (at: http://modelingthesp.blogspot.com/2016/04/truck-and-wheelset-modeling.html ). My goal was to create a work area near my roundhouse wheel track (portrayed in the post just cited) for workmen to change out wheelsets or do other needed work on car trucks. The photo below is repeated from that previous post, showing the wheel track at that point in its development, surrounded by dirt. 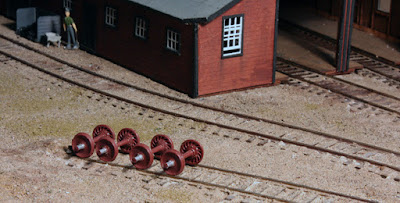 There are photographs I’ve seen of work on wheelsets being done with dirt surfaces around the work area, but obviously it would be far easier to roll a 2000-pound wheelset onto or off the rails with a hard surface, such as asphalt or concrete. I decided to make a small concrete pad next to my wheel track. I cut a piece of styrene sheet to an approximate shape to fit alongside the wheel track, then scribed it into rough squares.

The next step is for this styrene piece to be faired into the layout surface contour with paper mache. Here it is, as installed, with a stack of sideframes at left. 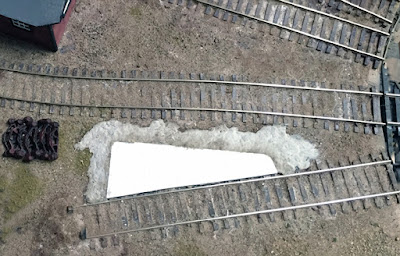 I painted the paper mache area you see above with my usual Rust-Oleum “Nutmeg” ground color, then sprinkled it with real dirt and scenic materials. The pad surface was painted with Floquil Concrete, and dirtied up a bit. As freshly scenicked, it looked like this: 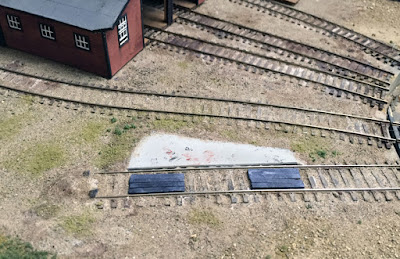 The ties between the rails are to help workmen who need to roll a wheelset off or onto the rails. One could also, of course, just extend the concrete between the rails and even to the far side, if desired.
Here is the work area as it now exists, with a couple of wheelsets in the picture. Both are Tichy wheelsets, but the one at left has only journals painted silver (a new wheelset, not yet used), with the reddish Tichy plastic darkened a bit with Burnt Umber. The wheelset at right represents one that has been in service, so has wheel treads silver also. Inside faces of wheels, and the axle, are a dirtier color than the new wheelset, and outside faces of wheels are dark, oily dirt, for which something like Grimy Black or equivalent works for me. There are a couple of brake beams on the pad. 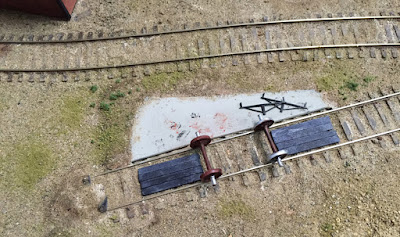 I now need to add workmen, various tools, etc. but for now, the wheelset work area is coming along the way I want it to look.
Tony Thompson
Posted by Tony Thompson at 11:04 AM