Because I model the Southern Pacific in 1953, I operate a considerable number of Pacific Fruit Express refrigerator cars, and it happens that 1953 was at the culmination of a series of small but evident changes in PFE car lettering. I need to reflect those changes in the variety of paint and lettering schemes on my PFE models.
There are two different issues involved with portraying PFE paint schemes. One is the question of how many cars with a particular paint scheme would be in service in 1953, something for which there can be no exact answer but which can be answered in a general way. The second question is what exactly were those paint schemes and the dates they were applied.
I summarized all this information in the PFE book (Pacific Fruit Express, 2nd edition, Thompson, Church and Jones, Signature Press, 2000), but recently have been examining the information in much more detail. The reason is the forthcoming book from the Southern Pacific Historical & Technical Society, entitled Southern Pacific Freight Car Painting and Lettering Guide, which includes PFE. I have written the SP part, Dick Harley has written the PFE part, and of course I have cooperated with Dick on his part. The book should be published this fall.
So what’s the modeling problem? I will start with accurate schemes. After World War II, there was a change to PFE paint and lettering almost yearly from 1948 to 1953, and individual models ought to reflect one and only one of these at a time. A number of ready-to-run models, which naturally are assumed to be correct, have not been correct. Here is a single example, which happens to be an InterMountain model, though InterMountain are certainly not the only offenders; this is just an illustration. 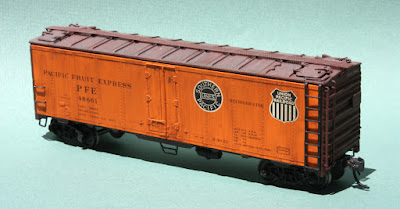 The model has black ladders and grab irons, but orange door hinges and latch bar. There was no such PFE paint scheme. When side hardware became all-orange during 1948, it included grabs and ladders, as well as corner sill steps. The model also has black-white UP medallions, introduced in 1950, and on each car side, the SP medallion is toward the B or brake end, a change made in 1951, by which time the side sill and center sill step had also become orange. This particular model is not so hard to correct; I will simply paint the offending black parts with Daylight Orange.
There are additional aspects of this particular model which I will return to in future posts, and I will also show the corrected model at that time.
For an example of the 1948 scheme correctly rendered, this photo of plywood-side Class R-40-24 shows the features of that scheme: color UP medallion, SP medallions still alongside the car door on both sides of the car, but all side hardware and corner sill steps orange. This is an upgraded Athearn model. The decals are a previous-generation Microscale product, with SP medallion taller than the UP medallion, but the prototype medallions were the same size, each 45 inches high.

In June of 1950, the color UP medallions were changed to black and white, as mentioned above. These are easy to recognize, even in a black-and-white photo, because the word “Railroad” was added in the upper field.  Here is a good example of that 1950 scheme, on Class R-30-9 car PFE 98444 (George Sisk photo, from the Charles Winters collection — this photo is in the PFE book). The distinctive orange corner sill steps are evident, UP medallion is black-white, and the SP medallion is next to the door, toward the A end. 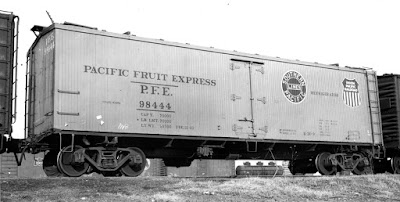 Here is a model example of the 1950 paint scheme shown above on PFE 98444. This Class R-30-9 model is a Red Caboose product, and the corner sill steps were not painted orange in the original kit; that detail has been added in preparing the model for service.

These examples will suffice to show that there are readily identifiable details of the 1948 and 1950 paint schemes which are easy to duplicate in model form or, if necessary, can be achieved by correcting commercial paint and lettering. With these examples in mind, I will continue to more details of these and succeeding paint schemes in a following post.
Tony Thompson