The annual RPM (Railroad Prototype Modelers) event in the San Francisco Bay Area is called BAPM (Bay Area Prototype Modelers) and was held this year on June 18, at the same private school site in Richmond where we have met for several years. As usual, the turnout of modelers was good and the standard of models displayed was really excellent, I would say better than most years. There were also three talks, notably Dave Maffei doing an excellent presentation on SP beet car modeling. But let’s go back to the display room.
Always among the most interesting display models are the “in-progress” examples, where modifications and additional details have been added, but the model is unpainted (and may still need additional detailing). In such a model, one can really see the modeler’s work and understand the process of creation. Here is just one good example, a Geep by Brian Hicks:

I personally always like to see layout design ideas, even if this is not the core of the RPM concept. Vince Vargas showed a neatly constructed mock-up of his layout, which is under construction. As you can see, it will ultimately have three levels. Each level is separate and can be lifted out to reveal its details or those on the level below. In the foreground, Vince showed some of his complex trackwork, being built with Fast Tracks fixtures (see their products at: http://www.handlaidtrack.com/ ).. 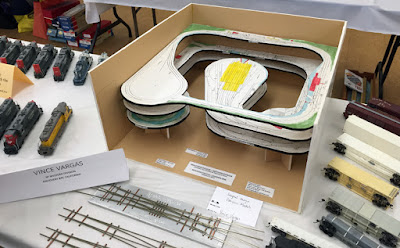 At BAPM, we normally have a number of vendors, and it’s quite interesting when they bring a variety of wares, along with announcements of forthcoming products. One who made a trip to attend was Ross Dando, of Twin Star Cars, mostly Rock Island products but with some other material too (visit them at: http://www.twinstarcars.com/ ). I really liked (and have already used) Ross’s castings for Chrysler trucks, as I showed in a prior post ( http://modelingthesp.blogspot.com/2016/02/pfe-40-foot-express-cars-part-2-trucks.html ). 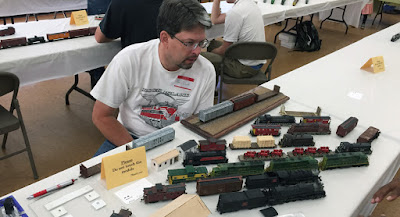 Another frequent vendor at BAPM is Cannon & Company, with proprietor Dave Hussey showing off a number of their current products. Cannon is known for superb diesel detail parts, but Dave is adding a number of outstanding freight car models. You can see them under “What’s Coming” on their website, which is at: http://www.cannonandco.net/ . 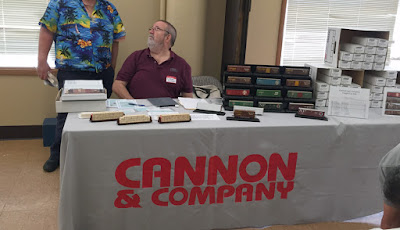 Last but hardly least was Jason Hill of Owl Mountain Models, showing pre-production samples of forthcoming “Harriman” flat cars for both SP and UP. Jason plans three kits, one for the “late” cars of SP classes F-50-10 and -12, an example of which is shown below. He also plans to do the “middle” cars of SP classes F-50-5,-8 and -9, along with the original cars with Bettendorf underframes, Class F-50-4. You can check on the status of these at their site ( http://owlmtmodels.com/ ). 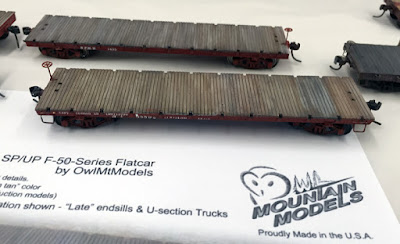 One of the modern models I most admired at this edition of BAPM was a tank car by Scott Bates, with a rusty upper body that was just brilliantly rendered. Great finishing, Scott.

Last year I showed the nice Richmond Pacific locomotive models by young modeler Jonathan Izen (that post can be accessed at this link: http://modelingthesp.blogspot.com/2015/06/bay-area-prototype-modelers-2015.html ). He was back this year with a terrific kitbashed National Railway Equipment Gen-Set, This is the prototype Richmond Pacific’s 2015, rebuilt from an Illinois Central GP9. Seen below are a photograph of the model before painting, and the final product at right. You can click on the image to enlarge it.

As always at these local RPM meetings, a great day of fun was had by all. It is always fascinating to see the array of models displayed, of which I could show here only a small fraction. There is a lot of sharing of modeling ideas and approaches, a lot of admiring each other‘s work, and great talks to punctuate the day. I look forward to each year’s BAPM, and I would urge you to try one of these local RPM meets, if you don’t already do so.
Tony Thompson
Posted by Tony Thompson at 12:44 PM