Awhile back, I wrote a post to point out some of my own favorite sources of informative railroad stories, stories from which I learned something about prototype operations and work. That post can be found at this link: http://modelingthesp.blogspot.com/2012/06/railroad-stories.html . In the present post, I want to add a few more titles to this, and mention again the one that is still my favorite.
I mentioned Dan Rehwalt’s series of very interesting and readable books about railroad work. Probably the best, because it is about all the brakeman’s work on a local freight, is Westsider (Grizzly Press, 2004). The title refers to a local out of Portland, Oregon on the SP’s Westside line, and every page has insights into how those jobs were done.  It’s worth finding on-line, used or new. 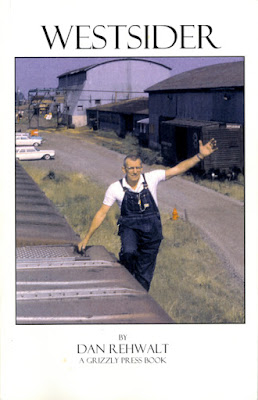 I know in the previous post I mentioned Linda Niemann’s book, Boomer (University of California Press, 1990), though I didn't say much about it. But it is as gritty and realistic as story about learning to be a brakeman (or perhaps, brakeperson), even if it is also a rough-edged story about her battle with alcohol and personal self-esteem while working on the railroad. But it’s a great read for the railroad content, even if the other parts may not be to your taste. It’s available in trade paperback. 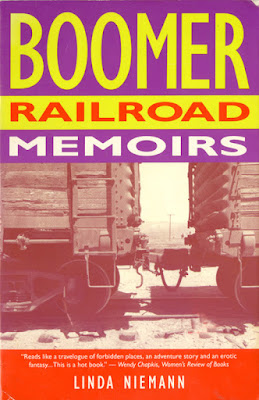 I recently re-read Set Up Running (Pennsylvania State University Press, 2001), a story about  engineman Oscar Orr’s career on the Pennsylvania, and though I’m not particularly a fan of Pennsy steam, it is a vivid and engrossing set of stories. If I had to make any criticism of the book, it’s the son John relating his dad’s stories, so a little second-hand, but the stories are all interesting and informative.
I should definitely mention Bill Knapke’s classic The Railroad Caboose (Golden West, 1968), though for me the book’s stories of railroad work are badly diluted by an effort to provide a wide-ranging history of cabooses, and lots of examples of odd or unusual caboose uses or experiences. Still, there is good stuff there. 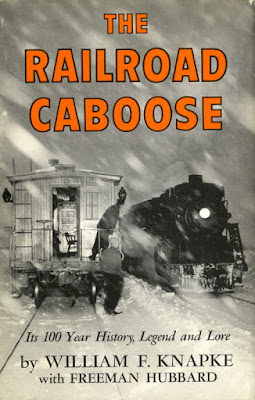 Last, I have to say it again. Head and shoulders above all the books just listed, and above any others I know, is Ralph Fisher’s Vanishing Markers (Stephen Greene Press, 1976), especially Chapter 8. I showed the dust jacket in the previous post on this topic, so here I’ll show the title page. Just a great book. I don’t know how many times I have re-read Chapter 8 (just did last night for the ump-teenth time), and it’s just as fresh, interesting, and enjoyable every time. I can’t recommend it highly enough. 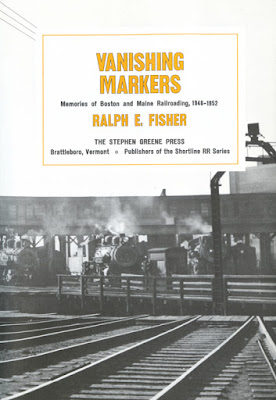 Well, these are all books I’ve found instructive as well as fun to read. All are available used from internet booksellers, so are relatively easy to obtain, if you want your own copy. Your local library may have some of them too, and if not, can often get them via inter-library load, so you’re not obliged to buy them. But do try and get a chance to read them.
Tony Thompson
Posted by Tony Thompson at 8:59 AM