A month or so ago, I posted a description of how prototype truck springs are arranged, and some of the challenges we have with our models in reproducing those arrangements (you can read that discussion at: http://modelingthesp.blogspot.com/2016/04/trucks-truck-springs-and-snubbers.html ). In that post, I showed a photo of a model truck with “real springs” and mentioned that these springs in HO scale are far too thin, and permit us to look right through the spring group, a highly unprototypical experience. Here is another example.

I also mentioned in passing that my late friend, Richard Hendrickson, had experimented with putting a kind of “view block” behind such springs, so that even though the springs were way too thin, at least you couldn’t see through them. It occurred to me that it might be useful to show an example of how he did this.
One of his models was of an Erie gondola, the prototype of which had one-level Dalman trucks. Many modelers are familiar with the two-level Dalman truck, with its distinctive stepped height of the spring groups (American Steel Foundries photo):

There are superb HO scale versions of this truck available from Tahoe Model Works.
But there was also a one-level Dalman design, which had all the extra spring groups of the two-level truck, but without the stepped bottom support (Richard Hendrickson collection):

I hardly need to emphasize how different these prototype spring groups look, compared to the model photo at the top of this post.
As I mentioned above, Richard was modeling an Erie gondola. It was from the 14500–14949 series, built by Greenville in 1930, and it had these one-level Dalmans. The only model truck he could find of that kind was a brass truck, unfortunately with the “see-through” springs. He used a strip of 0.010-inch styrene sheet, glued behind the spring opening, to improve the look of these trucks. This strip is visible on the far side of the truck, on the inside of the sideframe. You can click on the image to enlarge it. 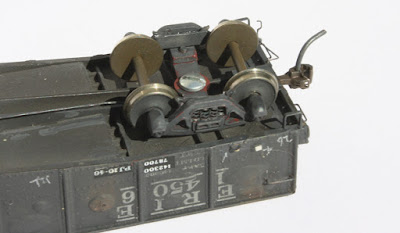 Note also in this photo the color Richard liked to use for wheel backs and axles.
At one time, Richard also tried cutting a styrene piece to fit into the back of the spring opening in the sideframe, so that nothing would extend behind the back of the sideframe. It is fussy to fit a small piece like that, and he only did it once. But the use of a backing strip, as shown above, is much easier. There were several examples of this approach among his freight car models.
Having shown above the truck modification for this model, I should also show the complete model, right side up. Here it is.

If you too have sprung trucks for which there is no good solid-sideframe replacement, or you just don’t want to have to replace the sprung truck, this “view block” technique is one easy way to make those trucks look better.
Tony Thompson
Posted by Tony Thompson at 11:25 AM