In previous posts, I have explored many aspects of what waybills are and how they are used, always with the goal of informing model operations. Many of these prior posts can be found by using the word "Waybills" as a search term in the search box at the right. If you have particular interests within this topic, add one or more appropriate words to the search term you use.
The present post goes back to a very basic point, and one about which I am often asked: how does a model waybill get filled out? It was stimulated in particular by a recent layout visitor, who shall remain nameless, and who phrased it this way: “How do you dream up these waybills?” Overcoming  a faint instinct of outrage at the word “dream,” I realized he really meant to ask, “where does the information come from?” That’s certainly a legitimate question.
The first issue to recognize is that of how cars are chosen for loading. Modelers often imagine all on-line loading to be in home-road cars. If this had been done on the prototype, obviously half of all car miles would have been empty car-miles, since all arriving foreign cars would be unloaded and sent home empty, while home-road cars were loaded exclusively. It was to reduce this problem that Car Service Rule 1 was written to say, in essence: “Do not load a home-line car if suitable foreign car is available or can reasonably be obtained.”
(For a full quotation of all six of the primary Car Service Rules, along with the necessary map of destination zones, you may wish to read my post at: https://modelingthesp.blogspot.com/2011/09/waybills-12.html . But do we need to try and follow these Rules? In the decade after World War II, AAR data showed that around 70 percent of all carloadings did follow the Rules, so it seems to me that we should strive to do the same.)
Thus, if you model, say, Seattle and are envisioning a load arriving from somewhere in Ohio, you might think it would surely be carried in a local railroad’s car, the New York Central or Erie or perhaps the B&O. But in fact that yardmaster in Ohio would have Rule 1 in mind, and would prefer to put that Seattle-bound load into a car of a northwestern road, say Milwaukee, NP or GN, or even a railroad with nearby connections such as SP or UP.
So if you are choosing a load of Ohio origin, say automobile tires from Akron, how do you go  about it? First, you  need to know which railroads served Akron, so that you can choose a blank waybill for one of those railroads. I like to use the Kalmbach-reprinted 1928 “Railroad Atlas” that I described in a previous post (see it at: https://modelingthesp.blogspot.com/2012/05/waybills-24-routing.html ).
In the Ohio map in that book, you will discover that Akron was served by the Erie, Pennsylvania, B&O, and of course the Akron, Canton and Youngstown. I have blank waybills for all four. But I like to check at this point about specific industries and whether there was a switching district. I do have the Pennsylvania Railroad “List of Stations and Sidings,” effectively a Shippers Guide, reprinted by Rails Unlimited (see their website at: http://railsunlimited.ribbonrail.com/Books/shippers.html ). That document shows that both B.F. Goodrich and Firestone each had two plants served by the PRR. So one option is a PRR waybill for that load of auto tires.
As it happens, B.F. Goodrich maintained a warehouse in Seattle, served by the NP. That information comes from the Great Northern Shipper Guide, also from Rails Unlimited. So that’s a logical destination for a carload of auto tires. We could well use an AC&Y waybill for an  interesting look, but I think the PRR choice makes sense too.
Next let’s imagine that you have a freight car needing work in your yard or in staging, such as the car shown below. This would be a good fit to the waybill we are designing, that is, to load the shipment of tires into this Union Pacific car. That is true, even though the routing will not take the car via UP (Car Service Rule 2), because the empty can readily be returned to UP in the Seattle area. 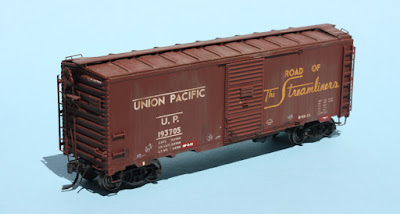 Another interesting aspect is routing. This is potentially a very complex and sometimes arcane topic, but I simplify the problem by choosing a direct route via major railroad lines (which are indicated in the 1928 Atlas). Putting all this together, we might arrive at something like the following: 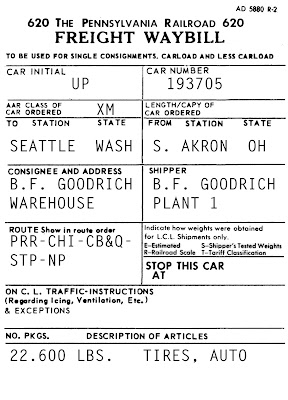 My blank waybills are Photoshop tiff files, and they are filled out using the Type tool in Photoshop.
There are of course many options that go into a final result like the above waybill, as I have tried to indicate in describing the preparation process, but few of them are “wrong” and the modeler can, within limits, please his or her personal preferences. Obviously a great many railroad car ownerships could be chosen in place of the UP car in this bill, and other routings could be chosen. And as indicated, one of the other railroads serving Akron could be the source of the blank waybill.
You may notice in particular that I used two Shipper Guides in this process. I have copies of these most helpful documents for 12 railroads, most of them obtained from Rails Unlimited. There are other sources of information about industries in different locations, but I find these the most convenient. The real point is seek out and use such information for waybill purposes.
This post describes a fairly typical example of the process by which I make up my waybills. The information sources are ones that are readily available to anyone who wishes to follow a similar process, and the guiding principles, such as Car Service Rules, are well documented. But I should emphasize that no “dreaming” need be involved.
Tony Thompson
Posted by Tony Thompson at 10:11 AM