This post continues a description of building a Terry Wegmann / Red Caboose kit for PFE’s Class R-30-16 rebuilt refrigerator cars. The previous post presented the early steps to construct one of these kits, with some particular goals in mind for the completed model (you can read it at: https://modelingthesp.blogspot.com/2019/04/building-another-pfe-class-r-30-16.html ).
The R-30-16 class is very interesting historically, as the first of the PFE rebuild classes in which the superstructure was steel-framed, though retaining wood sheathing on the outside. It also was the first rebuilt class with a “solid steel roof” (the PFE term), which is the vital addition that Terry Wegmann created for this kit. And finally, with 3554 cars in the class, it is not only ne of the larger PFE rebuild classes, but a survivor too, with 3400 cars still in service in January 1953. Since I model 1953, it was essential for me to add another model of this class, as I mentioned in the prior post.
In the previous post (link provided in the first paragraph of the present post), the car body had been assembled and painted Daylight Orange. I now built up all the details on the kit ends. One thing to choose here is what kind of handbrake would be used. On its rebuilds, PFE often used Equipco power handbrakes, though not always. Shown below is an E.R. Mohr photo of two PFE cars at Salinas, California in 1958 or 1959, with the nearer car being a member of Class R-30-16 and providing a good view of its Equipco hand brake. (You can click on this image to enlarge it if you wish.) 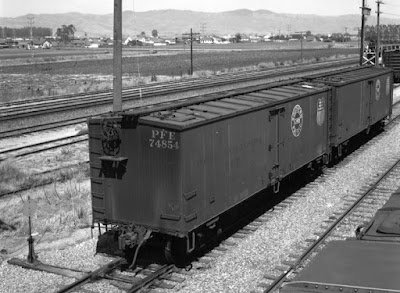 Note, incidentally, that after PFE ceased washing its cars in the early 1950s, that they became rather dirty in a few years. Show this photo to anyone who thinks your weathering is “overdone.”
Modeling this handbrake well is easy today, because we have the superb Kadee rendition of this brake wheel in HO scale. Below is my kit end with details added, including the Kadee hand wheel. 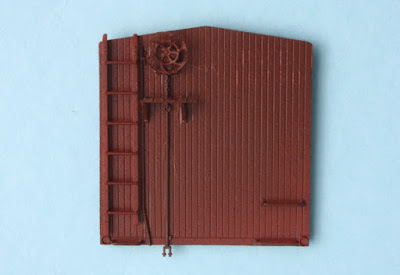 I also decided to letter the car body while it was still unassembled. This is a particular advantage for car ends, because the separate end can be laid down flat on the workbench (as you see it above), instead of having to stand the car model on its end to apply decals.
I next turned my attention to the roof filler strips at the ends. The stock Wegmann roof leaves a gap at the top of the car end, which has to be filled. The kit contains a piece of 0.040 x 0.080-inch styrene strip. My previous experience is that the gap may not be exactly this size, as I mentioned in describing a previous R-30-16 build (you can see that description at: http://modelingthesp.blogspot.com/2011/08/small-modeling-project-pfe-r-30-16.html ). In that previous build, I filed the roof so that the 0.040 x 0.080 strip would fit at both ends. In the present build, I used the 0.040 x 0.080 strip at one end, and two pieces of 0.015 x 0.080 strip at the other — in other words, the gap at that end was actually 0.030 x 0.080 inches.
With the body in its correct Daylight Orange color, it was time for decals. True to the comments I made recently about PFE lettering (you can read post at this link: https://modelingthesp.blogspot.com/2019/04/small-rant-manufacturer-lettering.html ), I used Microscale set 87-501 in the current version with Dick Harley’s excellent, recent artwork upgrading this set from older versions.

The 7-inch end lettering was applied, as it was still standard for wood-sheathed cars with wood ends in 1950.
In the photo above, the fully lettered car is still on its interim truck support blocks but is otherwise ready to be weathered (I weather truck sideframes at the same time as the rest of the model). When first rebuilt, this class of cars largely retained their original T-section trucks, but as deadlines approached to remove these from service, more and more PFE cars got conventional AAR trucks. My model was equipped that way.
All that really remains at this point is to weather the car, add some suitable chalk marks and route cards, and make a fresh paint patch where the reweigh data can be placed. Here is the result of those steps, pictured alongside the loading dock of the Guadalupe Fruit Company in my layout town of Ballard. (You can click on the image to enlarge it if you wish.) 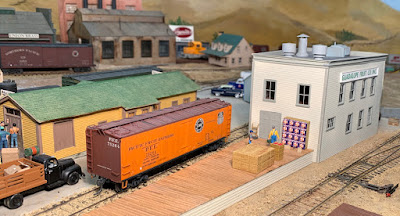 I now have two model PFE cars representing the 3554 cars of Class R-30-16. That’s a good start, but still falls short of my goal of having one model PFE car for every 1000 cars in the prototype PFE car fleet. Luckily I have one more of the Wegmann / Red Caboose car kits for this class, and one of these days, I will add that third -16 car to my fleet.
Tony Thompson
Posted by Tony Thompson at 10:27 AM