A month or so ago, I hosted three operating sessions on my layout for the San Francisco Bay Area operating weekend, BayRails VIII (I described some of the aspects of those sessions in a previous post, which can be found at: https://modelingthesp.blogspot.com/2019/03/my-sessions-at-bayrails-this-year.html ).
I had introduced a number of new details in my sessions for BayRails, and naturally discovered also some problems, and wanted to follow up with session changes to reflect lessons learned. The perfect occasion was a visit by New Zealander Paul Hobbs and Canadian Greg Madsen, for whom I arranged a session on April 29. I added a preliminary session on April 28.
As I had hoped they would, the sessions ran smoothly with the BayRails additions. One of my Frog Juicers had a loose wire, causing intermittent problems, but of course readily fixed — after the session. Otherwise, what I had designed for the operating patterns worked.
Shown below are Paul (at left) and Greg, working in this photo at Ballard on my layout. At this point, Greg was the conductor and was managing the waybills for the local switching, while Paul was engineer. 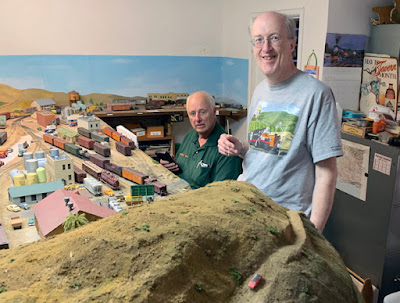 The two local operators who filled out the crew of four were Jim Radkey and Chuck Hakkarinen, whom you see below at Shumala. At this point, Jim (at left) was the conductor and Chuck was acting as engineer, as they organized the switching work before the arrival of the Guadalupe Local to exchange blocks of cars to and from the branch. 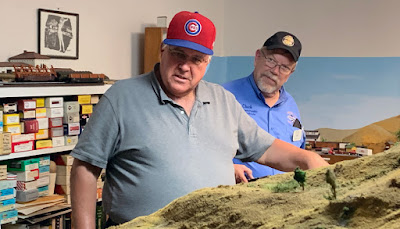 This was the 48th session on the current version of this layout, and overall it went well. The corrections I made to the operating patterns after BayRails worked as I wanted them to, and most important of all, the visiting operators had a good time. That’s what it’s all about, for my money.
Tony Thompson
Posted by Tony Thompson at 9:30 AM