I have modified a fair number of Athearn "Blue Box” tank cars over the years, both the ordinary type with a single dome (but which I raised in height to make it prototypical — see for example my post about SP cars at this link: https://modelingthesp.blogspot.com/2011/05/modeling-sp-tank-cars.html ) and the “chemical” tank, as Athearn calls it, the insulated high-pressure car.
These models are an artifact of an earlier era, and cry out for lots of upgrades, many of which I’ve made. But in the present post, I am only discussing one aspect of these cars. The Achilles heel of these models for operation is the coupler box arrangement. It often develops into “coupler droop,” not at all good for operation.
Let me begin with the underframe itself. This is probably familiar to most modelers, a two-part design in which the cover plate, as we may call it (the upper part in the photo), mates with the main frame (lower part) and, among other things, forms the couple box lids at each end. The ends of the cover plate are a friction fit between the support braces at the car end, which is the source of the problem. That friction is not always maintained over time. 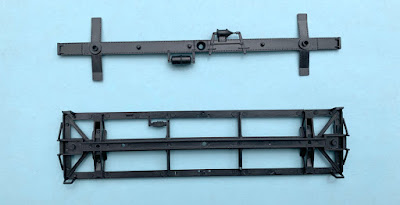 What is needed is a positive closure to the coupler box lid, so that it maintains its location, and also will also permit maintenance of the coupler, if needed.
Below is a close-up of the coupler box when built as Athearn intends (though with a Kadee coupler). When new, this arrangement usually works fine. It is what develops over time that becomes a problem. 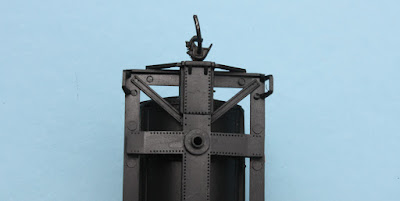 Doubtless there are many solutions to this problem, including installation of a completely new coupler box to fit the chosen brand of new coupler. My choice is to fix the Athearn box. First, I use a razor saw to saw through the cover plate, somewhere between the car’s body bolster, and the back of the rivet row which “defines” a coupler box. That gives me a separate box cover.
Next, I carefully center punch (or scriber indent) the center of the coupler post in the box, and drill it out. Usually I drill it No. 75, then follow with a No. 51 drill, and tap 2-56. This gives me the threaded hole that will accept the future screw closure.

Note here that you can see right through the drilled and tapped hole, and the tank handrail is in fact just visible through the hole. The Kadee spring is in place here also.
Next, I drill the now-separate coupler box lid with a hole for a 2-56 screw. The hole center, of course, must be located first. There are two ways to do this. One is to use an existing drilled box lid, and just use it as a template. But how do you create the first one?
That’s the second way to locate the hole. I disassemble the model and remove the underframe from the car, after drilling the coupler post as described above. Then placing the coupler box lid in its normal position in the frame, I drill down through it No. 51 from the top, that is, from the top of the frame as seen on an upright car. Then the hole can be enlarged to a No. 42 clearance drill with the cover away from the frame, or it can be left as No. 51 and tapped 2-56 so that the closure screw holds everything together. Either method seems to work.
I then reassemble the coupler, the box lid, and a 2-56 screw closure, and paint the screw head black or dark gray or whatever color suits the model. When all this is finished, the only clues to the change are the screw head, of course, and the saw cut where the box lid was separated from the rest of the cover plate. That cut is just visible here as a dark line between the rivet row at the back of the “box” and the bolster. 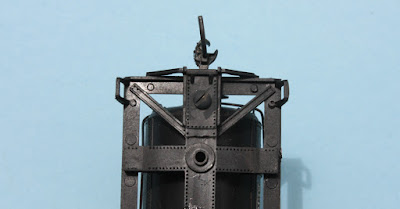 Nowadays I would do this conversion as part of any work on an Athearn “Blue Box” tank car. But back in the day, I didn’t always do this part of the project, and have had to go back to some of the older Athearn tanks in my fleet and fix them. But it’s worth the effort. The couplers then stay where they are supposed to be, and the cars operate as they should.
Tony Thompson
Posted by Tony Thompson at 11:00 AM