As most railfans and modelers must surely know by now, May 10 of this year was the 150th anniversary of the driving of the Golden Spike at Promontory Summit, Utah, completing the first transcontinental railroad. I attended the commemorative event as part of attending the Southern Pacific Historical & Technical Society’s 39th annual meeting in Ogden.
As always, it is a joy to be in the presence of the Wasatch Range, which looms over the Salt Lake Valley in dramatic fashion, especially in winter and spring when abundant snow caps the higher peaks. I love this kind of mountain presence, and when outdoors in this area, you can hardly turn your head without noticing the Wasatch. Here is a typical view in Ogden. 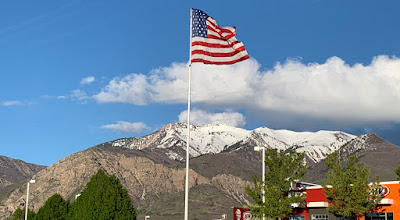 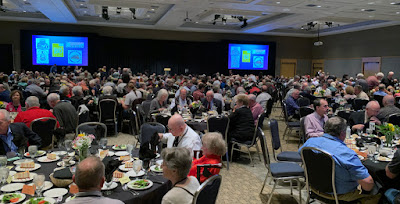 Note the large display screens. These were on both long walls of the room, permitting everyone to see the speakers, as well as keynoter John Gray’s slides during his talk.
I suppose the core event was indeed the commemoration at the National Historic Park site. As had been predicted, it was over 20,000 people. They arrived, we were told, in more than 1500 automobiles and 81 buses. The SPH&TS and UPHS had organized 12 buses to take our members to the site, so at least we didn’t have to drive in the traffic. Naturally, not being VIPs, we did not get particularly close to the reproduction locomotives and the re-enactment of the spike driving, but we sure got the flavor (they had display screens and a PA system). They even had a U.S. flag flying with the correct number of stars for 1869.

For many railfans, I’m sure the headline event was the arrival of newly restored UP 4014, the 4-8-8-4 nicknamed “Big Boy” from what was chalked on the smokebox of one engine at the Alco plant by an unknown workman. I rather liked the fact that the restored UP engine did carry this same chalked mark near the smokebox top (how it looked is known from a photo). You can click on the image to enlarge it if you wish. 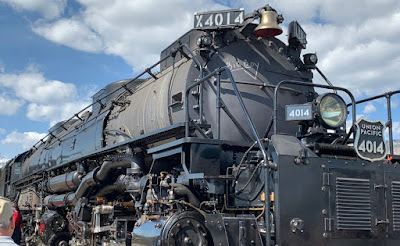 I was intrigued with the details of the restored locomotive, many of which are modern applicances instead of restoring only the classic technology of 80 years ago. An example is this air tank. 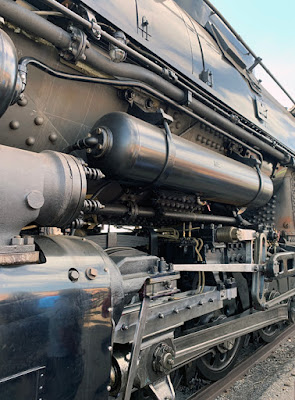 Also making a difference in the Ogden area was a street fair to mark the occasion of the 150th anniversary. The photo below, at the corner of Lincoln and historic 25th Street, is only a block from Union Station, location of the display of both the Big Boy and UP 844, plus the UP business train. There were crowds everywhere in this festival, which was fun to stroll through. 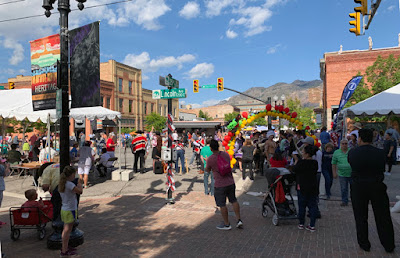 Finally, I always try, when I visit the Salt Lake area, to drop in at one of my favorite bookstores in the world, the King’s English (see their site at: www.kingsenglish.com ). Co-founder of the store, some 42 years ago, was Betsy Burton, and she has written a marvelous book about the store’s early days and the adventures of booksellers. If you like books, you would love this one. It’s readily available on line, in either hard cover or softbound. Here’s one link: https://www.biblio.com/the-kings-english-adventures-by-burton-betsy/work/2874633 . 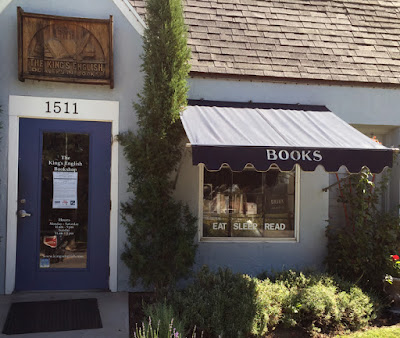 It was a wonderful five days, and I really enjoyed practically everything about it. A great combination of interesting and engrossing activities, with enjoyable spring weather and marvelous mountain views.
Tony Thompson
Posted by Tony Thompson at 10:20 AM