Some time back, I posted a description of both the prototype details of ice bunkers, and of open ice hatches on refrigerator cars, and also showed some examples of my modeling approaches (you can read that post at this link: https://modelingthesp.blogspot.com/2013/07/modeling-open-ice-hatches-on.html ). The present post is to show some refinements and extensions of that earlier post.
The first thing I want to emphasize is that ice hatches were part of a closure for the opening at the top of the ice bunker; that what modelers call the “ice hatch” is really just the hatch cover; and that this closure design included a plug. In earlier days, it was a separately hinged part, and when photographed, it was obvious that the hinges were located at slightly different places. This is quite visible in the view below, which shows PFE 91022, the first car of Class R-30-9 (PFE photo). You can click on the image to enlarge it if you wish. 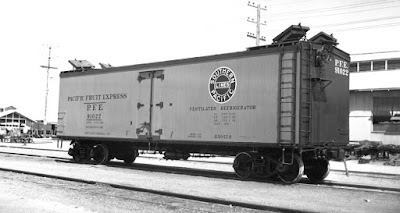 Hatch closures with this arrangement present their own modeling challenge, but that isn’t the topic of the present post.
When steel hatch covers were first introduced, they likewise had separate plugs like the older wood hatch covers, but soon the cover was designed so that the plug was part of it. You can see that on the builder photo below of a new PFE Class R-40-23 car (AC&F photo for PFE). 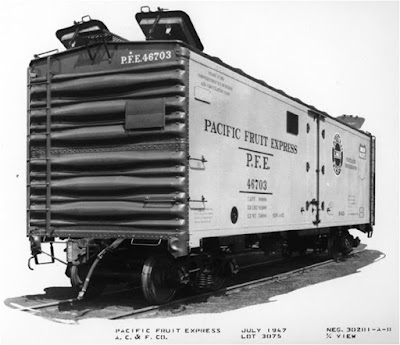 The car that I am working on modeling with open hatches has steel hatch covers, thus will have the plugs integral with the cover. As I showed in Part 1 of this thread (link to that post in the first paragraph of the present post), one can use the Red Caboose molding as-is, merely painting the plug part light gray. Then the underside of the sprue looks like this: 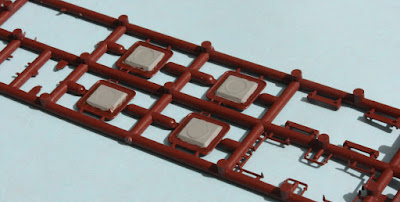 But as I also showed in that prior post, using the hatch covers this way ends up with almost an invisible hatch plug. I decided to try adding a rectangle of styrene to the bottom of each plug, and then again painting the plug light gray. They then looked like the photo below. Note that the plug edges are rather rough, but on the model they really are only “space fillers” under the open hatch cover.

I have used a variety of methods to install open ice hatches on my reefers. I tried a new one on this car. The idea was to put a spacer under the hatch, raising it to the desired angle, and then glue the hatch hinges to the “hinge bar,” my name for Part #4 on the Red Caboose Sprue A (the sprue shown in the above photos). Those bars are visible to the upper right of the hatch covers in the sprue shown in the first sprue photo. Then let the glue dry thoroughly before adding the latch bar.
My spacer was a Model Hobbies wood tie, as you see in the photo below. The tie is rectangular in cross-section, and I used it in the “tall” direction. That tie dimension is 0.120 inches, almost 1/8-inch, so any kind of wood or styrene piece of that size could be used. 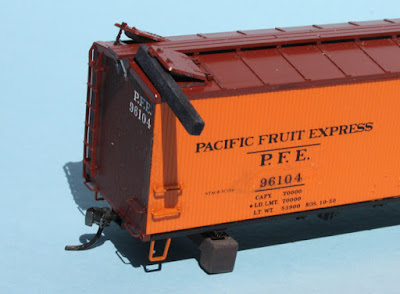 Incidentally, this model is renumbered from the “bad” lettering on the original Red Caboose decorated model, which had the number SP 96763, as shown in my post complaining about poor manufacturer lettering (see: https://modelingthesp.blogspot.com/2019/04/small-rant-manufacturer-lettering.html ). I renumbered it with Microscale set 87-501, with the excellent new Dick Harley artwork.
With the method shown above, I was able to glue all the hatch covers at the same angle. As I have mentioned in my first post about open hatches (the one with the link in the top paragraph of the present post), the opening angle should not be too large, often of the order of only 30 degrees. Here is my final appearance of these hatches. I like being able to see the hatch plug like this. The model in this view isn’t weathered yet. 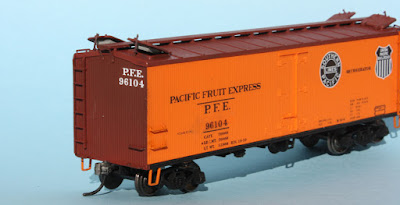 Another detail worth noting on this model is that I used the running board end supports from a Plano etched metal running board set. I also used the steel grid brake step from this step, as you can see in the photo below of the model upside down. The running board support will of course be painted. 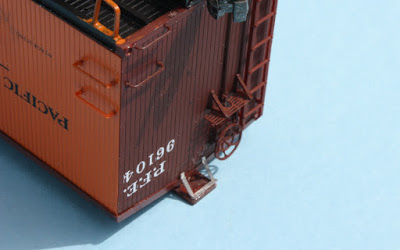 The next step was weathering. Since this is the 1950 paint scheme, and I model 1953, I chose to make the weathering fairly light. In fact, these cars got quite dirty, quite quickly, as former PFE employees told me in interviews, but as late as 1953, PFE was still washing cars. That means that for my reefer fleet, age of paint scheme usually will not correlate with degree of dirt on the car. Here is the finished car, with a route card and a few chalk marks.

This model with open hatches joins several other cars of the same class, R-30-9. I am now nearly done with my efforts to model the very large R-30-9 class of PFE cars. In all, this class contained 7694 cars, more than the total fleet of most reefer owners. Most of them, over 6900 cars, were still in service in my modeling year of 1953, so I need to operate a bunch of them. I’m almost there.
Tony Thompson
Posted by Tony Thompson at 6:47 AM