In the previous post on this topic, I complained about failure to read (or take seriously, or perhaps even understand) instructions for car spotting at industries. I showed the kind of information that switch crews have at their disposal, but nevertheless sometimes manage to misunderstand or ignore. That post can be found at: https://modelingthesp.blogspot.com/2019/05/sure-spots-part-4.html .
But I also recognize that there are some other spotting issues, beyond those in the previous post. These are in areas where I need to figure out how to convey information better. It seems obvious, at least to me, that a box car to be unloaded, for example, needs to be alongside an unloading platform, yet model railroad crews will sometimes spot the car well down the spur, away from the loading dock.
Now in the prototype, of course, such a car can be moved by local workers. One person I talked to told me that prying under a wheel with a crowbar would suffice to start a car moving, then it can be kept moving by a couple of men shoving to the desired spot. But you can be sure that the workmen would greatly prefer the car to have been spotted correctly in the first place, and if not, you can be sure that the local train crew will have been told about it.
A particular problem is spotting at house tracks and team tracks. By definition, a house track is located at a depot or freight house, and has an unloading platform or warehouse door. So when I have a waybill specifying spotting at a house track, the car should be spotted at the depot (my layout has no freight houses) and alongside the platform so that it can be unloaded. The example below is at my layout town of Santa Rosalia, and the Erie box car was supposed to be spotted at the house. Instead, it is really spotted on the team-track portion of the spur.

Obviously the house, meaning the freight section of the combination depot at right, is well away from the spot of this box car. So what did I want the crew to do? To spot the car at the loading dock so its cargo can be easily unloaded and taken into the depot. 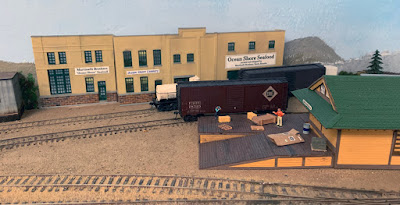 I have seen prototype waybills destined to the “agent, house track” or sometimes just “agent” at the town in question. This usually implies spotting at the house track, and the agent is to take custody of the cargo, likely having it moved inside the depot until the consignee can pick it up. But I prefer to identify the consignee on the waybill, as indeed is usual prototype practice.
This is something I emphasize in my briefing before an operating session. Consider the waybill below. 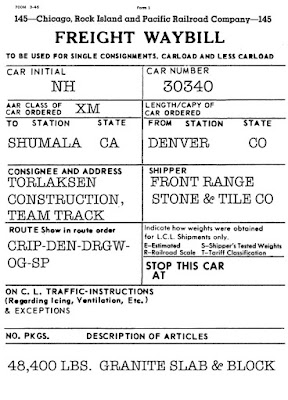 A switch crew may cry out, “I can’t find the Torlaksen Construction siding anywhere,” and I quietly point out to them that the waybill does say “team track” right on it.
This waybill, as it happens, is a good example of where a crew can usefully think about what they are doing with this particular load. By definition, a team track is a place where consignees can unload freight cars into or onto their trucks or other conveyances. (And, less commonly, to load their goods into freight cars for departure.)
This obviously means that there is flexibility in such spotting, even on our model team tracks, that are typically far shorter than the prototype. But even so, spotting a car so that it overlaps a nearby industry, or is virtually at the fouling point of the switch into the team track, would certainly limit unloading convenience. I only ask that crews take a tiny moment of thought to recognize how a car would need to be unloaded.
The waybill above describes a load that might be unloaded directly onto a truck, so it would be helpful to spot the car alongside a truck in the vehicle area at the team track, if one is already there, or alongside the obvious loading area. Shown below is an example of what I mean; the flat-bed trailer might well be in place to receive the pieces of granite. The car could have been spotted with its door alongside the trailer, acting as a loading dock. But of course, the truck can move as needed. 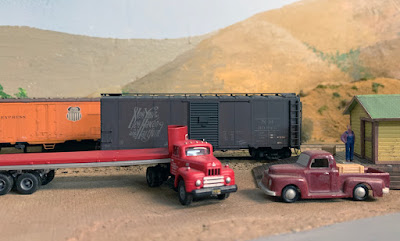 Visible at right, incidentally, is the very small freight shelter that I built for this team track, as described in an article for Model Railroad Hobbyist or MRH, in the August 2018 issue (that issue of MRH can be read on-line, or downloaded, for free from their site at: www.mrhmag.com ).
So instead of the truck, a crew might think that the small loading platform at this team track might be used by the unloading personnel, for convenience in moving the cargo. In that case, they might spot the box car as shown below. In this case, at least, either arrangement could work. 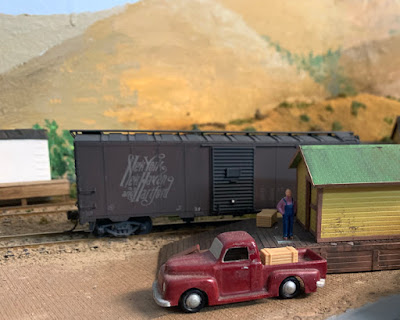 But as I’ve already mentioned, too often crews don’t think about spotting locations.
So enough complaining: what can be done to help? One option is to define sure spots within  locations such as team and house tracks, which would direct crews as to what to do. But as far as I know, this is entirely unprototypical. Instead, I will modify my briefing to direct them to try and recognize how a car will be handled. Certainly local crews did so; they very much had the convenience of the shipper or consignee at heart, and if they did not, their supervision would soon set them straight.
What else might I do? One possibility, beyond the briefing (which realistically has a limited impact), is to emphasize the use of the "information cards” for each town (for my prior description of these, see the third post in this series, at this link: https://modelingthesp.blogspot.com/2017/12/operating-with-sure-spots-part-3.html ). I will have to try this out and see how well it works for team tracks.
I will also expand the ideas behind my agent’s messages to crews, to make sure they correctly spot certain cars. This is prototypical, as an agent’s way of correcting crew errors in the past, sometimes very explicitly. I gave a number of examples of such messages earlier; you can visit my post at: http://modelingthesp.blogspot.com/2012/03/bill-box.htm .
Although I continue to regard these ideas about spotting cars as mostly common sense, I realize that not every operator has thought or is going to think about the needs of a shipper or a consignee at various locations, especially “indefinite” ones (as someone once said) like team tracks. I will continue to see how I can better convey these ideas to operators.
Tony Thompson
Posted by Tony Thompson at 7:32 AM